If you’ve ever been to Bali one of the first things you’ll probably recall is the prevalence of Bali’s unique dance and music culture. Balinese dance routines are an ancient tradition that represent religious and artistic expression amongst the Balinese people, and there are many different styles of Balinese dances. Today I’m focusing on Legong and Barong dances because they’re my favorite styles and I know the stories well.

Balinese dancers learn how to dance from their mothers at a very early age. Official training for Balinese dancers starts at the age of seven, but there are plenty of stories of young girls starting as early as four years of age. The movements of these dances are closely associated with the rhythms of the gamelan, a musical ensemble from Indonesia-specifically from Bali and Java-that features a variety of instruments such as metallophones, xylophones, kendang (drums), Javanese and Balinese gongs, bamboo flutes and bowed strings.

Here’s a link to a video of a gamelan musical performance in Ubud, Bali…

Now picture a slender young dancer with dark painted lips and kohl-rimmed eyes. She is beautifully dressed in gold brocade and colorful accessories with an elaborate golden headdresses crowned with frangipani perched atop her head. The headdress alone looks too much to bear, and when you stop to consider the difficulties associated with this dance, you’ll marvel once again when you see the dance performed in its entirety. Each movement she makes stays in time with the rhythms of the gamelan and is expressed in several levels of articulations through the dancer’s face, eyes, hands, arms, hips and feet. She thrusts her head forward as her eyes open wide and then dart back and forth quickly; her hands move into various positions and gestures that tell the story without words. Even the way the dancer positions her feet is important. It truly is a mesmerizing sight, and it’s one you won’t want to take your eyes off of because you’ll be afraid to miss something. 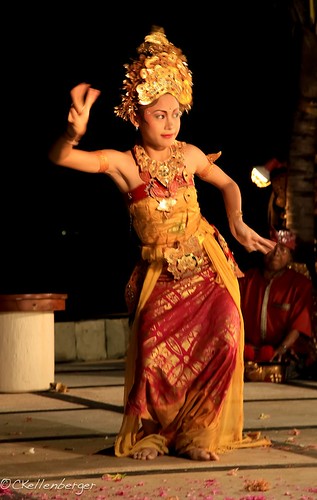 Legong, also known as the dance of the virgins, is a classical dance form characterized by facial expressions, expressive gestures, intricate finger movements and slow-moving footwork. It is thought to have originated some time in the 19th century as a form of royal entertainment. Others believe it originated from a ceremony involving voluntary possession of two little girls by the good spirits of Bali. Legong is the face of Balinese culture. Wandering the streets of Bali, you’ll see magazines, posters and artwork covered with divine nymphs dressed in traditional legong attire. This is the dance that is used to promote Bali and Balinese culture to the outside world, and the dancers are highly regarded in society.

Every village in Bali has its own traditional variation of the Legong, and it is often performed to praise the gods and to welcome guests.

The dance of the virgins is always performed by three young prepubescent girls who adopt the roles of royal persons. The most common tale told is that of the King of Lasem who finds a young girl lost in the forest one day. He takes her home and locks her away. The girl’s brother is the Prince of Daha, and when he learns of her captivity he threatens war unless she is set free. The girl begs her captor to let her go, but he only wishes to fight. On his way to battle, he is met by a raven that foretells his death. Shortly thereafter, he is killed on the battlefield.

This story is reenacted with a number of different movements. The tiny dancers dip down to the ground and rise again, heads held high while fingers flutter in unerring precision. They flow from one character to the next without disruption.

It truly is a masterpiece to be seen. 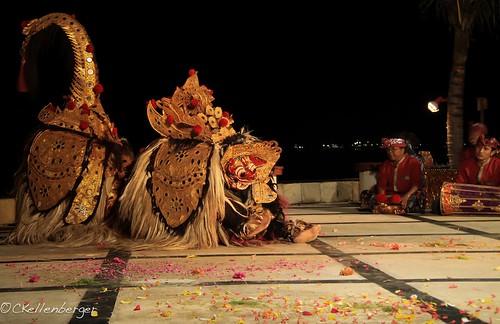 Barong tells the classic tale between good and evil. The focus of this dance is a shaggy semi lion called Barong Ketet. This fun loving and good-natured mythological creature of Bali is the King of Spirits, the leader of the good, and enemy of Rangda, the demon queen of Bali. The Barong dance almost always features a battle between Barong and Rangda, but for a comical element, some times the dance focuses on the adventures of Barong and his two monkey friends who always get into trouble. Barong constantly has to rescue his friends.

The Barong tells the story of Rangdo, the mother of Erlannga who was King of Bali in the 10th century. Erlangga’s father condemns Rangdo because she practices black magic. To get her revenge, Rangda summons her evil spirits and demons to go after Erlangga.

Eventually Erlangga realizes that his troops are not strong enough to withstand the demon horde, so he begs Barong Ketet for help just as the demon queen casts a spell of death on the soldiers. She makes the soldiers try to commit suicide, but Barong casts a counter spell that makes their bodies resistant to sharp objects. The dance concludes with a final battle between Barong and Randga. In the end, Rangda runs away and order is once more restored. 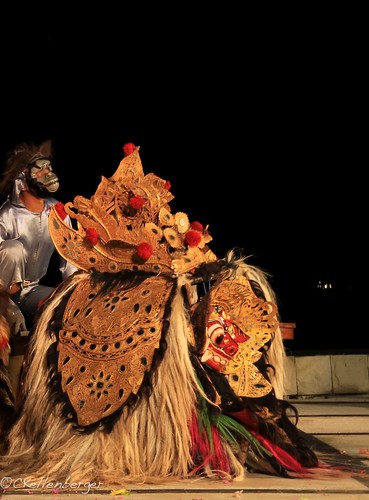 And last but not least, I have an honorable mention to share for my third favorite style of dance in Bali. 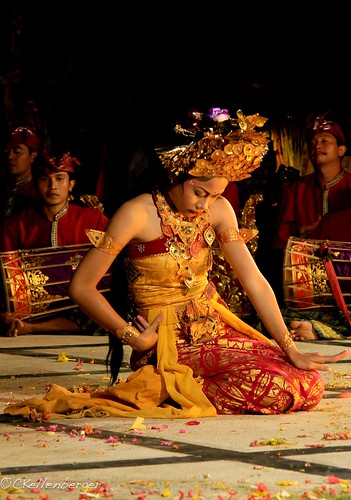 Oleg Tamulilingan tells the story of two bumblebees playing amongst the flowers in a garden. They zip from blossom to blossom, getting drunk off the heady nectar. The lovers play and eat for hours on end, completely entranced with one another in their Garden of Eden. This dance showcases the expression of a handsome young man falling in love with a beautiful woman. At the end of the story, they find true happiness.

Samabe Bali Suites and Villas: A Luxury All Inclusive Resort in Bali