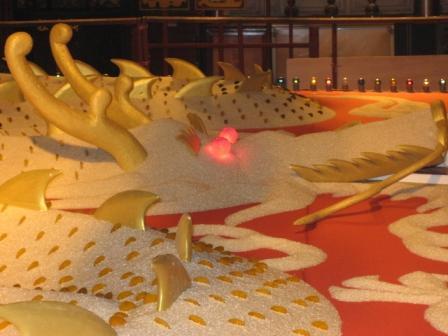 We were heading home on the bike the other day and were crossing a bridge, when I noticed some extremely bright lights on the far bank. For us to even notice a bunch of extra lights in the neon world of Taipei is pretty rare, so we figured we’d better see what all the fuss was about. Sure enough, it was a big fuss. We’d been lucky enough to stumble on some sort of Taoist street festival. There was enough power and energy here to light a small country.

The lights and street action resembled a carnival from back home, only without the crazy merry-go-round music and annoying vendors. All of it, of course, with a distinctly Asian flavor. We stopped to watch a man using a blowtorch to blow tiny glass pigs. We saw another Chinese artist creating gorgeous traditional landscapes with a huge crowd of on-lookers backing him. We wandered from one huge light display to the next and had a look at a few of the carnival games that were rigged up in the booths along the sides of the road. Carnival games are the same all over the world, but John couldn’t resist giving it a go.

As usual, we never have to wait for long before natural curiosity kicks in. We stuck out like sore thumbs and were approached by a good-natured elderly couple who wanted to show us around. They took us to see all the light displays and finally dropped us off at the local Taoist temple, to pay our respects to the gods.

Imagine our surprise when we found this gorgeous dragon waiting for us inside the courtyard. We were awestruck to discover it was made out of rice. My eyes are permanently dazzled from the spectacular array of new things we see each and every day. Taiwan constantly assaults the senses in all the good ways. This is why I love Taiwan.