Slums Around the World

“With over one billion poor people living without adequate shelter and basic services in slums and squatter settlements, the challenge of the urban millennium is to improve the living environment of the poor … we must all dedicate ourselves to the task of ensuring that, one day, we will live in a world of cities without slums,” – Mrs. Anna Tibaijuka, Executive Director of UNCHS (United Nations Center for Human Settlements – Habitat).

It is estimated that more than 1 billion people around the world live in slums. By 2030, the world’s slum populations could rise to 2 billion if no action is taken.

The markets in their slums sell sour milk, tainted chicken, and spoiled meat. Most have never tasted fresh water and many suffer from starvation and the ravages of diseases, such as AIDS and malaria.

According to Dr. Tibaijuka of UNCHS, slum-dwellers not only live in misery, but their plight often goes unnoticed as the traditional focus tends to be on the rural poor living in developing countries.

The definition of a slum or squatter settlement varies greatly from country to country, however they all have several things in common.

Slums are considered to be a residential area in an urban geographic area that is inhabited by the extremely poor who have no tenured land of their own.

These people end up squatting on vacant land, which is either private or public land.

For the poor, urban areas have always provided a means of improving quality of life, as well as being in close proximity to better jobs and incomes.

Deteriorating conditions for those who live a rural lifestyle and the promise of a better life have prompted millions of rural inhabitants to migrate to cities.

However, one of the first problems that must be faced is the question of adequate housing. With little money, education, and few marketable skills, the only option available to many urban migrants is to illegally build shelter on a vacant piece of land.

This problem is compounded by the uncaring attitudes of various government agencies, who view the development of squatter settlements as something that needs to be eradicated.

Because of their illegal status, public services within these areas are less than adequate or don’t exist at all.

A water supply, electricity, sanitation, roads and drainage; schools, health centers and market places can all be absent in these communities or operate at a minimum level.

Often, water supply to individual households is unavailable. In some cases, public water pipes may be provided, but often these pipes become laden with excrement and refuse.This fetid water is what people use to drink and bathe in.

Similar arrangements may be made for electricity, drainage, and toilet facilities. There is very  little dependence on public authorities.

As a result, these areas become a breeding ground for germs and disease. Inhabitants live in squalor. Kibera Slum in Nairobi, Africa, is one example of a slum that operates without any kind of public garbage disposal. Inhabitants literally live on top of their trash.

A “squatter” (in The Concise Oxford Dictionary) is a person who settles public land without title; a person who takes unauthorized possession of unoccupied premises.

Therefore, a residential area occupied by squatters becomes a squatter settlement. But the narrow generalization, especially of settlement type is evident: everything from a brick-and-concrete multistoried house to a “occupied” cardboard carton become “squatter settlements”.

Encyclopedia Britannica defines a slum as “…residential areas that are physically and socially deteriorated and in which satisfactory family life is impossible. Bad housing is a major index of slum conditions. By bad housing is meant dwellings that have inadequate light, air,toilet, and bathing facilities; that are in bad repair and improperly heated; that do not afford opportunity for family privacy; that are subject to fire hazard and that overcrowd the land, leaving no space for recreational use…..”

A few words on some of the world’s biggest slums:

Dharavi is a slum that spreads out over parts of the Sion, Bandra, Kurla, and Kalina suburbs of Mumbai, India. Situated in the heart of the world’s third largest city, it occupies an area of 500 acres and has a population of between 600,000 and 1 million people.

READ:  Travel is glamorous only in retrospect when traveling in Cambodia

It continues to grow each day. Dharavi exports goods around the world, and the total turnover of these exported goods is estimated to be more than $650 million US dollars each year.

The re-development of asia’s largest slum has stalled due to the global economic financial crisis. 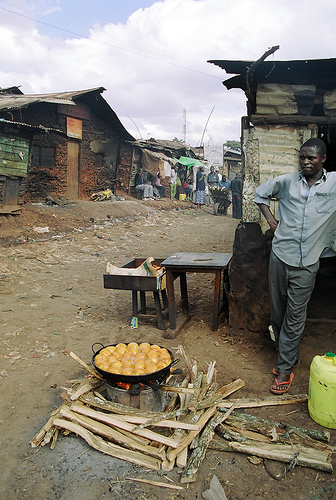 Asia’s largest slum is located in the northwestern part of Karachi (Pakistan). Its inhabitants are from a number of different ethnic groups. The population of Orangi Town was estimated to be more than 720,000 at the 1998 census.

Kibera can’t be found on a map, yet at least 550,000 Nairobians – one out of every five – call this area home. Kibera is home to 60 percent of Nairobi’s populations.

Kibera does not receive public services, including public waste collection. In some parts, shelter has literally been built on trash. The waste includes excrement, which fills the muddy streets and contaminates the water.

The health hazards arising from the garbage are evident as soon as you enter the slum. Infectious diseases are on the rise and malaria is a huge concern at the moment.

No one is sure exactly how many people live in Kibera. It is estimated that there are 750,000 people in one square mile. It is one of the most crowded places on earth.

A shanty town in Brazil is called a fevela. These crowded shanty towns differ slightly from slums in terms of origin and location. Slums are created from rural migrants coming into the city.

READ:  Learning How to be a Citizen of the World

Many favelas have electricity these days, but these areas are virtually inaccessible to vehicles. They consist of irregularly self-constructed housing that are illegally occupied and often built one on top of another.

They consist of an ad hoc network of stairways, sidewalks, and simple tracks which allow passage through them. Many of them are built haphazardly on hills that overlook the city’s prosperous neighborhoods. The gap between poverty and wealth has never been so well-illustrated.

The 2008 Oscar-winning film Slumdog Millionaire has brought the day-to-day misery of slum-living to our doors, but is the world ready to do something about it? This remains to be seen. One thing is for certain, something must be done.

How you can help:

Contact UNHABITAT – For a Better Urban Future to find out how you can help to stem this growing crisis.

Habitat for Humanity’s has a vision of a world where everyone has a decent place to live. You can help Habitat realize that vision on a Global Village trip.

Global Village seeks and mobilizes volunteers for a life-transforming experience, both for the volunteers and for the families whose homes they help build. Global Village provides a platform for volunteers to travel across international borders and work in communities outside their homelands.

These photos are courtesy of the photographers on Flickr who have released their images through a Creative-Commons license.

Chronic Pain Quotes That Pain Patients Can Relate To

When life has you down and you're not sure if you have words to describe your pain, you can trust that someone somewhere has helped....

52 thoughts on “Slums Around the World”