Last January, I was going through some personal struggles with health (as usual) and I made a very quick decision about getting inked in Taipei again.

Some of you may remember me posting about getting inked in Taipei in 2009. I got a hummingbird. Follow the link to Needle No 8 at the bottom of this article if you’d like to learn a little more about my experience there. It’s a great tattoo shop, and I have sent plenty of friends there, but there is always at least a two-week wait time with this shop.

This time, I didn’t want to wait. If you’re into tattoos, then you know that once that urge hits, the itch needs to be scratched asap, so I decided to try an outdoor tattoo shop in Ximending, called Kevin Tattoo, which is 12 minutes from my home. I’ve never been to an outdoor tattoo shop before, so the experience alone would be worth it, plus everyone recommends these shops!

All in all, I have nothing but great things about Kevin Tattoo and United Tattoo in Ximending.

Kevin Tattoo was opened first, and its sister shop, UNITED TATTOO opened a while afterwards. I have been bringing all my friends to UNITED TATTOO because I love Adrian’s tattoo work and I can’t recommend him enough.

Kevin, the man who owns both Kevin Tattoo and United Tattoo in tattoo alley in Ximending is famous throughout Taiwan.

His tattoo artists are fantastic. They create your tattoo on the spot, and then they draw it on you, which is something I’ve never seen before. The other tattoos I have were all transferred onto my skin first by paper and then completed.

You can see the drawing of my sister’s tattoo before Adrian started her tattoo below. In the top left photo, he is crouched behind her drawing on her forearm freestyle. Pretty cool, right? 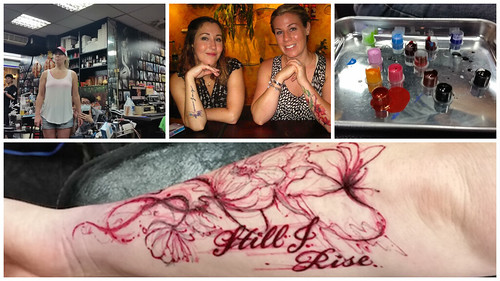 This is an outdoor tattoo shop, which means that the front end of the shop is open with thousands of people walking by all day. They roll a gate down at night to keep the shop safe. There are a few dogs and a cat in the shop as well, but everyone is friendly and easy-going, and the animals are nice.

The shop is surprisingly very, very clean. Plus they have lots of cookies and chocolates to help you keep your energy up during your session.

Everyone was so impressed with my new forearm tattoo (which doesn’t hurt in this area, by the way), I ended up sending four friends to see Adrian at the shop within a month of getting my dragonfly.

When I went home this summer, my sister, who has seven tattoos, said she had seen nothing like it, so when my sister came to Taiwan in September, the first thing she wanted to do was go and see Adrian at Kevin Tattoo’s sister shop UNITED TATTOO in Ximending.

She got hers in the same place, so now we match.

A little about my first new tattoo at UNITED TATTOO:

The dragonfly, in almost every part of the world, represents change and transformation. Dragonflies also represent joy, adaptability, and lightness of being.

I have been in constant, never-ending chronic pain for many years. Pain changes you and, at times, I get depressed from the pain which never seems to end.

My tattoo incorporates the word ‘joy’ into the tail of the dragonfly, which helps me to remember to find joy no matter were I am.

Many thanks to Anna for translating my tattoo idea perfectly to Adrian. I am so impressed with Kevin Tattoo. You exceeded my expectations for a very reasonable price. Thank you so much for this my beautiful and original tattoo. I will be back!

Here is my second tattoo at UNITED TATTOO, done by the amazing Adrian once again. This man could tattoo my heart if he wanted to. He is fantastic.

This is a new tattoo that I got on August 19, 2017. It’s my second tattoo with Adrian at UNITED TATTOO, and I’ve brought about a dozen people to him since I got my dragonfly tattoo a few years ago.

This is a black beauty peony, a flower of healing and used for inflammation in TCM, named after Paeon, physician to the Greek Gods. It is said that Paeon discovered the plant’s many curative properties.

It is revered in the east and west. My mom has grown peonies for as long as I can remember and my sister had them in her wedding bouquet, so this carries a lot of significance for me.

This is my first flower tattoo. I tend to lean towards things with wings and cats. Anyways, there is a plan in motion now for both arms.

Coincidentally, the blood techs will have no problems finding my veins with this arm. All they have to do is follow the line.

I got my first tattoo in Taiwan in September 2009 at Needle No 8 Tattoo Shop in Taipei. Read more about it here. Obviously I chose a hummingbird because it’s my site emblem for My Several Worlds.

Where to go if you want to get inked in Taipei or Taiwan:

Kevin Tattoo and United Tattoo are owned by the same person and they are right across the alley from each other.

READ:  International Day of Persons with Disabilities in Taiwan - 3 December

Finally, I’d like to mention that Taiwan is very serious about its tattoo culture. If you’re coming here to get inked, I strongly recommend visiting during the annual Kaohsiung Tattoo Convention, which is held every year in March or April. This event draws thousands of people (and tattoo artists) from all over the world.

Hi, I’m Lynne. I live in Kingston-upon-Thames, England. Homelife is pretty chaotic as I am a single mum living with my four teenage...

Learning About Men with Fibromyalgia with Marco Mizrahi

I'm so pleased to say that we're back with another MSW Interview. Today we are learning about men with Fibromyalgia with Marco...

5 thoughts on “Getting Inked in Taipei: Kevin Tattoo/UNITED TATTOO”