Getting Inked in Taiwan: Needle No 8 Tattoo Studio

Ta-da! My new tattoo is almost healed.  This was my first time getting inked, and in Taiwan no less! While I was at dinner at Dozo, my favorite restaurant in Taipei, I noticed that they have a similar hummingbird for their logo. I still like mine better though.

My tattoo was done at Needle No 8 Tattoo Studio in Taipei by Benjamin, the shop owner, and Mason, my tattoo artist.

So, a little about my new tattoo: 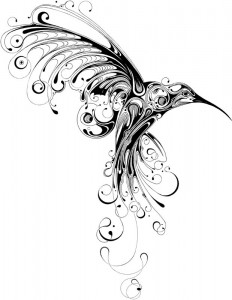 The original design for the tattoo was based off the artwork of Si Scott, a graphic designer and illustrator from Manchester.

I chose the hummingbird as a reminder to myself to always seek the joy in life. Hummingbirds are thought to represent peace, love, and happiness. These tiny little birds are often called new world birds because they are native to North America, Central and South America. I really liked the idea of getting a tattoo that represents my North American heritage.

The ancient pagans believed that hummingbirds were sacred because of the tireless energy. They remind us to find the good in life and to seek beauty each and every day.

Hummingbirds are also incredible travelers, and have been known to fly as far as 2000 miles to reach their destination. This quality teaches us that we should always show persistence and determination in following our dreams and living out our lives to the fullest.

Where to go if you want to get inked in Taiwan:

There are dozens of tattoo studios in Taipei, including a special area of tattoo studios in the back alleys of Ximending. However, I chose to go with Needle No 8 Tattoo Studio because they came recommended by a friend. She had a stunning tattoo done on her back last year and I didn’t need much convincing after I saw hers.

I went in knowing the original design had too much detail for a tattoo, so I asked the artist, Benjamin, to leave in as much detail as possible. I also wanted bright jewel tone colors incorporated into the design mainly because I’m planning to add a peony to it within the next year.

Mason did the actual tattoo work in under four hours. A word to the wise, while Mason doesn’t speak any English, Benjamin’s spoken English is quite good. He will be the first to tell you that he doesn’t speak English, but be persistent. I promise, he knows far more than he lets on. He’s just a little shy.

As it turned out, I arrived on the evening of my appointment just as Benjamin and Mason were finishing up with their latest customer. After chatting with him for a few minutes, he revealed that he was from Brunei and the ONLY reason he was in Taiwan was because he wanted his tattoo done by Mason and Benjamin. Apparently, these guys are well known throughout Asia for their artwork and expertise. Hearing his story was like music to my ears.

Since I got my tattoo, I’ve sent a number of friends to see Benjamin and Mason at Needle No 8. They specialize in cover-ups, but they also have an incredible artist on site that does black and white portrait work as well.

60 thoughts on “Getting Inked in Taiwan: Needle No 8 Tattoo Studio”