The 24-hour day of insanity began at 8am when the Gs picked us up in Banciao and we drove four hours straight to Kaohsiung to attend the 7th Annual Kaohsiung Tattoo Convention, which was hosted this year by A-Tai from TOP-TATTOO Studio in Kaohsiung City, Taiwan.

We arrived early on Friday afternoon and by the time we arrived at the show, there was already some serious inking happening.

The five male models in the second photo below were the main attraction on Friday. They were up on stage for the better part of an hour before taking a rest right across from the booth that I was getting my tattoo at.

I ended up getting two tattoos by Man Yao. I got my first tattoo of a galaxy cat at this convention and then I went to see Man again to get my second tattoo because I really admire his microdot tattoo work. I don’t know any other tattoo artists that do the kind of specialized tattoo work that Man does.

This butterfly tattoo is in honor of Ankylosing Spondylitis and Myalgic encephalomyelitis awareness. These are two chronic illnesses that I suffer from on a daily basis and the reminder is on my arm to remember that out of the greatest suffering can come unimaginable beauty. 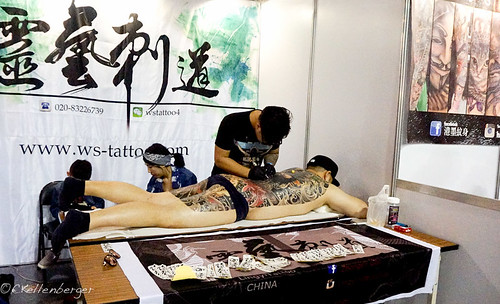 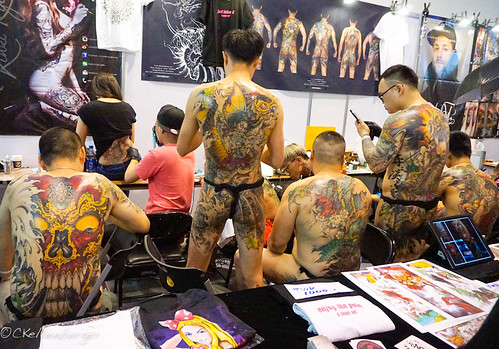 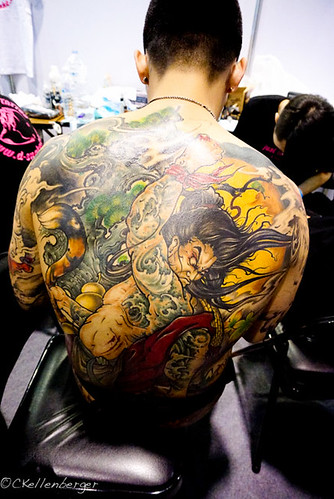 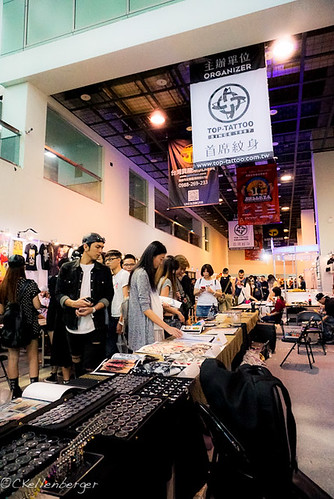 These events are always popular and well attended. I have read that they are getting bigger every year, with a large portion of the proceeds from their admission sales going to charity organizations in Taiwan.

I have written about getting tattoos done in Taiwan in the past. I’ve added two new inks to the first tattoo that I got of a hummingbird at Needle #8 Tattoo Shop. I’ve sent many friends there over the years.

I’ve always wanted to go to this tattoo convention, but John has never been interested, so when the Gs asked us if we wanted to go with them, I was all in. John was a little reluctant to begin with, but he liked the idea of a road trip. No one was more surprised than me when he got a tattoo. He got swept up in the fever of it all and ended up with a gorgeous tattoo that was done by the same artist I went to see. He doesn’t really like when I post photos of him, so please trust me when I say it’s a great tattoo.

Travel of any sort has become a bit more rigid for me since I became ill. This means that I plan out all of my activities in advance to conserve energy. Some might call it obsessive compulsive, but knowing what I’m walking into each day is a huge part of life for me.

I knew I couldn’t spend hours walking around the convention trying to decide which artist to go with, so I looked through the entire website and all of the artist portfolios to find the artist that I wanted to meet, and thus when we arrived at 3pm, I went straight to Jess Yen’s booth and asked for Man Yao. 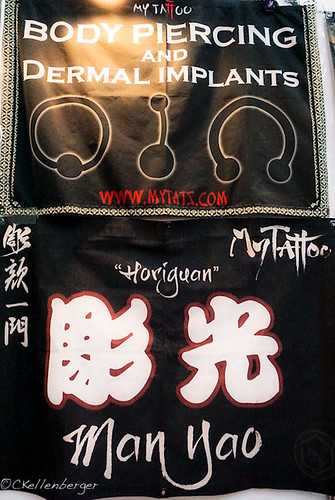 My friends seemed a little surprised that I dove in so quickly, but I knew what I was in for and I didn’t want to waste any time. I also didn’t plan on returning to the convention on Saturday because it’s always the busiest day.

Soon enough, my husband and our friends had decided on their tattoos and we all ended up at the same booth – Jess Yen of My Tattoo in LA. Jess Yen was born and raised in Taiwan and he has over 16 years of experience in tattooing. He has a devoted and loyal group of phenomenal artists that work with him and they are known as the My Tattoo Family. 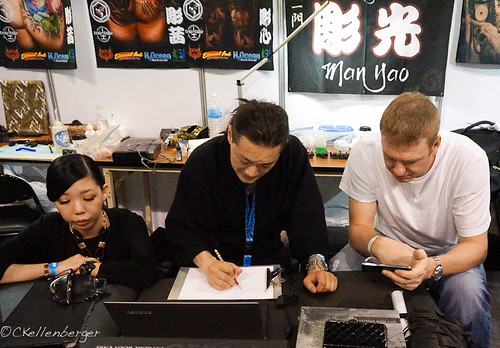 Here is a photo of Man Yao and John working on John’s shoulder tattoo. 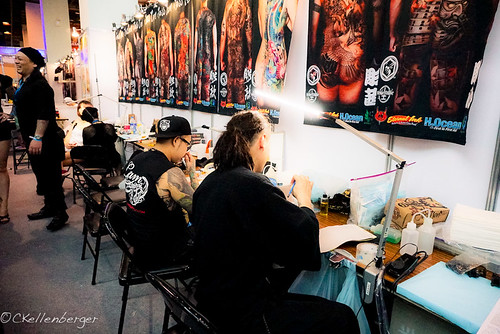 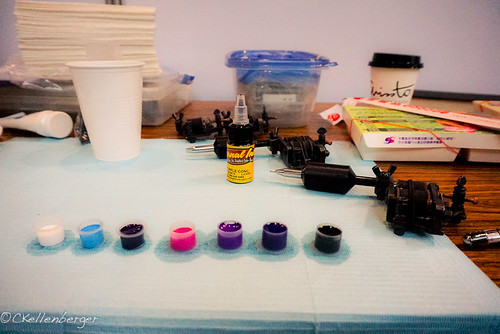 I specifically wanted my tattoo done by Man Yao, who was also born and raised in Taiwan until he moved to LA. He is such a nice guy! He is really easy to talk to and he did his design work incredibly fast. All in all, my experience with Man Yao was great. Man Yao is known for his one-point work, which is a very unique style of tattoo work. I was very tempted to get another from him, but we didn’t have enough time. Perhaps I’ll see him in the future at their LA tattoo shop.

We were at the Kaohsiung Tattoo Convention from 1pm to about 9pm on Friday night, just before the massive crowds arrived for the biggest part of the show on Saturday. We were really lucky to get our tattoos on Friday as Jess Yen’s team was already fully booked for Saturday.

I would advise booking in advance if you know which artist you want to go with. I’d like to extend our sincere thanks to Jess Yen and his team. They were terrific hosts and I can’t imagine how tired they must’ve been after doing endless tattoo work for the entire weekend.

We were all so tried after all that driving and tattooing, we decided to head out early the next day. We made a short stop at Lotus Lake on Saturday morning to see the lotus flowers before heading back to Taipei. (Photos from our stop at Lotus Lake are on their way!)

All in all, our trip amounted to four good friends and four awesome tattoos in a 24-hour time period. Unforgettable. Thanks for driving, A. 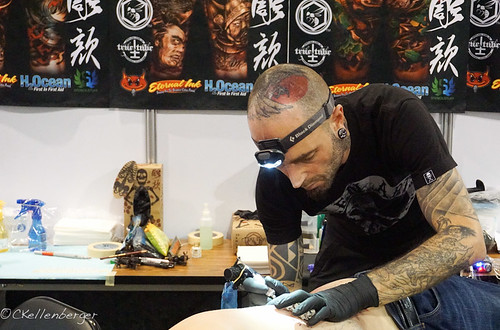 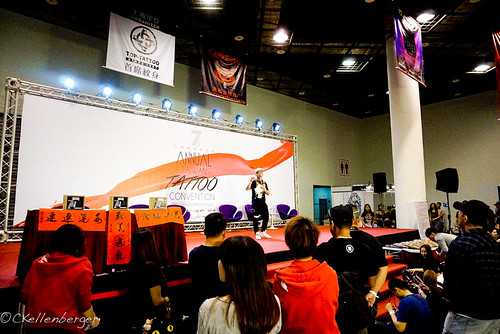 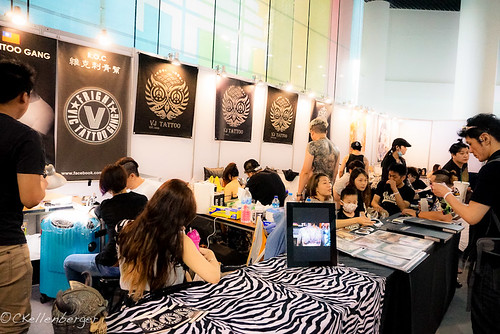 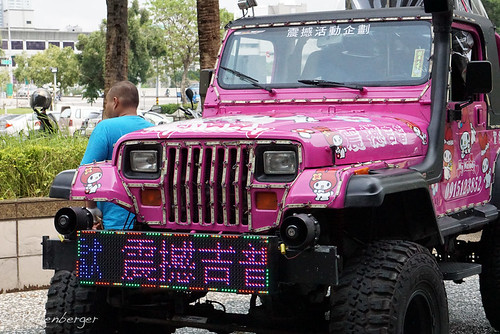 Who can resist a photo of a bedazzled Hello Kitty Hummer? Not me. Only in Asia.