Happy Year of the Goat! Lunar New Year in Taiwan

It’s the Year of the Goat.

We are celebrating our ninth Lunar New Year in Taiwan. Well, technically it’s our sixth if you count the times we left Taiwan for a beach vacation, but you know what I mean!

Additionally, I’m two years into my first full zodiac cycle in Asia. I moved here in 2003 and saw the completion of my first 12-year zodiac cycle last year. 13 years ago, SARS was just getting started in China when I moved there, and 12 years ago, it was drawing to an end.

The Year of the Goat officially began last night at midnight. This year, we are staying in Taipei. John’s mom has been with us since early January, and we are going to enjoy her last few days here with some peace and quiet – until the fireworks start, that is.

Last year was the Horse’s year to speed off and accomplish things, but this year, the goat reminds us to contemplate over what we have succeeded at and to appreciate what we have accomplished. The goat also reminds us to keep looking ahead, remain on a steady path, be generous, and keep the peace.

My birthday horoscope is a goat – I’m a Cappie – so I’m hoping that some of this year’s good goat luck rubs off on me.

Given that this is supposed to be a year of contemplation and reflection, I thought I’d reflect on some of my past holidays celebrating Lunar New Year in Taiwan.

We were still recovering financially from a three month backpacking excursion around Southeast Asia, but we have never been ones to miss a travel opportunity.

Our first day out on the bike was just beautiful. It was sunny with clear blue skies. That first half-day was bliss, but things got much colder when we hit Hehuan Mountain at 4pm. We were warned at the base of the mountain that cold weather was closing in fast, and boy, did it ever!

It was slippery going up the mountain, and it was great to reach the peak – Wuling Peak, which is the highest road in Asia.

But it was COLD coming down and by the time we hit Cingjing, all we wanted was some hot tea and a bed. Our journey that year took us into Sun Moon Lake, and across Toroko Gorge for the first time. We traveled back to Taipei along the Eastern Coast Highway.

This was the trip that convinced us that we needed to stay longer in Taiwan.

We enjoyed our 2007 motorcycle excursion so much, we decided to do it again for Lunar New Year 2008.

That year we traversed the Southern Cross Island Highway from west to east. Since we had a limited amount of time off, we decided to put the motorcycle on the train to Tainan.

We arrived in Taiwan at 10:30am, and John had the bike packed and ready to go by noon. We were lucky once again to be blessed with gorgeous weather and our journey took us high up into the mountains. We spent a night at Baolai Hot Springs and headed out the next day for the peak of Meishan in Yushan National Park. From there, we traveled down into the East Rift Valley, famous for its lush, green rice paddies and haunting scenery. We stopped and spent Lunar New Year’s Eve in Hualien.

In 2009, we were still recovered financially from our wedding in Mexico. This was the first year we choose to spend LunarNew Year at home in Taipei.

Lunar New Year 2010 was the Year of the Tiger, which is my animal zodiac sign.

We headed to the Philippines for a delightful beach vacation in Puerto Princesa that year. This was one of my first official trips as a freelancer travel writer.

We spent our 2011 Lunar New Year in Kota Kinabalu in Sabah, Malaysian Borneo. The Lunar New Year is the most important festival in the Chinese Lunar Calendar, luring thousands of friends and families to participate in games and watch Lion and Dragon dances, martial arts demonstrations and other fun events. We witnessed no less than three lion dances in various areas throughout Kota Kinabalu. 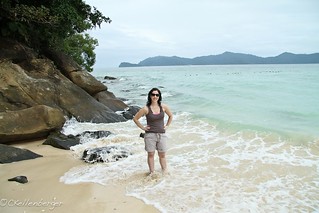 Our 2012 Lunar New Year celebration was spent in Seoul, South Korea. Seoul is an interesting city, and although I’m not big on Korean food, I really do love the architecture there.

In 2013, we spent our Lunar New Year holiday with friends in Kenting National Park in Southern Taiwan. John and I took off on our own in the car. We met up with my friend Leanne McNulty in Kaoshiung, and from there we traveled to Kenting, where we met up with Rachel and Tamin Wang.

2014 was a quiet year for us. We stayed in Taipei again this year. Having spent close to three months in North America because of trips and family obligations, it was nice to spend our Chinese New Year at home with our Taiwan-family. We took a few weeks off in April to visit Bali and Lombok, Indonesia.

2015 is much the same this year. Having our own business in Taiwan would normally allow us to have this time off, but Reach To Teach doesn’t close down over the holidays because we work with schools in other countries that don’t observe Chinese New Year.

I’m manning the office front this week while John is in Korea picking up a group of teachers that are arriving for their first year of teaching abroad in South Korea.

I’m not working too hard, as you can see. My mother-in-law is here and we have been exploring the markets in and around Banciao over the past two days. She is due to leave Taiwan tomorrow evening, so you never know, some fun excursions could be right around the corner!

1 thought on “Happy Year of the Goat! Lunar New Year in Taiwan”