This post is for my dad, who loves nothing better than to spend family time at the cottage.

The pitter patter of light summer rain on a hot tin roof and the slap of bare feet against a wooden dock are sounds that take me back to my childhood.

As a young child, there wasn’t anything I liked better than spending my summer up at the family cottage on Lake Nipissing in North Bay, Ontario. My parents were both teachers, and come the last day of school, we’d pack our bags up the night before and hightail it out of town the next morning at the ‘early’ hour of 8am with cats and dogs in tow. It was usually closer to 9am, though, because my dad likes to sleep in.

We learned that lesson well from him when we were kids. To this day, my mother is still the only early riser in our house.

Back then, we traveled in a giant Suburban that looks kind of like this, only ours was painted burgundy.

We three kids would spread our pillows and blankets out in the back of it, and we’d lie there in the sun and count cars and sing along to my Dad’s ZZ Top tape. ABBA, Dire Straits, and Wilson Philipps were also frequently played during those journeys, so much so that we knew those albums front and back.

It was during those long summer road trips that I caught the travel bug.

The journey there was every bit as important as the places we were headed to together as a family.

We always took the back roads from Carleton Place through to Almonte before making a pit stop at MacDonald’s in Arnprior. I’ve never been a big fan of sausage and egg McMuffins, but no one else in my family can pass them up, and we all believed in being well fortified for our four-hour journey along Highway 17, also known as the TransCanada Highway. This highway follows the Ottawa River along the old fur-trading route, passing through pretty little town after pretty little town.

Two hours later, we’d stop at the Laurentian Diary and Ice Cream Shop in Deep River, where my brother, sister and I would make short work of their famous Pig’s Trough. We’d move on through Mattawa, home of Big Joe Mufferaw. The highway here snakes through rugged Canadian Shield all the way to Manitoba. From time to time on our way home, we’d stop at Myrt’s Grill, which I first remember visiting with my grandfather when I cwas just a little girl. We always looked forward to their diner style milkshakes, thick cut fries, and juicy hamburgers. They pack a mean turkey and gravy sandwich too.

Eventually we’d start seeing more and more signs for North Bay, which sits on the eastern end of beautiful Lake Nipissing. North Bay is the largest city in this area, but it’s still very much a small Canadian town in a lot of ways. Summer beach homes and cabins stretch along the shoreline, and the Aboriginal tribes that live in this area have been here for around 9,400 years. The area is rich in cultural heritage, and it is also a beautiful place to vacation at during the summer.

Our family cottage is nestled in Tillicum Bay.

There are a number of cottages for rent in this area, including Cozy Cove Cottages, which are probably the best known cottages in the area. Idle Tyme Fishing Camp is also in this area, and it offers some of the best fishing expeditions on the lake. People really love cottage life on Lake Nipissing, and some of  the families who own cottages here have been here for generations, like my family. 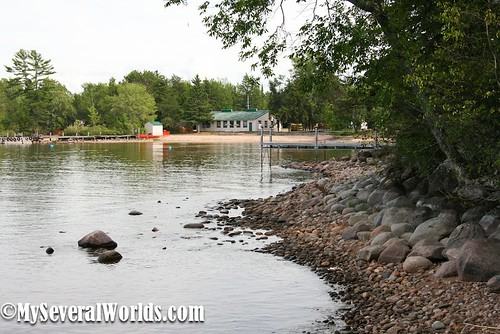 Tillicum Bay YMCA. This used to be a cadet camp. When I was a little girl, we used to hate to be woken up by the sound of a bugle playing Reveille. 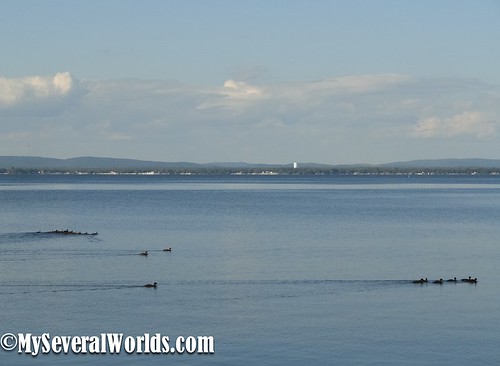 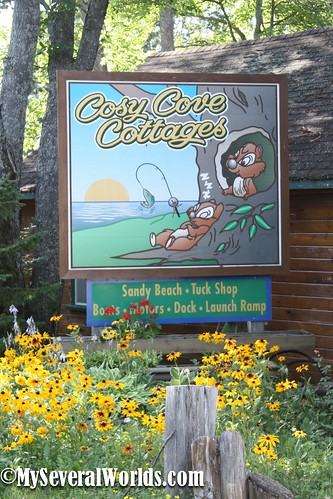 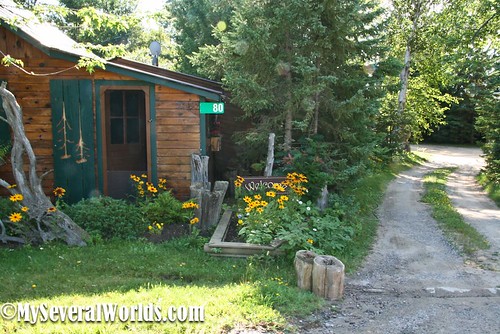 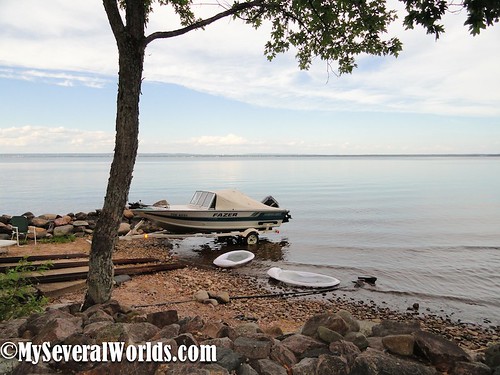 Nippissing is also referred to as the gateway to northern Ontario, and it’s one of the best fishing lakes in Ontario. Some of the trophy fish coming out of its waters are frickin’ huge. Nippissing is well known for its giant muskie, walleye, Northern Pike, and Jumbo Perch, to name a few.

For those of you who don’t know your fish, consider this photo. A muskie is big enough to pull your canoe around the lake for a few hours, which is exactly what happened to my brother when he went fishing in our bay several years ago!

Check out the size of that fish! Eek! Once I found out that those were sharing the same water I was swimming in, I became a lot more careful about where I put my toes in the water.

Ice fishing is also a popular activity on Lake Nipissing. I’ve never stayed on Nipissing much past November, but my brother was an avid outdoorsman, and there’s nothing he liked better than being up at the lake to ice fish throughout the winter. 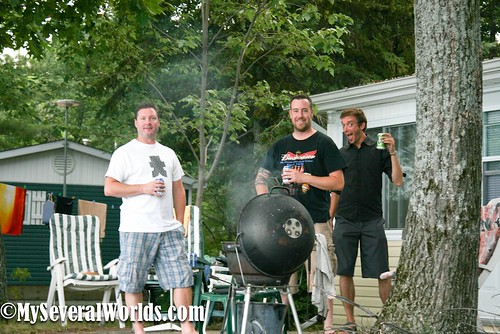 Marshall Cottage, with its sunny yellow frame and white trim, has been our second home for as long as I can remember. As cramped as it is for a family of five, it was an easy life of swimming, fishing, reading, sunbathing, canoeing and bbq-ing. We’d have visitors throughout the summer. Aunts, uncles, cousins, and grandparents all made the journey north; close family friends like the Dales and the Grahams would come with their own children, and as we grew up, we started bringing our friends.

Those hot, golden days passed long and slow, and we moved in and out of each summer day with a familiar fluidity that isn’t hard to recapture 20 years later. 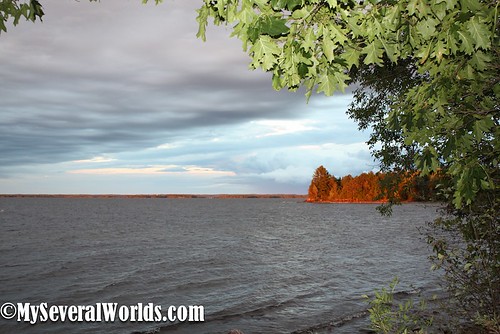 Here is the road where we’d hunt for frogs and tadpoles with our fishing nets and brightly colored plastic pails.

Here is the ‘treat’ store where we bought perfect combination of candy to satisfy us through the afternoon and evening: jawbreakers, strawberry marshmallows, gummy berries, Fun Dip, whippets, and chewy caramels.

Those ladies hated to see us coming!

Here is the field of ice shanties that we used to play hide and seek in,

and here is the camp that we snuck into every whenever we went on an adventure to the Point. 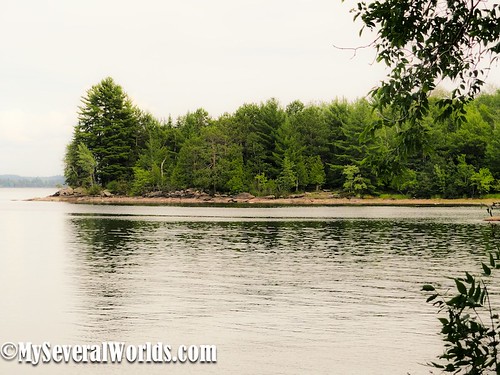 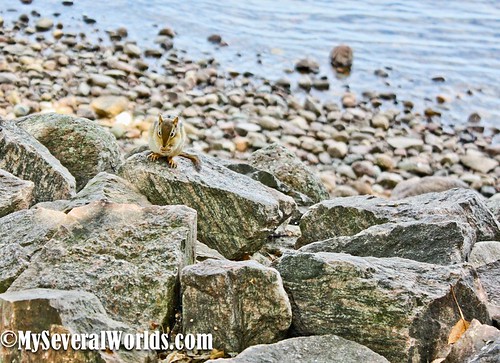 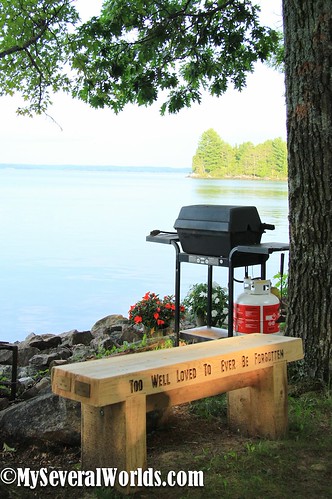 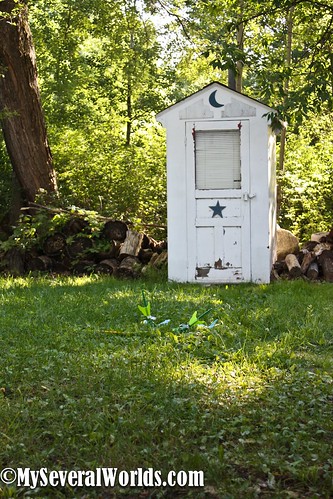 As the years have gone by, my siblings and I moved through a love/hate relationship with our cottage, especially when we were in high school and two months with our parents at the cottage was just about the last place we wanted to be, but that time passed quickly.

Nowadays, our family get-togethers are different. But they aren’t any less fun than those days we had growing up in North Bay. We spend more time sitting and basking in the sun in the backyard or on the beach, content to be with one another. Canadians are known for loving their cottages, and this writer is no exception. If you’ve spent any time on a lake looking out over the placid surface of its water, you’ll understand how nothing beats life on the lake. 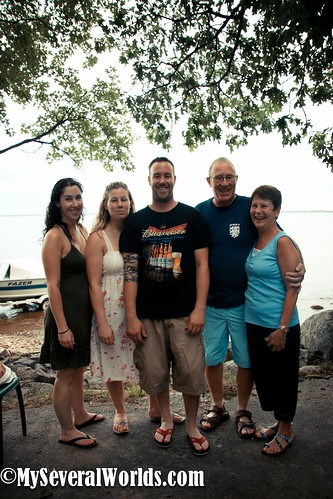