Jiufen – A Step into Taiwan’s Past

I have heard a lot about Jiufen in Northern Taiwan. It was once a prosperous mining town that experienced a tourism boom in 1989, when Ang Li, the Taiwanese film-maker (think Brokeback Mountain), made a film called City of Sadness there. Since then, everything I’ve read about Jiufen has said it’s a must-see attraction in Taiwan. I have been hankering to take a look since I arrived in Taiwan. 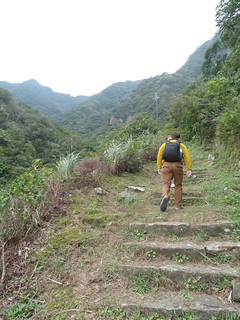 I decided not to take the easy way to Jiufen. Instead I opted for hiking over a small mountain and entering the town from behind. Early one Saturday morning, my friends and I took the 8:25 train and, after an hour or so, got off the train in Houtong. Like Jiufen, Houtong is an a
bandoned mining town, which, according to locals, was taken over by cats after the coal veins dried up and the miners went elsewhere. In recent years, Houtong has branded itself Cat Town in hopes of drawing some tourism to jumpstart the economy there.

After getting off the train at Houtong Station, we crossed the bridge and made a left, walking for about ten minutes along Houtong’s main road before we turned right up a mountain road. The asphalt eventually gave way to a dirt path.

From there, the trail turned sharply up. It was littered with abandoned stone houses, dilapidated by scavengers. As we climbed higher up the mountain, there was a slightly romantic to the mountain path we were following. Pretty pebbles and stones were strewn everywhere, and they seemed to be swallowed up by the green jungle. There was little worth mentioning about the climb, though it was this part of my journey that I loved the most. 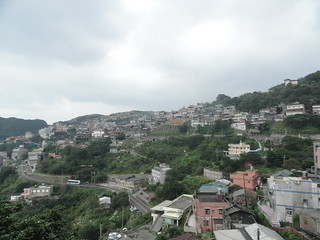 We climbed for an hour or more, winding our way up the steep path. Then, suddenly, the jungle gave way to scraggly, temperate trees; we wound a path through the trees and, on the other side, we realized we had passed over the ridge. From our vantage point, we could see Jiufen languishing below us. The road into the tourist town was saturated with tourist buses.

We climbed down to Jiufen and looked around. I have read that Jiufen has remained popular because of its traditional style of architecture, but, with the crowds it was hard to get a feel for much that was traditional. Plus, the old street was more of a tacky tourist trap, with the same fried food and kitschy trinkets you can find all over Taiwan.

Getting off the beaten path in Jiufen was more rewarding. Away from the crowds, we found a gold museum (80$NTD regular admission). The museum was small and not particularly professional, with exhibits strewn about in glass cases. Still, they had pools in which you could pan for gold along with some several glow-in-the-dark stones that the museum workers were excited to show us. Plus, they had lots of old photos and information on the history of Jiufen. For example, originally, Jiufen got its name in Mandarin, “Nine Portions” because the little village had only nine houses and was so remote that, whenever anyone came up from below, they were supposed to bring back nine portions of some sort of food to share with each house in the village, as this was often the only way that they could get food they had not grown themselves. 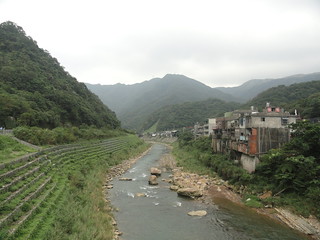 Once we tired of Jiufen, we took off to Jilong Mountain, a tall but easily surmountable peak that lingers above Jiufen. At the summit, you can look down the face of the mountain as it plummets into the sea and up and down the raggedy east coast of Taiwan. The hike is short, only a little more than an hour to go up and down. Definitely worth it, just for the great views from the peak.

As with so many things, the journey, not the destination, was the part of this day trip that I liked the most. I was a little disappointed by Jiufen, but I think that is mostly because of the crowds. If you can avoid the crowds, I would definitely recommend going to this abandoned mining town, especially if you do it by hiking from Houtong. 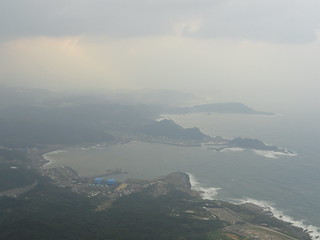 Getting to Houtong is easy. There is an 8:25 train that leaves from Taipei Main Station every morning from platform #4. If that time does not suit you, there are trains leaving throughout the day, but make sure you get a local train that stops in Houtong, otherwise you will go pass right by your destination.

Getting off at Houtong is easy enough. Leave the station, go straight through the small plaza to a little museum and then turn left. Within four or five minutes, you will come to a bridge on your right. Cross the bridge and head into old Houtong village. From there, continue walking for about 10 minutes until you see a small road on your left that looks exactly like this:

Turn right on this road, which quickly becomes a stone-laid path. From here the directions are easy, just keep going up. Follow that path all the way up the mountain and down into Jiufen, which you can see from the top of the ridge.

1 thought on “Jiufen – A Step into Taiwan’s Past”