Today I want to share a story with you about a journey that John and I went on in 2006. Having finished my third year in Northeast China, John and I decided to embark on a three-month backpacking trip around Asia, part of which included a long train journey from Beijing to Xi’an to see the Terracotta Warriors. I was going through old travel photos today, and stumbled upon these gems. I can’t believe I haven’t written about the Terracotta Warriors before now.  I can honestly say in all these years of travel, they still remain one of the most impressive sights I’ve ever laid eyes on. They were also one of the first UNESCO World Heritage sites I’ve visited, so I mean it when I say that this is a place that is close to my heart. There is no explaining the sheer magnitude of this find.

Most of these photos were taken in January 2006, although John recently went back in 2011. I’ve posted some 2011 photos here as well for comparison. The site, although it has always been a huge tourist draw, was nowhere near as big as it is today. The day that we visited the Terracotta Warriors in early January 2006, it was a cold winter day, so we pretty much had the place to ourselves. It was simply incredible. 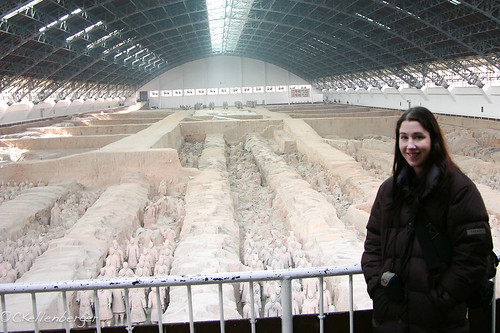 Our first backpacking trip together started in Northeast China in early Janaury 2006. We both look so young…and skinny! Here we are at Pit 1. 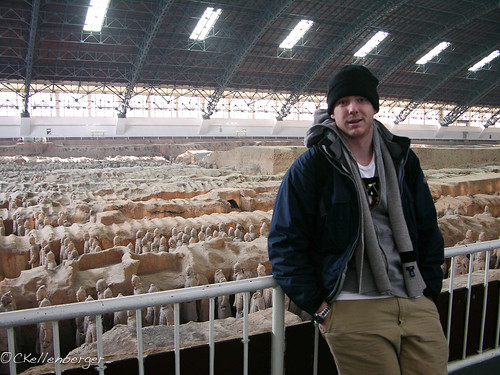 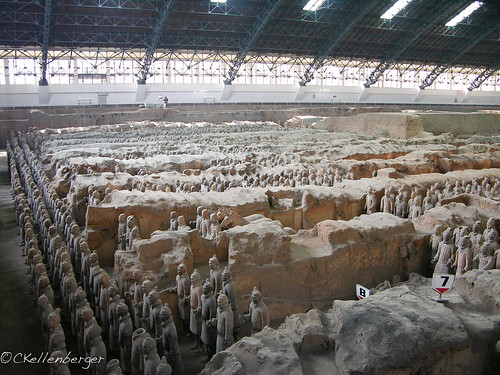 Looking to the far side of the pit, you can see there’s just one person sharing this incredible space with us. This was taken in February 2006. The photo below was taken in 2011. There were lots of people visiting that day. 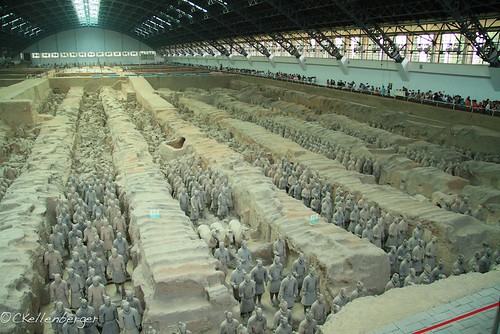 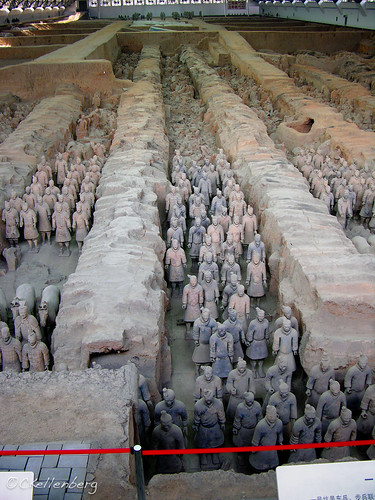 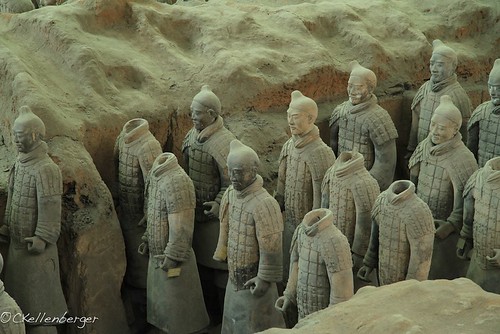 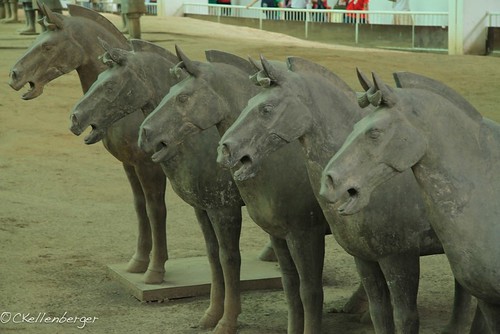 Our journey started off in Xi’an after boarding the local mini bus to the archaeological site. The bus was a rickety old thing. This was a local bus, mind you. Not the main tourist bus that visitors generally take to the site. We were the only foreigners on the bus; and our fellow passengers were mostly Chinese workers, who stared obviously at us while blowing smoke rings out the half cracked windows. Of course, the bus broke down out in the middle of nowhere, and we had to kill an hour waiting for the driver to fix the problem. I remember pulling into a shack that looked like it was falling apart. The driver drove the bus over an ancient concrete mechanic’s pit, and climbed underneath to fix the problem. Within an hour, we were on our way again, and we were pleased to see that no one was there except for a few vendors.

The Terracotta Warriors are undoubtedly one of the biggest archeological finds of the 20th century. The site is located just 1.5 kilometers easy of Emperor Qin Shi Huang‘s Mausoleum, in Lontong, Xi’an in Shaanxi Province. Qin Shi Huang became the Emperor of China in 246 BC  and it took him 11 long years to finish the work on his mausoleum, which is said to contain untold treasures of historical and financial value. He ordered the construction of this massive terracotta army to accompany him into death. The site was uncovered by a group of farmers who uncovered some pottery while digging a new well bear the royal tomb in 1974.

A museum was built on site in 1975, and visitors have been flocking there in droves to see these life size figures of warriors arranged in battle formations. They are exact replicas of what the Imperial Guard wore in those days, and the mere site of them is simply magnificent. The sheer grandeur of this site will just blow your mind, especially when you stop to consider that three pits of warriors cover an area of 16,300 square meters. Altogether, there are over 7,000 soldiers standing on guard with their horses, chariots and weapons of war. It was listed as a UNESCO world heritage site in 1987. 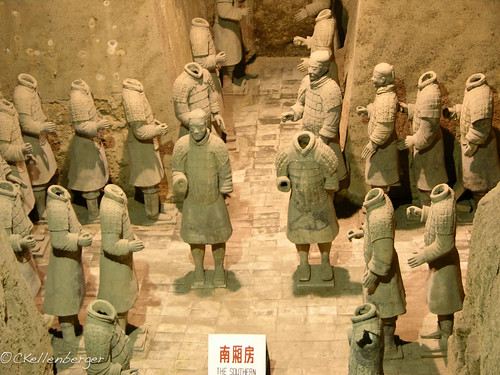 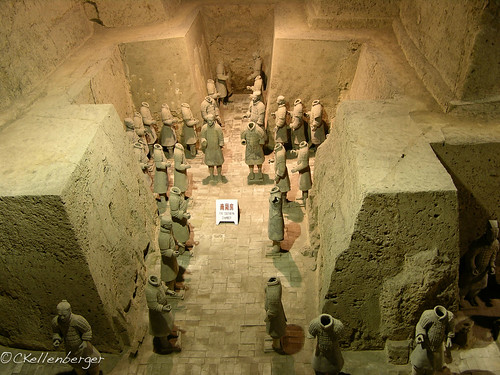 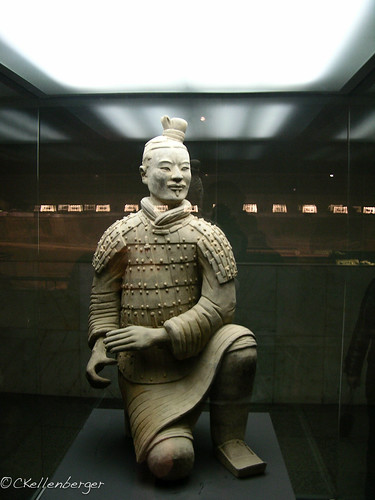 At the end, we spent some money on a few trinkets. It was obvious none of the vendors had made any sales that day, and they looked plain miserable in the bitterly cold wind. John bought me a beautiful Russian white fox fur hat, and we purchased a few warrior statues for gifts for our parents.

We also spent some time wandering around the Emperor’s Tomb. Although there wasn’t much to see, it was pretty neat to stand on that mound and learn about what was beneath our feet.

Looking back now at the beginning of that journey, which turned out to be the beginning of the rest of our lives and the rest of our travels together, it’s so easy for me to see even then that I was lucky to find my best friend and husband during my time in China. We’ve had so many happy, happy journeys together since, and we’re looking forward to many, many more to come! 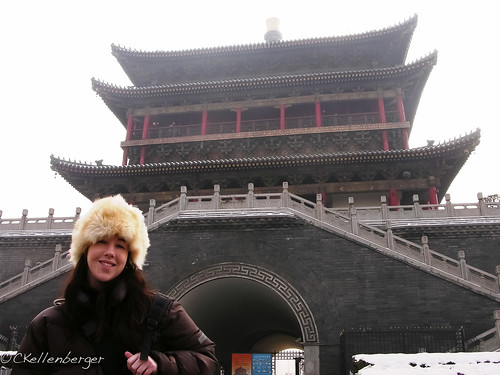 Told you it was a pretty awesome hat!

The Story of Our Wedding in Mexico