You can easily spend a fortune in the Netherland’s gorgeous capital city. The city is loaded with theaters, concert halls, art galleries and museums. Travelers tend to spend their money on Amsterdam’s infamous bars and cannabis coffee shops, but there are plenty of other bargains to be found in this city.

1. Visit the home of Anne Frank

Learn about the tragic history of the Jewish community in Amsterdam at the home of Anne Frank, where a young Jewish girl and her family hid for two yers during World War II at Prinsengracht 263. The home also includes a new wing, which features an exhibition about the persecution of Jews during the War.

Amsterdam is home to a world-class museum that has just been lavishly restored. Rijksmuseum houses the country’s largest collection of art and artifacts from the 15th century through to present day. Rembrandt’s The Night Watch and Vermeer’s Kitchen Maid are both displayed here in the opulent Gallery of Honour.

Mingle with the world’s greatest modern painters at Stedelijk Museum. The bathtub-shaped museum boasts an amazing collection of 20th and 21st century artists, including pre-war works by Picasso, Matisse and Chagall, and Cézanne.

The Van Gogh Museum holds over 200 paintings and 500 drawings, as well as Japanese paintings by his friend and one-time collaborator Gauguin.

3. Embark on a walking tour with Sandeman’s New Amsterdam Tours

What better way to see the city than on foot and for next-to-nothing? New Amsterdam Walking Tours are one of the most economical bargains in town, and there’s no better way to get up, close and personal with Amsterdam. Your three-hour tour includes the Red Light District, Anne Frank House, the Royal Palace and more. Guides work on a tip-only basis. Tours depart at 11:15am and 1:15pm from the National Monument at Dam Square.

READ:  Travel Georgia: The Road to Kazbegi - A Journey through the Caucasus Mountains

One of Amsterdam’s most popular neighborhoods, Jordaan is not to be the area is now home to many students, young professionals and artists. Lively both day and night, Jordaan offers a great variety of trendy cafés, restaurants, shops and galleries.

9 Streets, also known as De Negen Straatjes, the nine little streets angling off from Amsterdam’s grand canals are widely regarded by locals as the Soho of Amsterdam. This charming little neighborhood is known for its specialist shops, where you can purchase anything from dolls and clothing to souvenirs and specialty cheeses for fairly reasonable prices. 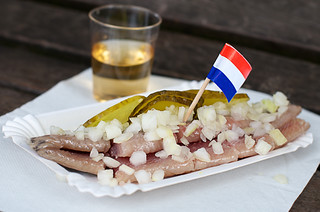 For next to nothing, you can sample Amsterdam’s most famous local snack, raw herring. The best time to try herring is between May and July when new catches hit the stands. This is because you won’t require extra garnishes like onions and pickles because the fish tastes fresh and sweet. There are stalls all over town, but the best stalls are on Singel Haarlingersluis near Centraal Station.

5 Free Things To Do in Amsterdam

Exploring Amsterdam’s canal system is like walking around in a living museum. You might be surprised to know that Amsterdam has more canals flowing through the city than Venice. Amsterdam’s 400-year-old canals are listed as a UNESCO World Heritage site. 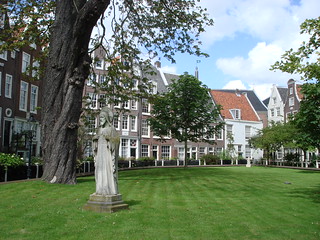 This secret medieval courtyard’s main entrance is just off Gedempte Begijnensloot. Look for a plain wooden door amongst the hustle and bustle of Amsterdam’s busy city center, push it open and enter into an oasis of 14th century homes and gardens. Begijnhof is often described as a secret garden, and it was established as a convent in the 14th century. #34 is one of the oldest houses in Amsterdam. It’s also one of only two wooden houses remaining in the city. Only young women have been allowed to live in this home since its construction.

Amsterdam is home to a number of fantastic markets. The Bloemenmarkt, for example, is the world’s only floating flower market, and it has been snuggled in a city southern canal belt since 1862. Visitors can walk along the canal and enjoy the sights and sounds of this bustling Amsterdam market. Located at Singel, between Muntplein & Koningsplein, the market is comprised of 15 florists and garden shops that are set on houseboats. 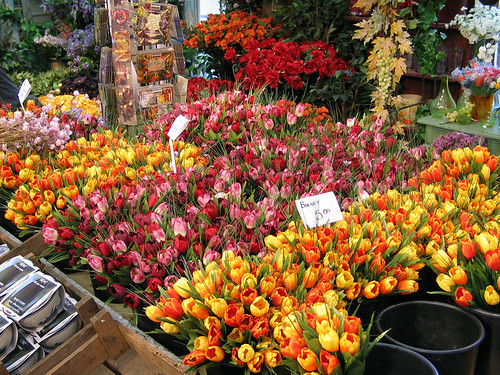 4.  Take in a free lunchtime concert

Take in a free 30-minute rehearsal concert at The Concertgebouw, Amsterdam’s famous classical music hall. During the city’s cultural arts season from September until June, you can spend your lunchtime sampling local music and culture as the musicians of Concertgebouw put on a free 30-minute public rehearsal for their official shows in the evening.

Performers from the opera and Dutch Philharmonic stage free lunchtime concerts at the Muziektheater once a week on Tuesdays from 12:30-1 p.m.

5. Take a free ferry to NDSM-werf

Set sail for NDSM-werd on a free ferry from Centraal Station and explore a derelict shipyard that has transformed itself into an avant-garde arts community. Abandoned boats and trams have been left along the water’s edge, while a giant wooden tiki head watches over the more than 100 studios and theaters that are in area. Here you’ll find recycled-junk sculptures and graffiti artists roaming the streets. NDSM-werf has become a center for underground culture and events.

NDSM-werd: 11am to late
The free ferry leaves from Platform 1 behind Centraal Station from 9am to midnight. The journey takes approximately 15 minutes.

France: Food and Drink - Long associated with Michelin Stars, high quality local ingredients and some of the best red wines in the world,...