Travel Spain: Getting Off the Beaten Track in Barcelona

The haunting of history is ever present in Barcelona. I see cities as organisms, as living creatures. To me, Madrid is a man and Barcelona is a woman. And it’s a woman who’s extremely vain.- Carlos Ruiz Zafron Click To Tweet

The city of Barcelona wears many faces. It is contemporary with its ever-present streaks of urban history; it’s Gothic and mysterious, it’s a city for thrill seekers; and it’s also a green city that prides itself on its many culinary delights.

From unique neighborhoods, villages and one-of-kind restaurants to hidden gardens and the best view of the city, there is no shortage of things to do when you’re on vacation in Barcelona.

Flights from the UK and other destinations in Europe are relatively inexpensive, making this city the perfect option for a long weekend away.

Once you’ve finished scratching below the surface of its main attractions, why not try ticking off some of these unusual activities for a truly unique Spanish vacation? 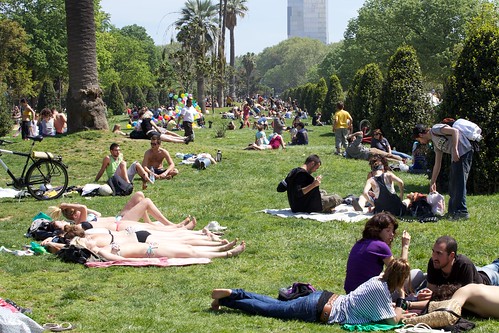 Barcelona isn’t known as a green city, but you might be surprised to learn that the city is packed with botanical, urban and sculptural points of interest.

Barcelona’s public parks and gardens provide shady, wooded areas that offer respite from the hot Spanish sun. There are lots of green spaces where you can sit and sunbathe, or enjoy cooling off next to a lake or fountain.

To one side of the city, the Parc de Collserola is a protected natural site that covers 8,000-hectares. It also holds the honor of being the largest metropolitan park in the world!

On the other side of the city, you’ll find Parc de Montjuïc, a hilly area that offers a treasure trove of gardens, including Barcelona’s Botanical Gardens. If you’re looking for a classical Spanish historical garden, try Parc de la Cuitadella or Parc del Laberint. The Gaudi district houses Park Güell where you can view Gaudí’s imprint.

READ:  Travel Georgia: The Road to Kazbegi - A Journey through the Caucasus Mountains 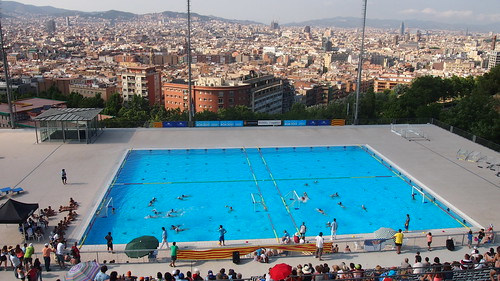 Barcelona is home to the world’s best swimming pool, and it comes with stunning panoramic views of the city.

Sitting high on Montjuïc hill, Piscini Municipal de Montjuïc is open to the public from 11am through 6:30pm throughout summer. The pool was originally built in 1929, but it wasn’t until the 1992 Summer Olympics that it came under the international spotlight.

Since then it has hosted numerous world diving events, it offers a relaxed chill out area for folks looking to escape the Spanish sun; it was even the backdrop for a Kylie Minogue video. 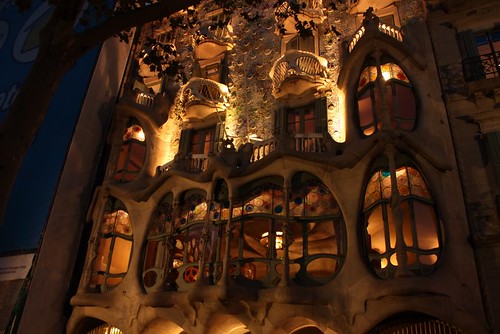 It’s impossible to mention Barcelona without mentioning Gaudi, so here is my tribute to him.

Casa Batlló is a remodel of a home that was built in 1877. It was redesigned in 1904 with intricate facades and imaginative floors, which include irregular oval windows, sculpted stonework and delightful nooks and crannies. The entire building looks as though it doesn’t hold a single straight line.

Perhaps this is one of the reasons why it’s known as the House of Bones. An evening at one of the most iconic buildings to be found in Barcelona promises a veritable feast of sound and light.

Plus, what could be spookier than visiting a House of Bones under the eerie light of the moon? 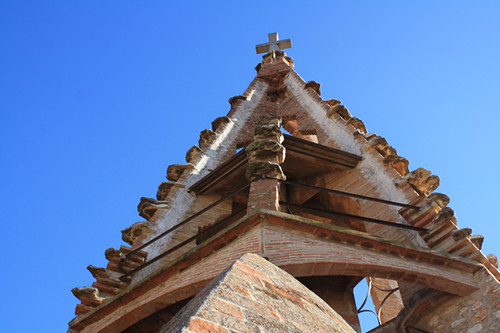 Gaudi often collaborated with Jujol on his building designs. Gaudi was known to be deeply religious and extremely austere, so it was often left to Jujol to bring some fun to some of Gaudi’s most famous works. It was Jujol, for example, who made the broken tile mosaics that can be found in Park Güell.

READ:  In Travel: Parks A Plenty

Josep’s creations can be sound in surrounding villages outside of Barcelona. Villagers and landowners often turned to Jujol to build them churches on a budget.

The village of Vistabella, for example, boasts a church spire that rises high above the tiny homes in this area. The church itself looks like a piece of La Sagrada Familia, with irregularly shaped windows of all sizes studding the walls of the structure.

In a city that prides itself on being a gastronomic center, no visit to Barcelona is complete without sampling some of Barcelona’s better-known tapas bars. Bueno, barato, and bonito (good, cheap and attractive) is practically a mantra in Barcelona, where people look for good quality food that represents value for money.

Many bars and restaurants offer free tapas to lure customers in. The Eixample, Gracia, and Poble Sec districts all house kitschy places that offer different homemade tapas and a beer for as little as €1.50.

Every Thursday night, visitors travel the Poble Sec Tapas Route (seriebcn.net) to sample the specialties of 20 bars in the area.

If it’s a unique dining experience that you’re after, make your reservation months in advance at Tickets, Ferran and Albert Adrià’s Barcelona tapas bar.

Ferran Adria, the chef of El Bulli, is one of the best tapas chefs in the world, so it’s no wonder that Tickets offers some of the best avant-garde cuisine in Europe.

Each dish that is served comes with an explanation of its origins, the ingredients, the style of cooking and how it should be eaten. The Mini Airbags stuffed with Manchego cheese are an explosion of flavor in your mouth, while the Avacado Galician crab cannelloni resembles a giant green caterpillar.

Dining at Tickets is a magical experience that will make you laugh with delight at every mouthful. Bookings at Tickets(Avinguda del Paral-lel 164, ) must be made online.

Barcelona is an endless source of possibilities with plenty of experiences that go beyond the ordinary, and these are the kind of adventures that stay with you long after your Spanish holidayhas ended.

Over the years, Ibiza has earned a reputation as the clubbing capital of the world. During the busy summer months, the very best of...

2 thoughts on “Travel Spain: Getting Off the Beaten Track in Barcelona”