10 Things to Do in Brighton, England

Brighton is a resort city located on the south coast of Great Britain. It’s directly south of the capital city of London, which is less than an hour’s drive away. It emerged as a health resort area for bathing in the sea during the 18th century. Since then Brighton, often referred to as London-by-the-Sea, has continued to attract day-trippers, who come to experience life by the sea and Brighton’s fantastic musical and arts scene.Today, Brighton is home to 480,000 inhabitants. It is well known for its large gay community, Bohemian atmosphere and oriental architecture.

Here are my top 10 (mostly free) things to do in Brighton, England: 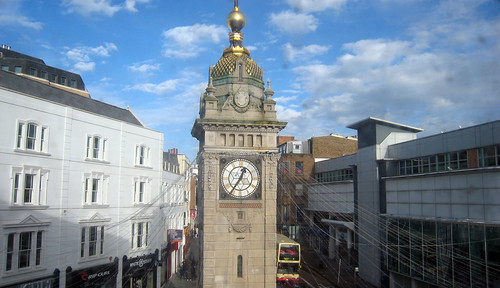 The Brighton Clock Tower was built in 1888 for Queen Victoria’s jubilee. It’s arguably the best place to begin your exploring, as folks in Brighton often tend to give directions related to prominent landmarks.

The Brighton Clock Tower stands at the intersection of Queen’s Road and West Street. Western Road, a major shopping area, runs to the west. North Street runs east. You’ll find a number of Brighton attractions within walking distance of the Clock Tower, including The Lanes, which are located half-way down North Street. The Royal Pavilion gardens are located at the eastern end of North Street. 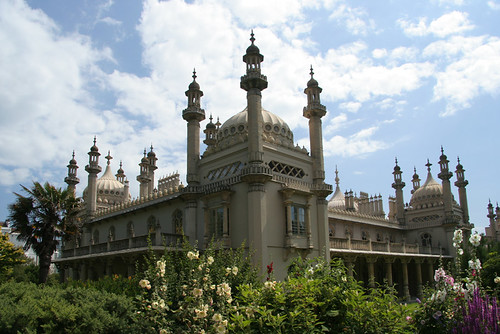 A large factor in Brighton’s growth happened early in the 19th century when the Prince of Wales built the Royal Pavilion. This beautiful structure was home to the Prince Regent during the early 19th century. It’s famous for its Indo-Saracenic architecture and Oriental interior. The pavilion was sold to the City of Brighton in 1850 for £53,000.

The Sassoon Mausoleum is another structure in Brighton that boasts Indo-Saracenic architecture. This is the former grave of Sir Albert Sassoon and members of his family. The mausoleum was built in 1892 as a wing of the family home located at 1 Eastern Terrace.

The house is no longer there, and the remains of the Sassoon family members were reburied in the Willesden Jewish Cemetery in London. Later, the mausoleum was used as a furniture depository, an air raid shelter, and a Brighton Arms pub. It underwent a £60,000 refurbishment in 2006. Today it’s a contemporary supper club that is meant to evoke the supper clubs of the 1920s and 30s. 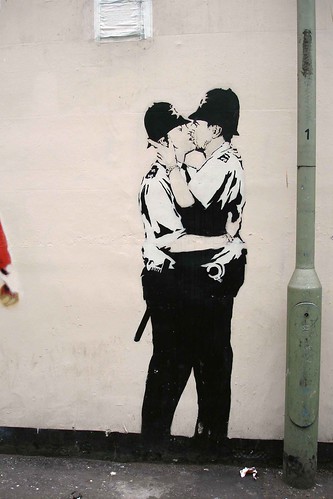 Sadly one of Banksy’s most controversial pieces of street are was removed from the walls of a pub under the railway station in Brighton shortly after I visited Brighton. I was lucky enough to view Banksy’s original stencil of The Kissing Coppers just before it was removed.

Never fear, though. There are plenty of other artistic delights to be found on the streets of Brighton. The walls of the buildings on Kensington Street are adorned in paintings of stories, celebrities, and other scenes from pop culture. 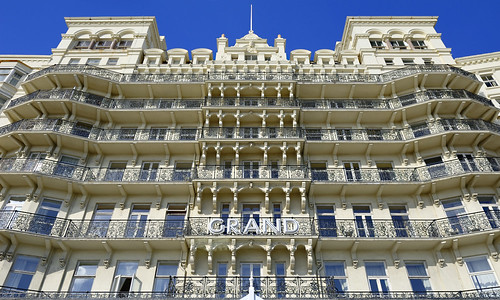 The Grand Hotel, Brighton’s only five-star hotel, is a stunning building located on Brighton’s seafront. It was originally constructed in 1864; it was used to entertain the most eminent Edwardians and Victorians. A terrorist attack massively damaged the building in 1984. Today, it’s the most elegant Georgian re-creation in town.

No trip to Brighton is complete without the cosmopolitan vibe of Brighton Pier and Brighton Beach. The Pier boasts a fun-fair, arcade halls and numerous restaurant. Brighton’s famous shingle beach is littered with pebbles and cobbles.

It’s famous for its seafront bars, restaurants, nightclubs, amusement arcades and sports facilities. During the months of summer, Brighton Beach is generally covered with tourists and locals. There is a designated nudist beach to the east of Brighton by Kempton.

Brighton’s Marina is one of the largest in Europe. There is a surfing area located a bit further from the marina. 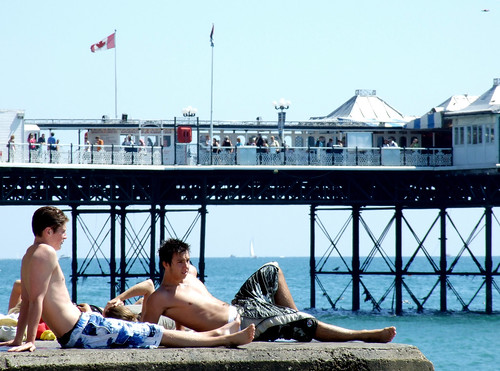 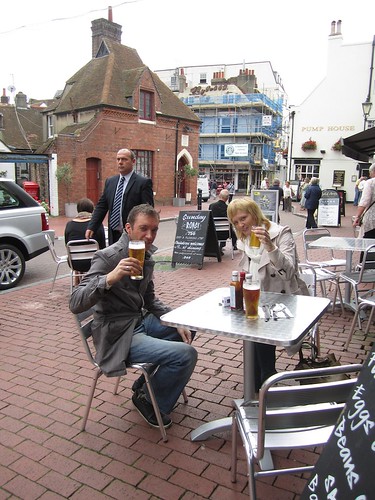 Brighton is home to over 300 pubs and over 400 restaurants. There’s no shortage of great places to eat at in the city. While out driving, we stopped at the Munchmobile. The owner, Jacqui Bardsley, serves up brainpower smoothies, tasty artisan sandwiches, baked potatoes, bagels, wraps, and fresh Italian coffee in an eco friendly mini food van at Falmer Station opposite the new American Express Community Stadium. 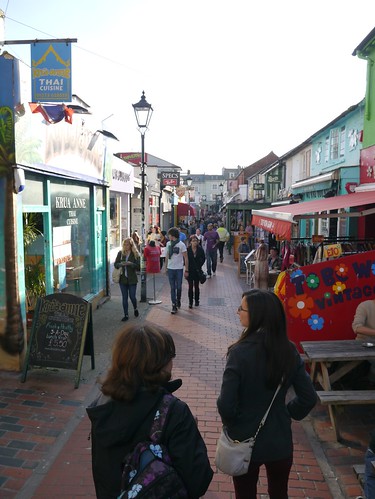 This is a small area of independent shops near the seafront in Brighton. The area is characterized by its narrow laneways that follow the street pattern of the original fishing village it’s based on. Shoppers will find mostly clothing stores, jewelry, and antiques in the area. There are a few antique weapons shops here as well. The Lanes also has a healthy selection of cafes, bars, and record shops to while your time away at. 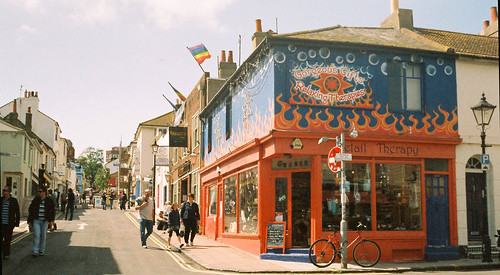 Often incorrectly called the North Lanes, the North Laine offers a Bohemian atmosphere in a world of punk rockers, goths, and hippies. News shops, artisan shops and bong stores can all be found here You’re sure to find something special to mark the occasion in The North Laine’s numerous cafes, market stalls, second hand clothing stores and avant-garde shops. 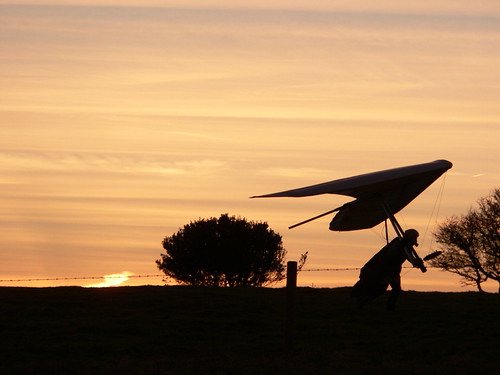 The Devil’s Dyke is a deep V-shaped valley on the South Downs Way in southern England. It has been a major local tourist attraction since the late 19th century. Devil’s Dyke was used as a defensive area before and after the Iron Age. In late Victorian times, the area boasted a fairground, two bandstands, an observatory and a camera obscura. During its heyday, Devil’s Dyke was a huge hit with Victorians, who visited the area upon the thousands. Today it’s a tranquil place to retreat to. It also offers a variety of recreational activities from paragliding to zorbing.

Well, there you have it.

Whatever your reason for visiting, your experience in Brighton is guaranteed to be bright, colorful and fun in this pretty seaside resort city on England’s southern coast. 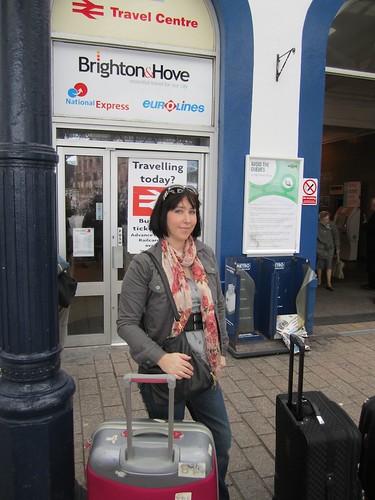 The author in Brighton in September 2011.

9 thoughts on “10 Things to Do in Brighton, England”