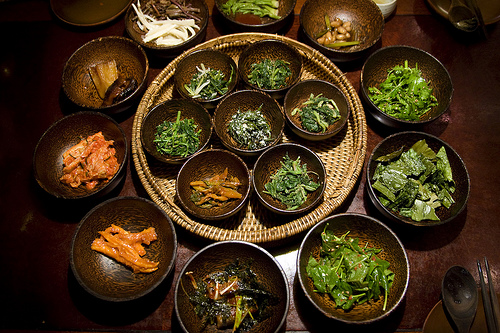 John and I are here in Seoul for a board presentation with the Korean government, and while we usually try to make the best of the time here, it’s always tough for us to uncover hidden gems within the city when we’re only in town for 24 to 36 hours at a time. We’ve been lucky enough to uncover some real treats over the past two years that we’ve been doing this, but this trip has been an extra special one, not only because we are here on business in a different capacity, but because we managed to cram all of our business into one VERY full day, leaving ourselves enough time to get out and explore the city in more detail before heading home to Taipei at the end of the weekend.

Last night we met up with a business associate who had lived and worked in Seoul for over five years. When we talked about having dinner with him, we thought we would be having the standard Korean bbq meal, a must-try experience for anyone visiting South Korea (If you’re a meat lover, that is.), and one that we generally greatly enjoy. 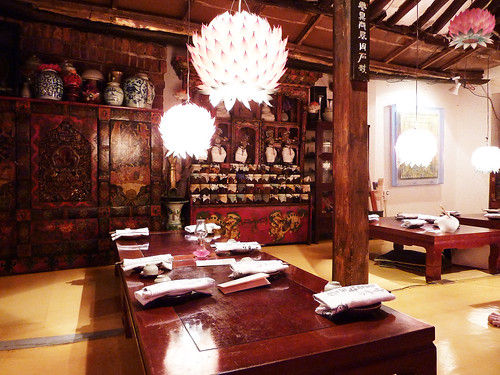 The lotus lanterns are handmade by monks. Gorgeous, aren’t they?

He, on the other hand, had different plans for us. Upon meeting up with him in Insadong, the cultural heartbeat of Seoul, he asked us if we thought we’d enjoy some vegetarian temple cuisine. Neither John nor I knew what he was talking about, and we were both eager to try something different. He proceeded to lead us through a winding back alleyway, gesturing at a few things along the way. As we pass a traditional teahouse, the windows adorned with a soft white glow of paper lanterns, “This is the real city of Seoul that you’re were seeing now,” he says as he leads us up to traditional looking home. Once inside, the noises of the city drift away. We take our shoes off at the door and tuck them away in shoe cubbyholes before proceeding deep into the heart of the restaurant. Its looks are deceiving from the outside, and we are surprised at how spacious it is inside. The restaurant is decked out with beautiful wooden floors, handmade paper lotus lanterns, and gleaming wooden tables. We’re led to the very back of the restaurant and seated at a low slung table with floor cushions. To our right is a wide open space for performances, and we know we’re going to be in for a special treat this evening.

We’ve just arrived at one of the most famous vegetarian restaurants in Seoul. Sanchon, which translates to mountain village, specializes in serving its patrons with traditional vegan food that is served at Buddhist temples. The restaurant, which was opened in 1981, belongs to a former Buddhist monk by the name of Kim Yon Shik, a restaurateur who has also written three cookbooks on vegetarian cuisine. This restaurant is so famous that it’s even been written up in the New York Times, a fact that is conveniently laid out for guests on the back of the restaurant’s menu. For anyone who has been to South Korea, you’ll probably understand why this is important. Vegetarians can have a hard time finding food in South Korea. Everything is served with meat. 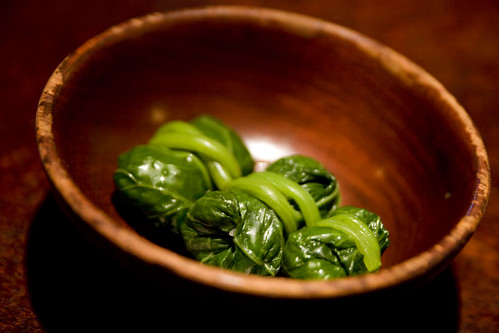 Our meal gets underway and the servers start bringing us wooden bowls filled with vegetable delights. By the time everything arrived, we had 20 dishes on our table. There wasn’t room for anything else. There were a few dishes that I didn’t particularly enjoy, but the bowls of mountain greens seasoned with sesame oil, pan-fried potato pancakes, glazed potatoes, and rice wrapped in fresh leaves were all quite tasty. Most of our meal was served cold, but the tofu stew was quite yummy and just what I wanted for a cold winter evening in March. The meal was full of different tastes and textures, from salty and sweet to slightly bitter.

For anyone who’s interested, here is the full menu:

Throughout our meal, we were treated to a number of traditional dances, performed by three beautiful and talented dancers dressed in various traditional costumes.

I’m a huge fan of dance, and while the meal was delightful, the dancers stole the show for me. I became so entranced with the music and their performances that I found myself forgetting to eat. The women were elaborately made up and used props like drums, fans and sticks to accompany the music being played.

Korean traditional dance originates from ancient shamanistic rituals from thousands of years ago, and you can tell just by listening that this music is used in ritual style dance forms.  One dancer gave a bit of a scary performance. Have a look at the photo below and you’ll see what I mean. The music she danced to offered a primal beat with a lot of screaming and wailing. Some of it was downright haunting and at other times, the music was a bit overwhelming.

All in all, it’s an experience I’ll never forget. I am very sorry to say that I was expecting to go to a bbq restaurant that evening, which we’ve done on many occasions, and I regret that I didn’t bring my camera with me. Luckily, I was able to find some photos available on Flickr through Creative Commons.

Whatever your reason for going, Sanchon is one restaurant that you should definitely visit while you’re in Seoul, if not for the food, then certainly for the atmosphere and for a glimpse of Korea’s beautiful past. 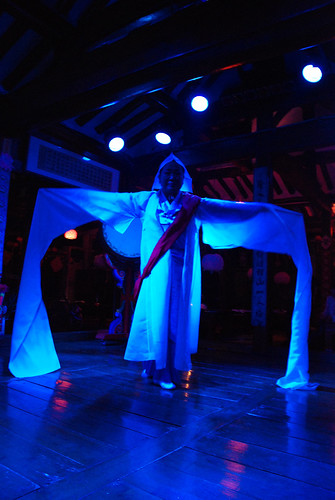