The Stunning Temples and Pagodas of Lotus Pond in Kaohsiung, Southern Taiwan

If you’re a temple lover and you’re in Taiwan, one of the best (and craziest!) places to visit is Lotus Pond in Kaohsiung. This area is also known as Lotus Lake. It’s certainly one of my favorite places to visit in Southern Taiwan. John and I always stop off for a stroll whenever we’re in the city.

The pond is located in the north end of the city, and it’s one of the largest manmade bodies of water I’ve ever seen. Lotus Pond gets its name from the layers of lotus blossoms that cover the water. It’s one of Kaoshiung’s most popular tourist destinations because it’s home to one of the most frequently visited temples in Taiwan (Ciji Temple), it has the largest Confucius Temple in Taiwan, and its shoreline is liberally studded with many bizarre looking pagodas and temples. The area sits between Turtle Mountain and Half Screen Mountain, and it includes a number of attractions, as featured below.

There is a path that leads around the lake, but be aware that you’ll need most of the day to walk the entire distance. If you’ve only got an hour or two, I’d recommend starting at the southernmost part of the lake. 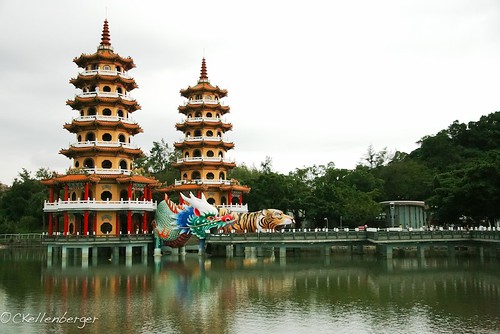 Here, you can see the stairs leading up into the dragon’s belly. Kuanyin, the Goddess of Mercy, is the figure in white on the dragon’s back.

The Dragon and Tiger Pagodas are impossible to miss. These colorful temples were built in the 1960s, and they act as an extension of  Ciji Temple on the opposite side of the street. Make sure you enter the dragon’s mouth and exit the tiger’s mouth for good luck. Once you’re inside the dragon’s belly, stop to have a look at some of the garish paintings, which depict scenes from heaven and hell. These paintings are meant to encourage visitors to do good deeds. 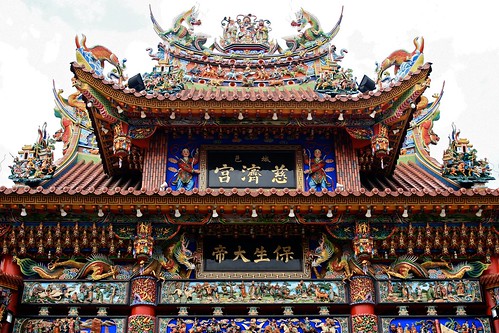 Cijin Temple is now one of the most visited temples in Kaohsiung’s Zuoying district.

The Spring and Autumn Pavilions extend out onto the lake. These temples are dedicated to Kuan Kung, the God of War and Kuanyin the Goddess of Mercy. In between these pavilions, you’ll see Wuli Pavilion, which is marked with a long walkway and dozens of brightly colored yellow lanterns. 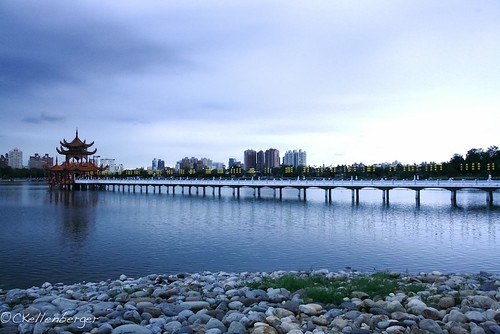 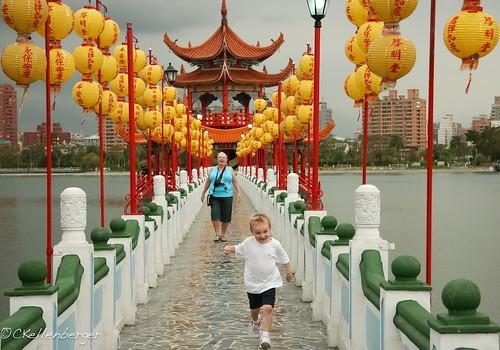 This is a great place to bring kids, by the way. Our little guy let off tons of steam while running up and down the pathways to the temples. He was fast asleep in the car by the time the sun had set.

The largest temple in the area is located just across the road. It’s called the Temple of Enlightenment and it’s worth visiting just to see the two giant guardian Fu dogs which are draped over stone balls. Fu dogs are often seen at the entrances of temples and family homes. They always come in pairs, and there is usually a a male and a female fu dog. You can tell them apart by looking at their feet. The male generally has its paw on a ball or globe, while the female can be spotted with a cub at her feet. 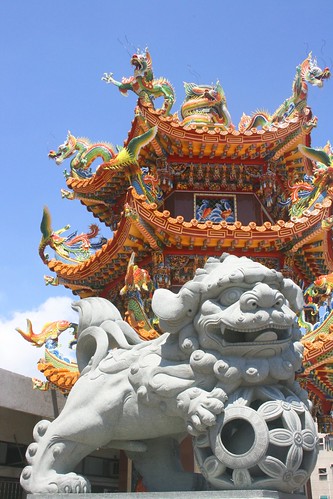 Here’s an example of a male Fu dog at a temple in Penghu. 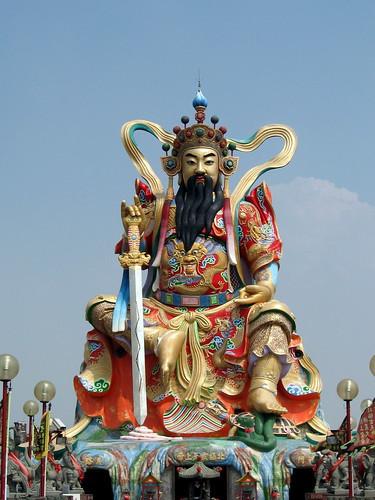 Don’t miss a visit to the 24m statue of The Supreme Emperor of the Dark Heaven and guardian of the north. His name is Xuantian Shang-di.

The final temple of note is the Confucius Temple on the lake’s northern end. The temple was constructed in 1976 and it is thought to be the largest Confucious temple in Taiwan.

Although this is a beautiful place to visit by day, it’s equally fascinating by night as the colored lights from the temples make for an otherworldly experience. The local government has spent a lot of time building this area up. Whatever your reasons for visiting, Lotus Pond is sure to be one of the most unusual experiences you’ll have in Taiwan. It makes every other temple visit in Taiwan seem boring, and that’s saying something considering Taiwan is FULL of gorgeous temples just begging to be discovered.

To get there: Take bus R35 from KMRT Ecological District station. The lake is a short walk away from Zuoying HSR/MRT Station R16.

9 thoughts on “The Stunning Temples and Pagodas of Lotus Pond in Kaohsiung, Southern Taiwan”