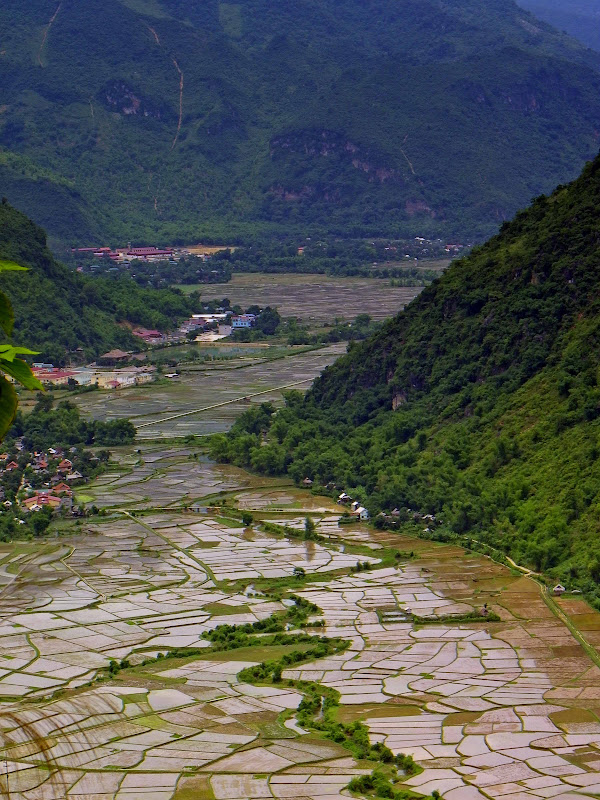 From the top of the hill, Mai Chao looks like the Vietnam I’ve always imagined: rice paddies and small huts, nestled in a valley in the midst of sharp mountains.

After a chaotic week in Hanoi, I was craving a trip to rural Vietnam. Too short on time to make the popular trip to Sapa, I had followed a friend’s recommendation and booked a tour to the nearby village of Mai Chao through one of Hanoi’s many travel agencies.  About a four-hour car ride from Hanoi, this village is home to a Thai minority living in Vietnam, and is a fairly popular 1-day or overnight trip.

From our view-point up on the hills, it’s only a short ride down into the valley. Soon, the van is rumbling precariously along the narrow paths between rice paddies, the murky brown water just a couple of feet away on either side.

We aren’t taken to a tour agency, or a restaurant. We are instead driven right to our guide’s home. His wife greets us with a delicious home-cooked Thai meal. Their kids and a few other guests are lounging around, while off to the side, a couple of turkeys mill around. Like a few other villagers, they have converted their home into a home-stay, where tourists from Hanoi can spend a night or two sleeping on the wooden floors of the traditional Thai hut.

I won’t have a chance to sleep here, unfortunately. My trip to Mai Chao is a whirlwind daytrip, just enough to get a taste of a side of Vietnamese life so different from the hustle and bustle of the city.

Only a short while after finishing lunch, we’re climbing onto rusty old bicycles. Our cycling guide, a local woman, leads the way.   Around us, the muddy water of the rice paddies stands still in the hot afternoon air.

We come to a stop in front of her hut, take off our shoes, and then walk up the narrow wooden steps.

The hut is a single, large, low-ceilinged room. All around the walls are photos, postcards, letters, and dozens of tapestries. All of the textiles are hand-made, she tells us. Like many of the women in Mai Chao, she weaves textiles mostly to sell as souvenirs. Some of the tapestries are 3 or 4 meters long, and when we ask her how long it will take her to make those, she tells us it will take a week to weave 1 or 2 meters. 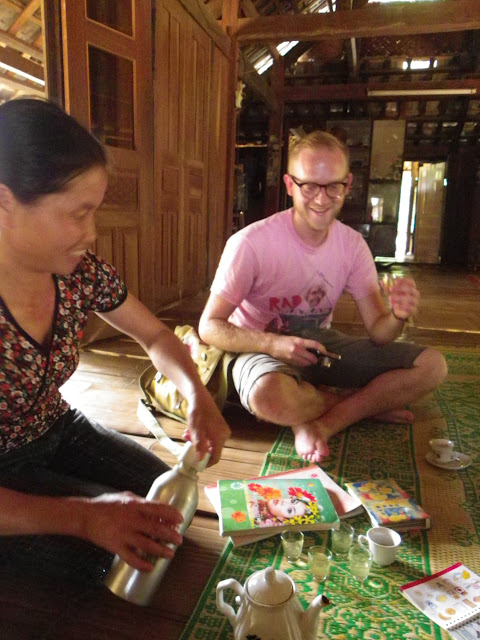 Sitting on the wooden floor, our guide serves us tea, and proudly shows off book after book of signatures and messages in dozens of languages. When I tell her I’m from Pittsburgh, she excitedly goes digging through one of her books, and pulls out an envelope filled with postcards. She shuffles through them and hands me a few–from Pittsburgh, Philadelphia, and a few other paces on the East Coast. This smiling woman sharing tea with us has, over her years guiding tourists through her village, accumulated hundreds of friends around the world.

A small thermos and a few cups are the next things to come out. “Rice wine,” she tells us. “I make.”

As we drink and talk, the sky grows threateningly dark, and the wind starts to blow ominously. People nearby are taking their laundry off of the clotheslines, and moving chairs inside.“We go back, quickly,” she tells us, gesturing towards the cycles outside. “Shortcut.” 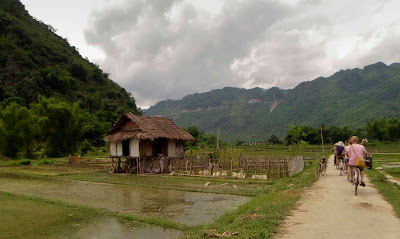 Soon, dirt is blowing up under our tires and whipping around us in little tornados. The rice paddies are rippling, and the jagged mountains in the background are slashed and cut with bursts of lightning. I pump the pedals of the squeaky old bike as hard as I can, chasing after our guide and her conical Vietnamese hat.

We race the storm back to shelter, knowing that it doesn’t matter one bit if we make it or if we end up drenched. For a few moments, I feel like a kid again, like I’m racing my brother through the woods and bike trails of Pennsylvania. At the same time, I feel like I’m on one of those adventures of a lifetime that I never quite believed I’d have. I feel more exhilarated and alive than I have in a long time.

We reach the hut just as the clouds are breaking. A few raindrops start falling as we put the bikes away and duck under the roof. Within a few minutes, it’s like curtains of water have surrounded the building.

And now, in the midst of this storm, it’s nearly time for us to leave the peacefulness of Mao Chao behind.

After a few hasty goodbyes, we duck our heads and bolt through the rain into the jeep, which just barely manages to chug and smoke its way out of the valley and back to Hanoi.

This guest post was written by Stephanie Long. After the constant noise and crowds of Hanoi, Bat Trang feels like a ghost town. White-hot...

Dreams really are made of...