The Kota Kinabalu City Mosque should be on your list of things to do in Kota Kinabalu, Sabah. Day or night, the mosque is a stunning combination of Islamic modern architecture and landscaping with aspects that have been compared to Nabwai Mosque in India.

The mosque opened on February 2, 2000 after Kota Kinabalu received city status. The man-made lagoon that embraces the mosque offers an optical illusion for anyone looking at it from afar. From a distance, the mosque looks like it’s floating. With a prayer hall that encompasses three madrash, the mosque can accommodate up to 12, 000 devotees at a time. It takes after the Prophet’s Mosque in Medina, which is the final resting place of Mohammad.

The still waters of the lagoon give off near perfect reflections of the mosque both at day and at night, creating an air of beauty and mystique. At night, with its lights illuminating the dark waters of Likas Bay, it’s easy to see why some people believe that it is one of the most beautiful mosques in all of Malaysia. A daytime visit, is no less beautiful, however, as you can see from my photos.

Kota Kinabalu City Mosque is open daily except Fridays from 8am to 5pm. Admission is free.

The mosque is about three kilometers from Kota Kinabalu City just a short distance from the South China Sea. You can catch a taxi there for between 12 and 15 RM. The bus is 1.50 RM and leaves from Wawasan Plaza between the hours of 6:30am and 8pm. 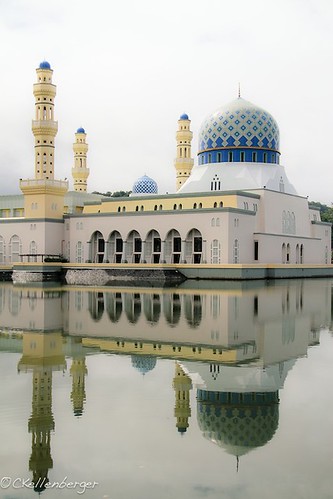 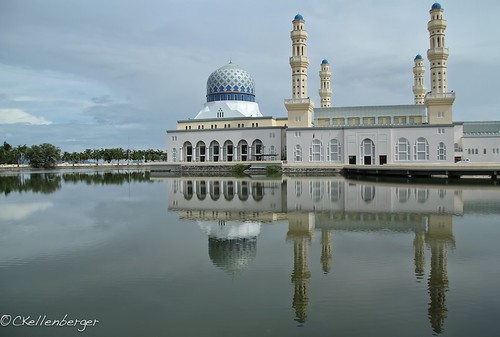