Lunar New Year celebrations are almost upon us here in Taiwan. I’ve commented before on how this holiday is celebrated in Taiwan, so this year I thought I’d comment on celebrations for Lunar New Year in Kota Kinabalu in Malaysia Borneo, which was where we spent the holidays last year.

The Lunar New Year is the most important festival in the Chinese Lunar Calendar, luring thousands of friends and families to participate in games and watch Lion and Dragon dances, martial arts demonstrations and other fun events.

Stay away from those pricey seafood establishments on the promenade and head for this place instead. Glass aquariums line the walls of the complex, while seafood vendors hawk their fresh catches and cook it for you right there. John and I are huge seafood lovers so we were delighted by the variety of dishes available and the cheap prices, especially when we compared it to the seafood restaurant our hotel concierge recommended (which was also excellent, but mighty pricey).

Having picked up a giant assortment of shrimp, fresh sea bass and river prawns, we had just sat down to enjoy our meal when we heard three distinctive tock, tock tock sounds that announce the entrance of a Chinese lion or dragon.

The golden lion represents liveliness, and there seemed to be no shortage of liveliness on display in Kota Kinabalu during the Lunar New Year.

This year the Lunar New Year Carnival in Kota Kinabalu runs from January 17 – 22nd, 2012. Festivities are taking place in Lintasan Deasoka, which will be lit up with rows of traditional Chinese lanterns. Visitors will also enjoy a large variety of food stalls, local handicrafts, and decorations, as well lion dances, drumming shows and other colorful cultural shows such as the Fan Dance. 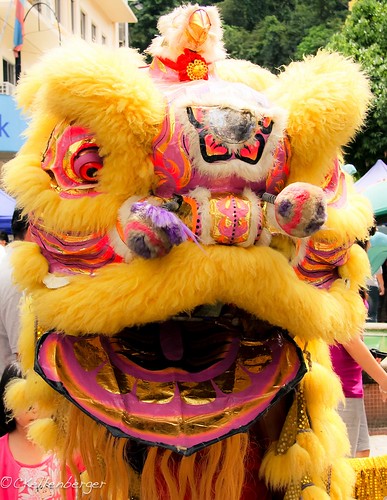