Sit back, breathe a sigh of release, and relax into the steamy heated goodness that nature has to offer in Taiwan’s hot springs.

Taiwan’s location atop two of the earth’s major tectonic plates has blessed the island with mountainous terrain and an active volcano that have given rise to more than 130 natural hot springs scattered all over the island.

Owing to its high concentration and variety of natural springs, Taiwan is ranked as one of the top hot spring destinations in the world. Hot springs, cold springs, mud springs, saltwater springs; springs that vary in color from milky-white, blue, and green to clear and muddy, and springs that vary in mineral content from sulfur to sodium and iron can all be found on this tiny island.

Hot spring locations throughout Taiwan are acclaimed for their healing and restorative benefits, which may offer relief from a number of ailments that include arthritis, chronic dermatitis, muscle soreness, stress, and chronic fatigue.

Speaking as someone is chronically ill, living in Taiwan has its benefits, one of which is its number of healing hot springs.

I especially like these hot springs for their healing qualities in dealing with Ankylosing Spondylitis and Fibromyalgia. There is no better treatment than to soak in these waters to help hurting muscles and arthritic bones.

It’s no wonder that Taiwan has such an ardent and active hot spring culture, and with such a large number of bathhouses and lavish spa resorts, Taiwan is quickly gaining an international reputation for being an ideal Asian destination for relaxing and recharging both the mind and body.

The History of Taiwan Hot Springs

The hotel was not only an instant hit with Japanese soldiers, but it also blazoned the trail for dozens of other hot spring resorts that were soon to come.

The 70s and 80s saw a brief decline in the popularity of spas and resorts, but a large-scale promotional effort sponsored by the government in 1999 renewed interest in Taiwan’s hot spring culture once again. Over the past ten years, hot spring resorts and spas have been constructed all over the island, thereby becoming firmly ensconced in Taiwanese culture.

Today, no trip to Taipei is complete without visiting at least one of its two major hot spring destinations: Beitou Hot Spring Valley and Yangmingshan. Both areas, which claim roughly ten fountainheads between them, are accessible either by car or public transit and can be reached within 30 minutes. 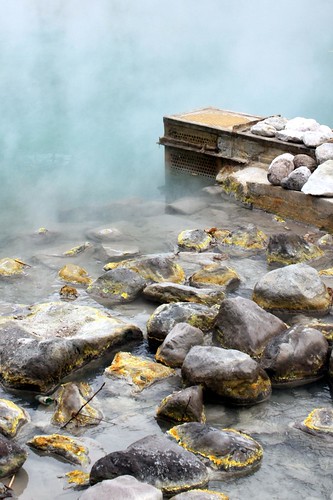 Beitou Hot Springs, Taipei – Learn about the hot spring hotels and options in Beitou, which is accessible by MRT in Taipei.

Wulai Hot Springs, New Taipei – Wulai is one of the most famous hot spring destinations in Taiwan. It’s also a beautiful aboriginal village, so you can soak up some Taiwanese culture while you’re at it!

Yangmingshan Hot Springs, New Taipei – Some of my favorite hot spings are located on Yang Ming Mountain, just a short drive from where I live.

5 Tips for Hot Springing It in Taiwan