The deep ringing sounds of handmade gongs resonate through the air as we enter Kampung Sumangkap Gong Making Factory in Kudat, Sabah in Borneo Malaysia.

This authentic Rungus village is home to one of East Asia’s largest community of gong-makers. The village is comprised of a community of families that have been crafting brass gongs in their modest cottage style homes for years.

Gong making was once a very private form of art that was done deep in the jungle and away from the prying eyes of strangers, but this thriving little community in Sabah is happy to share their expertise in gong making with outsiders who come to watch them perform their ancient craft. About a dozen homes lining a single narrow dirt road feature open-air workshops and storefronts, allowing visitors to stop for a gander as the master craftsmen go about their business. If you’re lucky, someone might even play a tune for you. 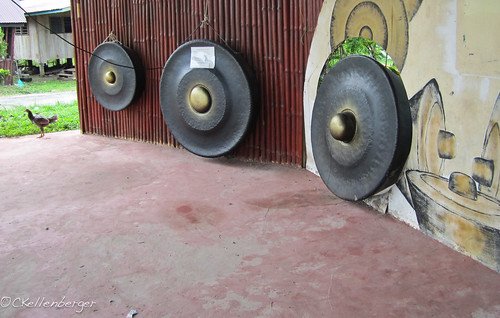 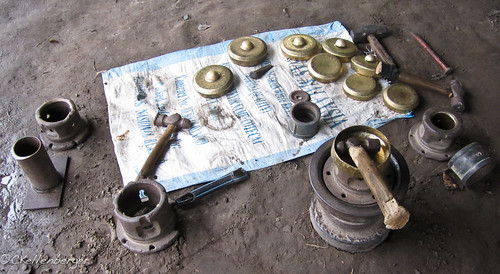 The tools used by a gong maker.

The clanging of hammers against sheets of brass, tin and bronze echoes throughout the village, but the overlying sound of low resonating gongs are predominant here. The villagers often hold cultural performances in the Kampung Sumangkap Community Hall, where a set of different sized gongs that produce different sounds – known as kulintangan – are played to the delight of visitors.

The gong is an important musical instrument used by the Rungus and many other communities in Kudat Malaysia, and they are traditionally played during grand occasions such as weddings and other festivities. Gongs are valued not only as musical instruments, but also as items of wealth.

These beautiful East and South East Asian musical percussion instruments are formed from a flat metal disc of bronze and brass that is hit with a malleta to create the loveliest sounds.

There are two methods of gong-making, both of which are demonstrated in Kampung Sumangkap Gong Village. The first method involves piecing together flat sheets of alloy to form the shape of the gong. The other method involves shaping the gong from one large sheet of metal. It takes days of pounding metal to create a gong. 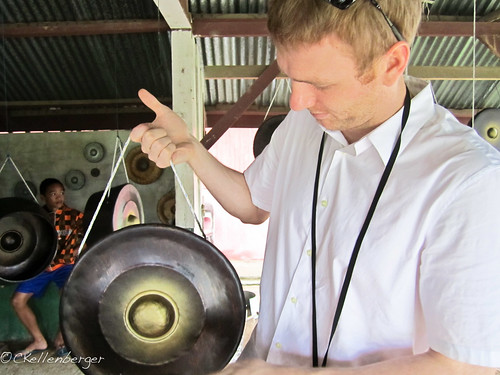 My husband playing the gong that we purchased for our home. 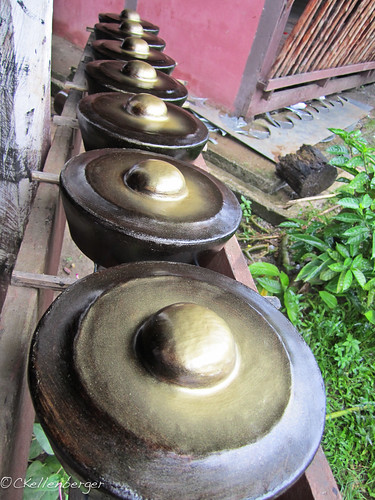 A row of bossed bowl gongs.

The village produces three types of gongs. Suspended gongs are generally flat, circular discs of metal that are hung by a cord which is passed through holes near the top rim of the gong. These gongs generally vibrate and produce a crashing sound. They are often referred to as tam-tams. The other two types of gongs produce tuned notes. Bossed gongs, also known as nipple gongs, have a raised center that are often suspended and played horizontally.

Bowl gongs generally rest on cushions and sound more like bells than gongs.  The gong is beaten with a round, hard, leather covered pad that is fitted to a short stick or handle. The resulting sound emits a wave-like succession of tones that is sometimes shrill and sometimes deep. The predominant type of gong in Kampung Sumangkap is the agung, a set of two wide-rimmed, vertically suspended gongs that is ubiquitous throughout communities in the Philippines and Malaysia.

The gongs that are sold in Kampung Sumangkap vary in depth and size, from tiny souvenirs of different shapes and designs to large ones that can reach up to two meters in diameter. Prices range from RM10-RM150.