Book Review: Keeping Up with the War God – Taiwan, as It Seemed to Me by Author Steven Crook 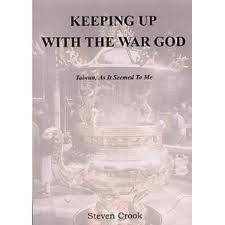 For travelers who are interested in delving beneath the surface of Taiwan’s main sightseeing attractions and flashy neon facade, I highly recommend reading British author Steven Crook’s accounts of life in Taiwan.

Crook weaves prolific storytelling and meticulous research into a finely crafted collection of personal memoirs. Spanning five years (1996 to 2001), these memoirs have been arranged and bound together – in no apparent order it seems – into a personal travelogue called Keeping Up with the War God – Taiwan, as It Seemed to Me.

The book starts with a first-hand account of what must be one of the most thrilling and unique festivals on the planet, the Plague Expulsion Festival. From there, Crook takes the reader on a journey that meanders through Taipei’s streets and alleys, scales the peaks of Taiwan’s breathtaking mountain landscapes, and visits charming aboriginal villages where folk religion still plays a major role in day to day activities.

Keeping Up with The War God is a terrific read for anyone interested in scratching beneath the surface of the standard fare that is on offer in most Taiwan guidebooks.

British-expat Steven Crook has lived in Taiwan since 1991. He has been writing about Taiwan as a travel destination since 1996. Crook has been writing about Taiwan for newspapers and magazines around the world since 1996. He is the author of more than 600 published articles and he has penned three books on life in Taiwan, including Do’s and Don’ts in Taiwan and Taiwan 2010 Bradt Travel Guide.