Day 2 in Smithers, British Columbia – Twin Falls and a Reunion 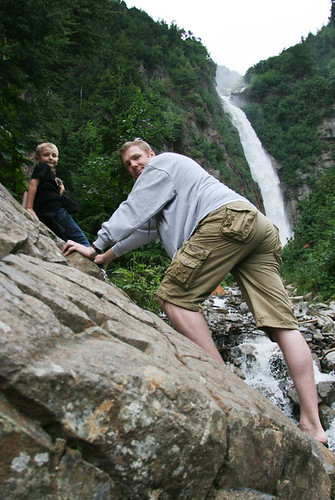 John and Caleb scaling the heights at Twin Falls in Smithers, BC

Day 2 in Smithers, British Columbia dawned bright and early. After a quick bite to eat, we set out on a little sightseeing adventure with our friends Beka and Christian. We drove just outside of town to see a local attraction called Twin Falls, a double waterfall that plunges down the mountainside from a great height. The hike was more than manageable for five-year-old Caleb, who hustled up the mountain trail like it was nothing. I guess he takes after his father in athletic ability. And me? Well, I was busy capturing those father/son moments so they both have something to look back on when this summer draws to an end. 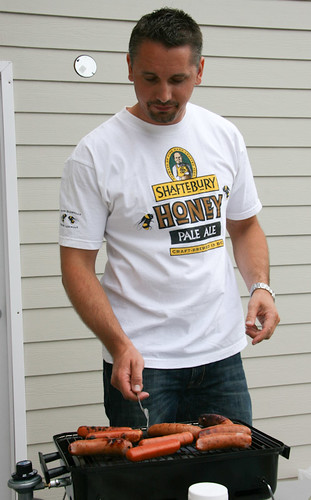 Christian demonstrates skills with a Hitachi at the Sunshine Inn.

After our morning adventures, we headed back to the Sunshine to grab some lunch. Christian and Beka had a Hitachi, so we grilled sausages on the third-floor balcony and enjoyed them with fresh potato salad and leafy greens. Beka, who is on a gluten-free diet, had a bit of surprise with her spicy chili burgers. Caleb likened them to poop burgers, and from the looks of them, we don’t think his assessment was too far off. Beka thought they tasted like ass too. She returned the poop burgers the next day and got a refund – no questions asked. 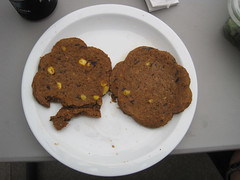 Later that afternoon, we headed over to Daena and Sam’s place to help them get things sorted for the wedding. Daena’s mom and I got started on her bridal bouquet while Christian and John transported booze and decorations over to the lodge for the wedding reception.

Once the bride’s bouquet was finished, we all piled into Daena’s pick-up and headed out to Driftwood Lodge to put the decorations up.

Driftwood Lodge is a massive log cabin that perches on a small knoll overlooking wide grassy plains and mountains. The view was breathtaking from the veranda and I could easily understand why Daena and Sam had picked this particular area for their wedding reception.

Dinner-time saw us back on the third-floor balcony at Sunshine Inn, where we were joined by my friend Sarah who arrived with baby Julia and boyfriend Shawn. Reuniting with Sarah was like taking a step back in time. Nothing had changed between us and it felt like we picked up exactly where we had left off over eight years ago.

We spent the rest of the evening drinking beer in the cool mountain air and reminiscing about the good old days.

Lake Louise has become symbolic of an iconic Canadian mountain experience. A sparkling blue-green alpine lake situated at the base of...