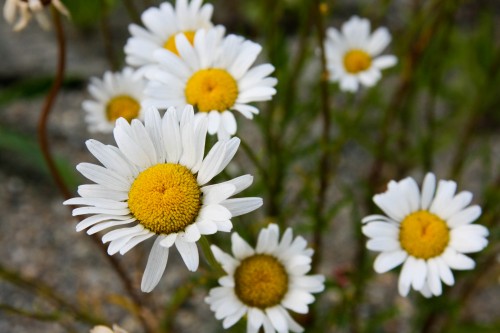 The Kellenbergers arrived in the tiny mountain town of Smithers, British Columbia on August 5, 2010 to witness the marriage of Sam Cooper and Daena Bilodeau. Daena and Sam were married on August 7, 2010 at 3pm in the afternoon on the banks of a rushing mountain river.

Smithers is dwarfed by massive snow-capped peaks, and I can honestly say that Daena and Sam – in fact, everyone in Smithers – enjoys an unbelievable view. I don’t know of many people that can boast of having a ski mountain in their own backyard.

We arrived in Smithers late on Thursday afternoon after a 4-hour drive from Prince George. Sam and Daena had arranged for their guests to stay at the Sunshine Inn, a cozy little hotel in downtown Smithers with a wonderful view of Hudson Bay Mountain.

After we had checked in and dropped our luggage off, we busted over to Sam and Daena’s house, where we joined a massive gathering of families and friends for an outdoor dinner of burgers, sausages, salad, and ice-cold beer.

When we arrived, the party was already in full swing and there was a lot of hugging and tears of joy on my end. It had been two and a half years since Daena and I last saw each other, and it was my first time meeting her fiancé, Sam. (Sam, if you’re reading this, you’re awesome!)

Also present were our travel buddies from Asia, Christian and Beka. Some of you may remember me writing about our visit to see them in Japan in 2007. We stayed with them in Roppongi Hills in Tokyo for several days, before embarking on a two-week road trip that took us from Tokyo to Mt. Fuji, Osaka, Kyoto, Nara, and Nagano.

The night ended relatively early for us after our long day of driving, but with big plans for the weekend, we didn’t mind. We were all tired, and the fresh mountain air lulled us to sleep in no time. I fell asleep dreaming of the Canadian Rockies.

Lake Louise has become symbolic of an iconic Canadian mountain experience. A sparkling blue-green alpine lake situated at the base of...

2 thoughts on “Trans-Canada Highway Road trip: Day 3 in Smithers, BC”