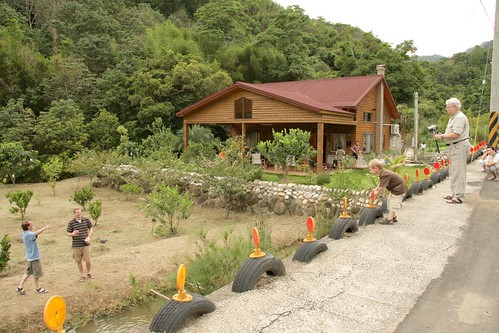 John’s four-year-old son Caleb has joined us here in Taiwan for the summer. Luckily, he arrived just in time for the 2nd annual Miaoli Cabin Party, which was held last Saturday. This was Caleb’s first trip out of Taipei and we couldn’t have asked for a nicer day or a nicer group of people to spend it with.

We started the day off by picking up David and Catherine. This was also a first for them. Catherine had only been to Miaoli once before, but never to the countryside. David has been looking forward to this day since last year’s party.

It was a beautiful day for a drive. We had the windows down and the music blaring. David brought a number Bingo game for Caleb, so we taught Caleb some numbers while John followed the directions on his new GPS. We arrived in Miaoli just in time to watch MJ and Hui-Chen get the food started with the dutch ovens. Life doesn’t get much more relaxed than a July 4th barbeque with good friends and good food. This is the second time that Becky and her family have invited us to the family cabin. It’s a real treat to visit them. Thanks very much, Becky!

It was nice to see old friends again. Hui-Chen’s mother joined us that day, and we also got to meet Andres’ parents for the first time. Neil Thompson and his family were also there, along with Becky and her family and some family friends. Later on, we were joined by Ashish and his family.

READ:  A Review and Some Help from Untwisted Vortex 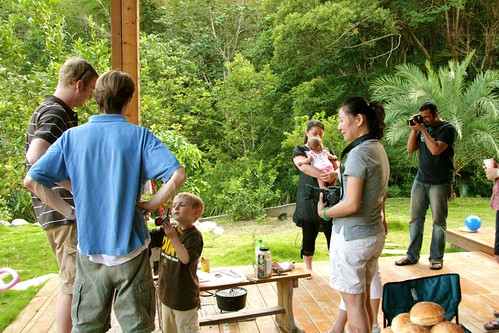 MJ cooked up a beautiful meal of roasted veggies, stuffed peppers, and chicken. He also brought out his famous chocolate and cherry cake, which is one of my personal favorites. Catherine (David’s wife) also brought some real spice to the table by cooking up three terrific dishes before we left Banciao. John and I brought deviled eggs (I’ve been told that no July 4th party is legit without them.) and John made his famous blue cheese burgers. 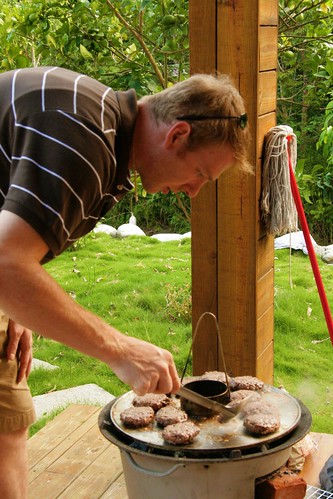 We all enjoyed watching an interesting game of ball between Caleb, David, John, and Becky’s brother. David would throw the ball over Caleb’s head. The ball would land in a 6-foot ditch. Becky’s brother would climb in and fetch the ball. He’d pass the ball to Caleb, who would throw the in the fish pond. David would fish the ball out; John would try to kick David in the water, and David would throw the ball over Caleb’s head again. (Sorry, David! :-P) Amazingly enough, this went on for ages and it was a thoroughly entertaining (although pointless) sport to watch. Later, Caleb and Becky played a little football. Well, Caleb mainly just beat poor Becky up. She looked like she was having fun though. 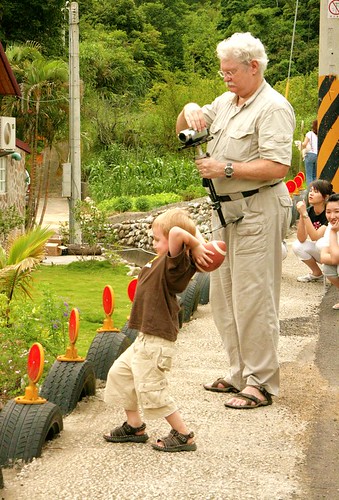 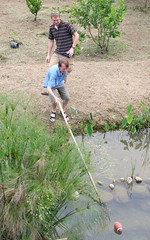 This is what happens when Caleb throws the ball. 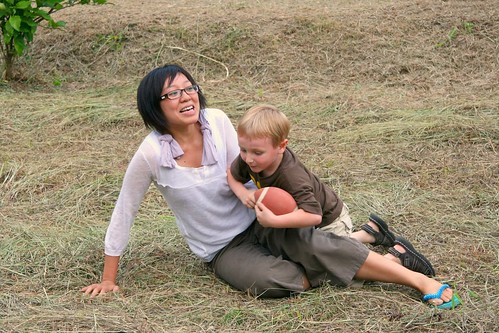 Poor Becky. Caleb just LOVED her. This is what happens when Caleb wants the ball… 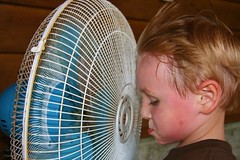 Then he had to cool off for awhile…

MJ got his karoake system set up and then we sang some golden-oldies, while everyone else fished for shrimp in the stream running next to the cabin. We ended up packing things up around 7:30pm. Our trip to Miaoli this weekend wasn’t just a treat for John and I. Caleb had a great time and hasn’t stopped talking about it since we got back.

Thanks again to Becky and her family. We think you guys are terrific! 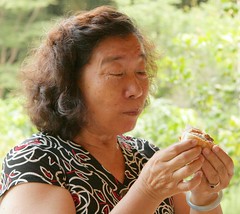 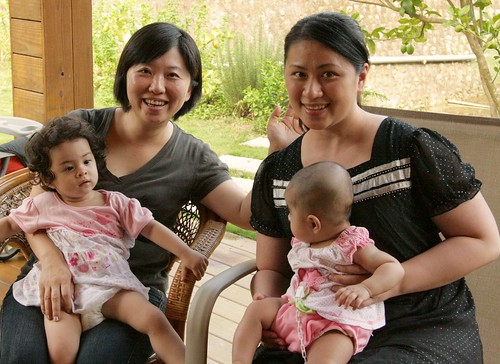 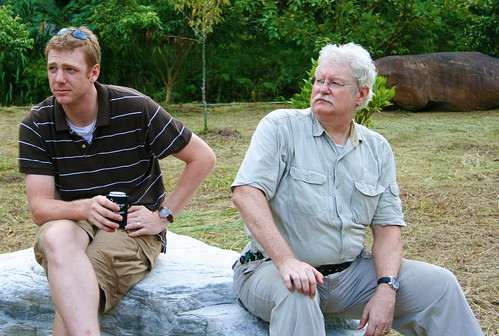 John and MJ hanging out.

10 thoughts on “2nd Annual Cookout at the Miaoli Cabin”

Hey BD BookStars!⠀ ⠀ I love being a part of th

5 star read! This was the beginning of 10+ years o

It's still #PainAwarenessMonth. Most of my awarene

'How different it is with friendship. No one picks