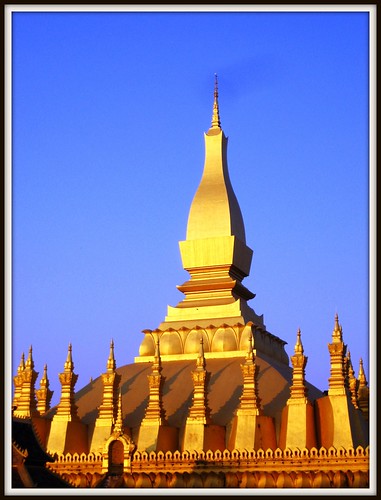 The Golden Stupa (Pha That Luang Temple) in Vientiane is the most magnificent stupa in Laos and also one of the most recognizable. The ashes of kings of different dynasties and accomplished monks are preserved here, and it is believed to hold a relic of the Lord Buddha. It is the national symbol and pride of Laos, and a symbol of both Buddhist religion in Cambodia and sovereignty in Laos.

The 45 meters tall golden stupa was built in 1566 when the country’s capital city was moved to Vientiane from Luang Prabang. It is the site of worship by monks and other devout Buddhists throughout the year.

The  biggest annual event of the year, the That Luang Festival, is held in November. It takes place on the full moon of November and lasts for seven days and seven nights. The festival opens with a procession of hundreds of monks. They visit the stupa to receive alms and votives early in the morning of the first day. The festivities continue throughout the week and end with offerings of banana leaves and flowers, which are placed reverently upon the temple.

Spread the love
READ:  Our Favorite Romantic Restaurants in Taipei

When IBS Attacks in Public: Life with Gut Health Issues

What I Want You To Know When IBS Attacks in Public "Suck it up and hold it", he says, as we're driving down Taiwan's East Coast...

How Do I Describe Chronic Pain to My Doctor?

As a veteran patient who has been living with chronic pain for 12+ years, the question I get most often whenever I post about living...

4 thoughts on “Photo Moment: The Golden Stupa of Vientiane”