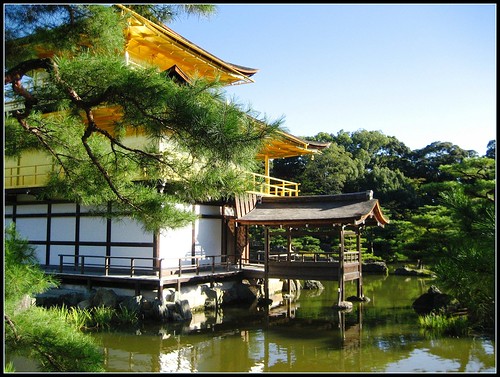 The Japanese are experts at urban landscaping, and one of their most superb examples is Kyoto’s Golden Pavilion, also known as Kinkaku-ji, formally known as Rokuon-ji or “Deer Garden Temple”.

The Golden Pavilion was built in 1397 as a retirement villa for the ruling shogun, Ashikaga Yoshimitsu. After the shogun’s death in 1408, his son converted Kinkaku-ji into a Zen Buddhist Temple. Today, it’s famous for two reasons. It’s covered in gold leaf and it houses sacred relics of the Buddha.
Kinkaku-ji is encompassed by an impressive Japanese strolling garden (kaiyū-shiki), while the heavenly beauty of the pavilion is reflected in a clear pond called Kyōko-chi (Mirror Pond). The Buddhist creation story is said to be represented by the islands and stones on the pond, and the forest surrounding it makes it one of Japan’s most picturesque settings. Consequently, it became a prized subject and continues to provide inspiration for countless Japanese artists. In 1994, the pavilion became a World Cultural Heritage site. Today, it draws tourists from all over the world.

This visually-arresting three-story building is very unusual, both inside and out. It is unique for two reasons. Its upper floors are covered with gold leaf on Japanese lacquer, and each floor reflects a different architectural period of its time. The first floor is designed in a palace type style of architecture from the tenth century, called Shinden-zukuri. The second floor is Buke-zukuri, the architectural style of the samurai. The third floor is decorated in Karayo style or Zen temple style.
In 1950, disaster struck when The Golden Pavilion was burned down by a novice Buddhist monk. In 1955, Japanese architects followed its original design to reconstruct the pavilion. The only major change they made was to increase the amount of gold leaf applied to the Golden Pavilion’s exterior and interior. The present-day structure dates from 1955. In 1987, a new coating as well as gilding with gold-leaf was added. The roof was restored in 2003.
The Golden Pavilion is often linked with Ginkaku-ji, the Silver Pavilion Temple, which is also located in Kyoto.

How to get there:
By bus: Take bus number 101 or 205 from Kyoto Station.
Nearest bus stop: Kinkakuji-michi or Kinkakuji-mae.
By subway: Hop on the Karasuma Subway Line to Kitaoji Station. Then take a bus or taxi to the temple complex.
Golden Pavilion Tours: Organised guided tours are available in English to the Golden Pavilion.