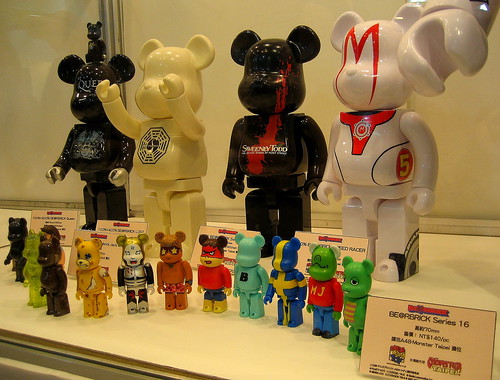 The Mira Department Store at Core Pacific City Mall (京華城)(also known as The Living Mall) in Taipei hosted the 5th annual Taipei Toy Festival early last month. The show, which ran from July 10-13th, brought thousands of insatiable toy collectors of all ages and uber-cool vinyl toy designers from around the globe through its doors. The crowds were insane.

Imagine (if you’ve been) one of Taipei’s night market. The entire event was buzzing like a horde of bees. I had a really hard time getting any pictures, and was thankful that I had listened to John and brought along my Canon point-and-shoot instead of the Digital Rebel. The close-quarters made it awfully hard to get near any of the booths, however it was kinda cool bumping elbows with some of the designers. Most of my photos didn’t turn out. But I spent wads of cash and managed to nab a few of my favorites before they sold out. 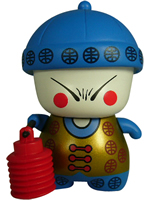 Show organizer, Monster Taipei, arranged several special events and activities throughout the duration of the four day show. With over 90 exhibitors, the event was expected to draw in over 20,000 toy fanatics and addicts of all ages. Toy enthusiasts enjoyed free daily toy giveaways, auctions for rare limited edition toys, and a chance to meet the artists and exhibitors from every corner of the world.

This was my first toy show, so I really wasn’t sure what to expect. Neither one of us were expecting the enthusiastic crowds. I’m always extra grateful for John in situations like these. Not only is he great protection, but he also has a bird’s eye view of everything. He quickly managed to locate my favorite designers and we headed straight for the Medicom, Crazy Label, Red Magic and House of Liu booths to grab my goodies before making our way through the rest of the exhibit.

One of my favorite collectibles, CiBoys from Red Magic, had several custom DIY display booths for show on the floor. I was tempted to buy a kit for myself, but I can’t draw to save my life. I just settled for the chance to enjoy some of my favorites and I managed to purchase this super-cute set as a momento of my time here in Taiwan. 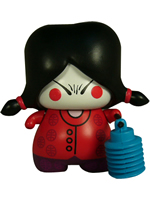 I was also on the hunt for House of Liu’s Little Mei Mei. I got a peek at Mei Mei back in May and scoured the city trying to find her, before finding out that Mei Mei and her little brother, Di Di are Taipei Toy Festival Exclusives. I managed to nab the last Mei Mei at the House of Liu booth on Sunday afternoon. I didn’t have any luck with Di Di. He had sold out earlier in the day. 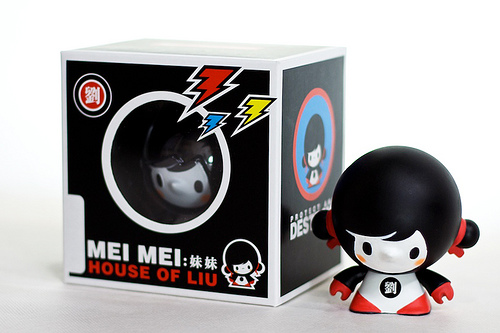 My fascination with the vinyl toy industry started a few years ago when I started collecting a line of toys released by 7-11 convenience stores in Taiwan. The original set was based on the 12 signs of the zodiac. Since then, more and more artists have offered to design sets for convenience store as a means of advertising. The results have produced thousands of avid toy collectors. Soon after 7-11 released their line, Family Mart released a line of Chinese gods created by celebrity designer Demos Chiang (蔣友柏), the grandson of Chiang Kai-shek (蔣介石).

My obsession has continued to grow. Some time last year I stumbled upon Be@rbrick Love, a site totally devoted to the love and worship of all things Be@rbrick. I fell in love with the little anthropomorphized bears and quickly discovered why the vinyl art movement is so huge.

These toys are works of art, fabricated by creators with backgrounds in graphic design and art. They are released as limited editions, and are considered to be very real and affordable works of art. No two are the same, and the amount of detail that goes into each piece is incredible.

Indoor garden dining experiences are all the rage in Taipei lately. I don't know about you, but I can't think of any place nicer to dine...

Pollution in Taiwan – Is It Bad? Yes, It’s Bad!