Postcards From Penghu, With Love

I promised a full update on my adventures in Penghu and since we are hunkered down on a typhoon day here in Taipei, I figured this afternoon would be the perfect time to catch up on my blog to-do list. As I am looking at my travel notes and photos though, I’m realizing that I’m going to have to break this up into two or three posts. There’s just too much to include!

A week and a half ago, I joined some of my Taiwanese friends on vacation on the islands of Penghu County, located in the Taiwan Strait between Taiwan and mainland China. This was my first time traveling without John in four years and co-incidentally, my first time traveling with an Asian group of friends. Before I met John, I was and still am, a huge advocate of solo travel. I discovered that traveling without John just isn’t as fun as it used to be. Being able to share my thoughts and special moments with my best friend are what make these journeys complete for me nowadays.

The other thing I discovered is that I am not a group travel kinda gal. I had a great time, but I far prefer to be on my own schedule and in control of my own journey. John and I are so in-tune with each other that we very rarely disagree on places to go.

Despite these revelations, this was an eye-opening experience for me and one that I am very appreciative of. Although some of the things we did were ‘not my cup of tea’, my hosts were wonderful, and spending this time with my friends has allowed me to see a side of them that I otherwise wouldn’t have known.

Our journey to Penghu was a short one. It was under an hour on a bumpy little prop plane, which rivals the plane John and I took on our journey to Luang Prabang. Gavin and Carol arranged for us to spend our nights on Makung Island. Because of the size of our group, we were unable to stay in the same hotel, which resulted in a lot of awkwardness and extra traveling time. Nevertheless, the hotels on Makung are beautiful. I believe I’ve seen all the amazing ones, as our driver graciously stopped for us to hop out and snap pictures whenever we pleased. 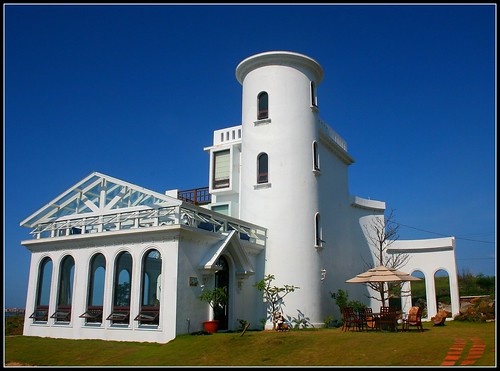 This Greek villa was one of my favorites and it’s also were Carol, Gavin, Sam and Una spent their first night. One thing John and I have noticed about traveling with Asian friends are the differences we have in sight-seeing. Our friends immensely enjoy looking at hotels they are not staying at. John and I find this a little odd, but with views like these, who cares! Plus, it gives us an idea of where to stay the next time we go to Penghu.

Our first afternoon in Penghu was spent on a floating oyster farm, which, apparently, is famous for its BBQ and fishing. Although I wasn’t all that impressed with the food, I thought the scenery was amazing and I enjoyed watching everyone fish from the pens provided at the front of the restaurant. The concept of catching your own meal from giant fish pens seems to be a popular one in Taiwan, but I think it takes the fun out of fishing. Anyone can catch their own dinner if it’s put right in front of you, right?

Later that afternoon, we rented a mini-van and headed to the scenic fishing village of Fenggui, which is famous for the sound of its waves and the sound of the wind whistling through the caves and sucking water back from the numerous blowholes in the area. 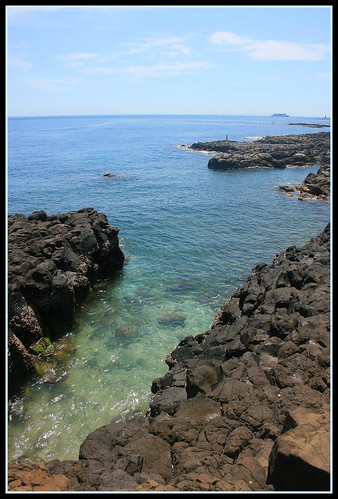 Our second day found us on a small 21-person yacht headed out to sea. Our first stop was at small village of 400 people on the island of Hu Jin, where we slipped down to the waterfront to try those delectable oysters I mentioned earlier. The village is picturesque, with charming architecture and with unique back alleys that offer a glimpse of the day-to-day life of the locals. I would have loved to spend more time there, but the squid were waiting for us and we had some deep sea fishing to do. 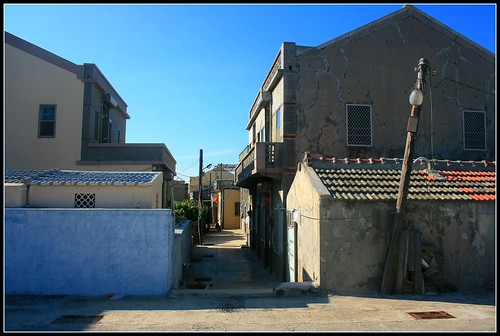 After a quick tour around Penghu’s famous basalt rock formations, we headed for deep water. We put down anchor shortly before 4pm and got our hooks in the water. The setting sunset was incredible. We enjoyed a BBQ meal on the boat and managed to catch one little squid between 10 of us.

I don’t think anyone really minded though. After the heat and an exciting day, we were all more than ready for bed. Our best day in Penghu was just around the corner.

14 thoughts on “Postcards From Penghu, With Love”

Hey BD BookStars!⠀ ⠀ I love being a part of th

5 star read! This was the beginning of 10+ years o

It's still #PainAwarenessMonth. Most of my awarene

'How different it is with friendship. No one picks