Life around Taiwan’s northern coastline is a treasure trove of scenic spots and possibilities. Providing the weather is nice, it’s one of the best scenic drives in Taiwan for motorcycle enthusiasts, because everything is easily accessible and within a day’s ride.

If you’re looking for an interesting day trip, you don’t need to go much farther than Yehliu Geo-Park in Wanli, Taipei County. At $50NT ($1.64US) per person, you can spend the entire day wandering along the paths of this gorgeous stretch of mountain and time-eroded rock. I don’t think you can find a better deal in Taiwan.

Yehliu is truly unique because the rock layers near the seashore contain substantial quantities of limestone, which are subject to sea erosion, weathering and earth movements, thus making the 1,700 meter-long peninsula almost lunar-like in many ways. The wild-looking landscape leaves little to the imagination. It’s easy to imagine what life could be like on another planet.

The area is studded with seawater-eroded holes teeming with sea-life, as well as unusual rock formations, which make the surrounding environment rich in ecological resources. Sun, wind, rain, waves and strong northeastern typhoons all make a major impact on this narrow strip of land. 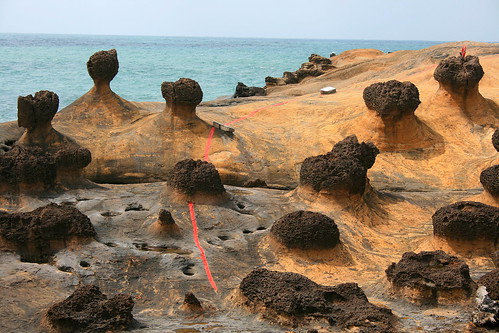 Yehliu’s famous rock formations run along a thin sliver of land jutting out into the ocean. Upon entering, visitors must walk through a plant nursery before emerging out on the bare stretch of rock running parallel to a low-slung mountain range, making it a wonderful habitat for sea-birds. The immediate area boasts a large cluster of candle, ginger and mushroom rocks, all of which gain their names from their odd-looking appearance. 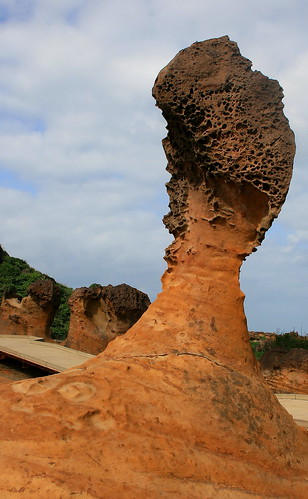 The Queen’s Head Rock is the park’s most famous attraction.

The majority of the rocks in this area are mushroom rocks. There are about 180 of them in different states of erosion. Some of them have no neck, while others have a broad or extremely thin neck. Yehliu’s most recognizable landmark and claim-to-fame perches majestically among her subjects. It’s known as the Queen’s Head Rock. Not only does it play its role well over all the little mushroom rocks, it really does resemble a queen’s head when looking at it from the right angle. 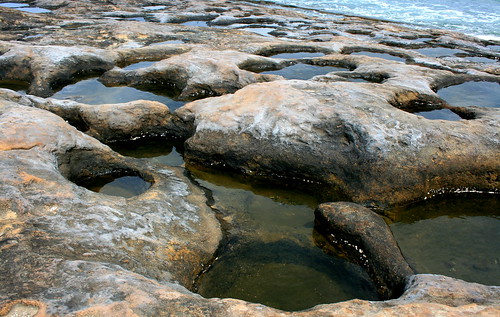 Another fascinating aspect of the landscape are these seawater-eroded holes, which teem with sea life. Pebbles and rocks brought in by the waves cut into the soft limestone rock and nestle deeper and deeper to form these lovely little puddles. Seaweed, fish, crabs and other small insects make their homes here. 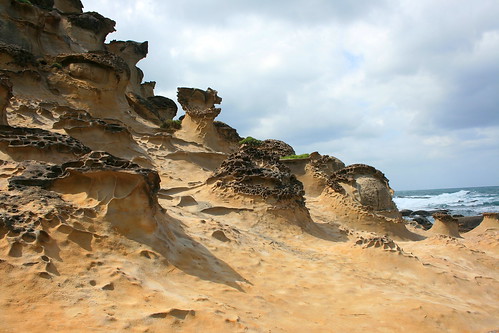 Visitors have two options upon entering the geo-park. We opted not to follow along behind everyone else and did the whole area backwards. Rather than head directly to the Western side of land, we veered right and wandered out along the sea-eroded puddles before heading in-land a bit to traverse along the bitten, mustard-colored landscape. 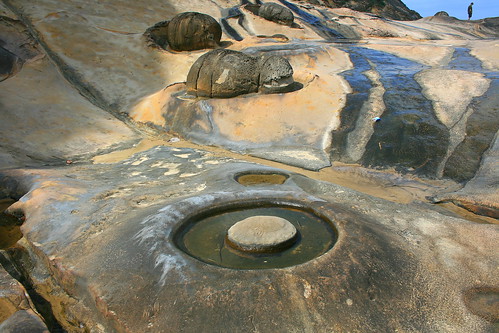 The entire eastern side of the peninsula is dotted with funny rocks of all shapes and sizes. It’s easy to tell the difference just by looking at their appearance. Candle rocks have a ball-shaped core standing out from the rest of the rock in a candle-wick shape. Sea erosion creates a circular trench on top. Honeycomb rocks are mushroom shaped, but the surface of these rocks is covered with sea-eroded holes of different shapes and sizes. Ginger rocks actually look like giant pieces of ginger root. 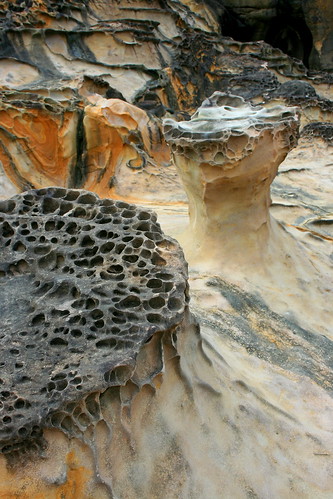 There are several sea caves to explore and it’s easy to become entranced with the gorgeous patterns created in the rock by the weathering rings. I never knew stone could be so brilliant or colorful. We didn’t see another soul as we wandered along the long stretch of land. When we reached the outer-most tip, we climbed up a set of stairs leading to a lone gazebo on the mountain running adjacent to the land. We sat and enjoyed the view for awhile before heading inland along the mountain paths running along the Western side of the peninsula. 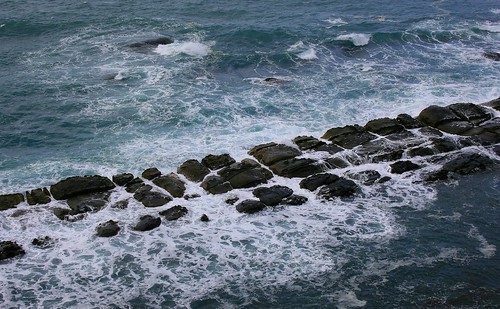 This stretch of rocks on the West side is called Bean-Curd Rock. These rocks were squeezed together as a result of weathering and have developed a lattice-like appearance. Even more interesting are the number of fossils embedded in the rocks, which tell ancient tales of creatures from a not-so-distant past. 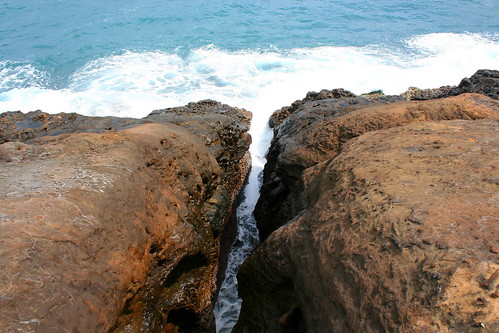 Things You Need To Know:

From Tamshui, take the express bus bound for Jinshan at Tamshui Station (near Tamshui MRT station). It comes every 30 minutes from 5:50am until 8:20pm.

From Keelung, take the express bus bound for Jinshan or Tamshui at Keelung Station (near Keelung Railway Station). It comes every ten minutes from 5:50am to 10:00pm

How To Get There By Car/Motorcycle:

Note: Be sure to check which routes are appropriate for your bike. We take option number four because it’s scenic and we can make pitstops in Tamshui and at San-zhi Pod Village.

Photo Moment: The Price of Private Space in Taiwan…Priceless

Jiufen – A Step into Taiwan’s Past