One special area just outside of Ho Chi Minh City played an extraordinary part in Vietnamese history just over 35 years ago. John and I are both interested in the history of the Vietnam War, so a visit to Cu Chi Tunnel system, Ben Duoc Tunnel has been on both our bucket lists for some time now. Located 70km North-West of Ho Chi Minh City, this unique architectural structure forms a system of underground tunnels spanning over 200km in length. 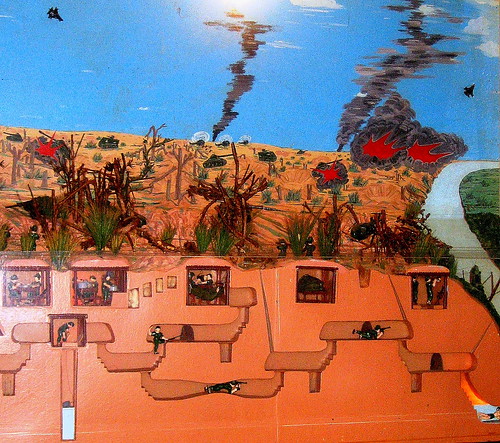 An artist’s rendition of the tunnel system

The tunnels run several layers deep in the ground and form an intricate winding maze designed for accommodations, meetings and battle preparations during the Vietnam War.

Awarded the title of “Iron Land and Bronze Citadel”, the Cu Chi Tunnel system represents the extraordinary heroics of revolutionary Vietnamese and remains a symbol of pride and unwavering determination and will power.

The area features structures which demonstrate how the people of Cu Chi lived and fought before and during the resistance.

The tunnels are a huge tourist attraction and some of the safer parts have been hollowed out to allow visitors a glimpse of what life was like inside. I entered through a hidden trap-door in the ground that is no bigger than John’s foot. Within minutes, I was sweating profusely as I crawled through the tunnels to another trap door 50 meters away. Perhaps it wasn’t the smartest thing to do as these tunnels used to be infested with all sorts of poisonous creatures. Ah well. I’ve never been one to back down from a challenge.

READ:  A Story About Human Trafficking

These next three photos illustrate the size of one of the tunnel exits. In the first photo, John measured the opening with his foot to give you an idea of the size. 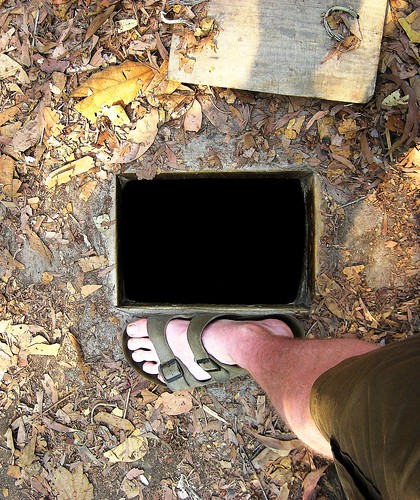 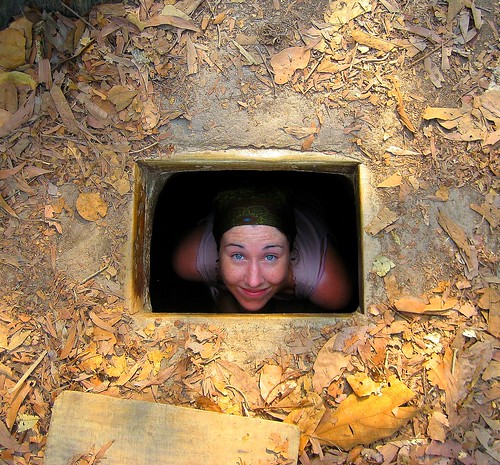 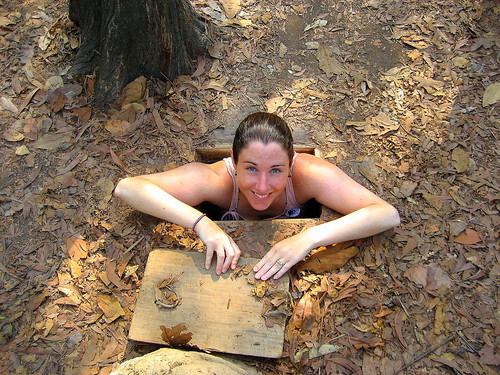 The heat in mid-April is stifling. I can’t imagine what the living conditions in those tunnels was like for the people living in them during the war. Just a few short minutes in the tunnels had me feeling dizzy. I don’t understand how people could live in them with the heat. Literally hundreds of people lived in the tunnels with American camps sitting right over their heads. Malaria ran rampant throughout the tunnels during the war and the Vietnamese only ventured out of them under the cover of darkness. Cooking must have been next to impossible, but the ever-resourceful Vietnamese worked out ways of concealing smoke while cooking meals.

Here is another entrance to the tunnel system. This one has been hollowed out significantly. 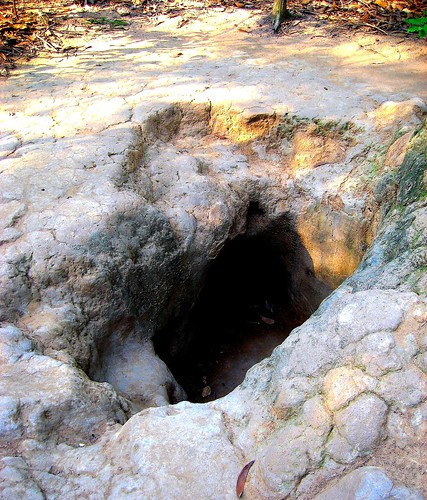 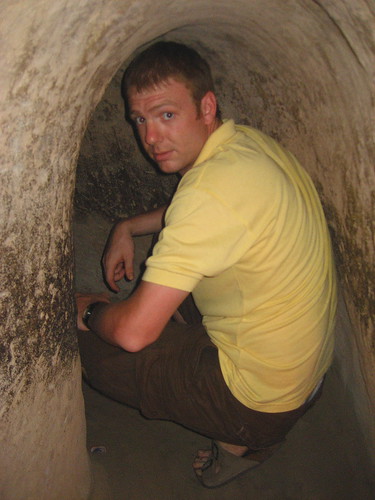 Here’s a photo of John stuck at the first turn in a tunnel. He was about six feet from the entrance and he had to back out. In addition to exploring the tunnels, we also got to see first-hand what American soldiers had to be on the look-out for. There were several horrifying home-made booby traps that leave little to the imagination in terms of the kind of damage they inflict. We also had a chance to go to the firing range, where we tried our skills with old AK-47 assault rifles.

The Cu Chi Tunnel system is an amazing historical relic from the war and says a lot about the distinctive character and will-power of the people who created it. It is also a true testament to the ingenuity of the Vietnamese people and to their ability to adapt and survive no matter what the circumstances are. 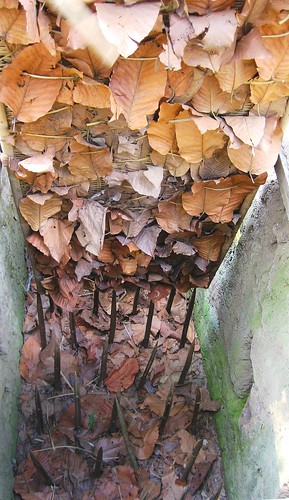 This guest post was written by Stephanie Long. From the top of the hill, Mai Chao looks like the Vietnam I've always imagined: rice...

I try hard to avoid appointments during the last w

A very dear friend with fibro and MCS passed on Ch