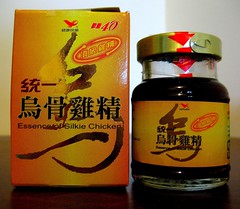 Will someone please explain what the health benefits of Essence of Chicken are?

I’ve often wondered about those little yellow and green boxes available at our local 7-11. They claim to increase your virility, strength, and overall health with a single jar.

I had my first taste today in Chinese class after my Chinese teacher told me I looked tired and sick. He suggested I try this and practically bounded out of the room to fetch me a bottle.

Without a doubt, Essence of Chicken is one of the most vile tasting things I’ve ever had in my mouth. It’s as bad as the name suggests. One sip and my mouth and tongue were completely coated with a slick, oily burnt chicken taste that I couldn’t get rid of for the rest of the day.

I thought I’d be able to get away with having a little taste, but he insisted I drink it all. I barely managed to choke it down and made a desperate grab for my water bottle as soon as I finished.

Apparently, whole chickens are cooked down into liquid form and then bottled. He had given me a special treat, as it was Essence of Silkie Chicken…not just regular old Essence of Chicken. I listened in horrid fascination as I tried not to turn a lighter shade of green, scarcely believing that people drink the stuff on a daily or weekly basis to boost the immune system.

So am I correct in assuming that ingesting Chicken of Essence promises the energy and vitality…….of a chicken?

It didn’t make me feel strong or any better than how I had started my day. This is another quack health remedy that should be avoided.

READ:  What I Want People To Know About My Invisible Disabilities

38 thoughts on “Gad Zouks! Essence of Chicken, You Say?”