NOTE: The Sanzhi Pod Village was torn down in 2009.

Nestled along a short stretch of coastline in Northern Taiwan lies a strange complex known as The San-Zhi Pod Village. This abandoned futuristic luxury vacation spot remains a complete mystery to locals and tourists alike. There are several stories surrounding the circumstances that led up to its abandonment, but no one seems to know exactly why or how the site fell into such a state of disrepair. 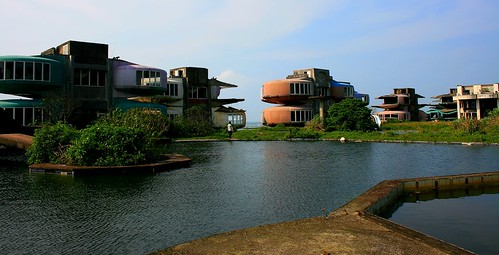 The wacky looking space village is located in Sanzhi, on the outskirts of Taipei in Northern Taiwan. It was originally constructed for wealthy urbanites looking to escape the city on weekends. The most popular story of its eventual decline claim a number of mysterious accidents ending in numerous deaths led to the halt of all construction. Locals believe the area to be haunted. 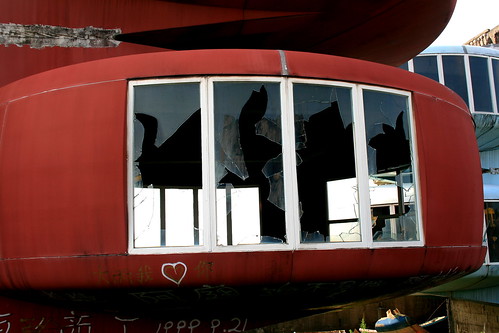 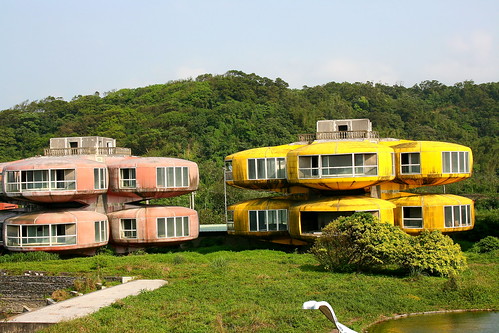 As we sped down Highway 2 towards Sanzhi last month, I thought it would be difficult to find, but the area kind of jumps out at you. If you miss seeing the giant candy-colored Smartie-like pods looming in the background, you won’t miss the massive broken-backed dragon that seems to hover over the boarded up entrance. 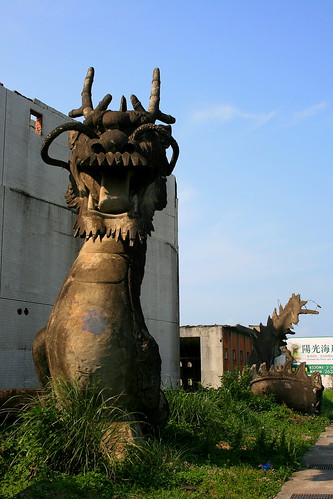 We entered through a broken window, which obviously had been shattered by squatters, and we made our way through the complex and out into the main courtyard. It was eerily quiet. It was so quiet, we could hear the crashing of the waves at the waterfront and the grass blowing. The pods were in various states of disrepair. Some had their entire roofs ripped off, others had collapsed in on themselves. It was obvious that people had been squatting in some of them, but we didn’t encounter anyone inside the pods. The sheer amount of destruction was mind-blowing. 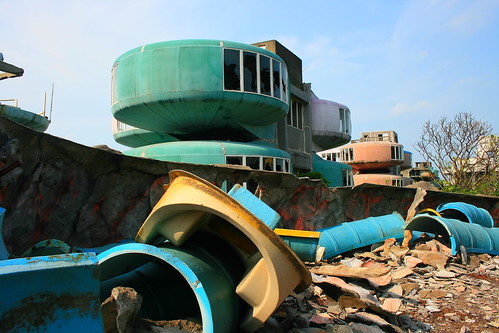 We traversed the length of the complex, slowly circling the man-made pool and ramp that was supposed to house a mini-amusement park for children. A long, white water slide lay in the murky depths of the pool. 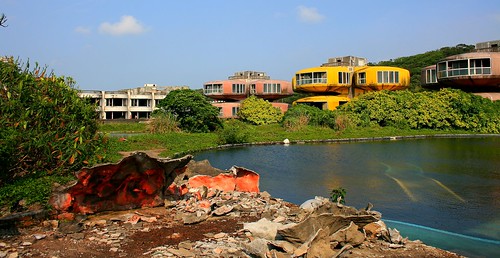 We couldn’t resist a peek inside. John found a pod that looked relatively safe. The door was hanging open, so we walked in and took a look around. Inside, the destruction and shoddy craftsmanship is evident. It’s hard to imagine these pods surviving the harsh summer and winter weather that Northern Taiwan’s coastline is famous for. The concrete stairs were uneven and crumbling apart. The collapsed roofs and walls are paper-thin and would never have survived a tropical storm. The view from the windows is unbelievable. There are miles of unspoiled coastline. Close your eyes to the destruction and for a few minutes you can see how it was intended to look before it was abandoned. It would have been magnificent. Instead, it is nothing but a complete wasteland.