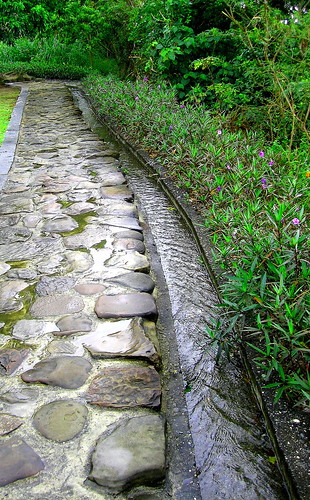 The Formosa Naruwan in Taitung City treated us well after our long, tough ride over the the mountains along the Southern Cross-Island Highway. We had arrived in Taitung the previous night, after leaving Baolai at 9am and journeying for twelve long hours on the road.

The hotel is a 5 star luxury resort, featuring native aboriginal art, terrific food and a mighty nice spa center. We decided to take advantage of the money we spent and had a long, leisurely breakfast. We enjoyed the hotel’s buffet dinner and were happy to find that the buffet breakfast was included with our room. We didn’t leave Taichung until noon.

At first it looked like it we were going to have clear skies for the rest of the day, but our bad luck stayed with us and for the second day in a row, it started raining within an hour of getting on the road.

We made our first pit stop just outside of Taitung City at a place called, Water Running Up. I had heard of this place through our friendly neighborhood Lonely Planet author, Joshua Samuel Brown. Joshua was kind enough to mail me a signed copy of his 2006 anthology of short stories, Vignettes of Taiwan, which included a short story on his own journey up this same highway several years earlier.

Water Running Up, in Dulan, is a cute little place just off the highway. A small stream running alongside of a gently sloping hill is definitely running up at a disturbing angle. John and I both stooped to dip our hands in the water and followed it up the hill and around a well-manicured path before watching it disappear into some rocks. We took a few photos and marveled at the flagrant against nature and hopped back on the bike to enjoy more the Taiwan’s famous East Coast scenery.

A quick update about Joshua’s latest adventures. As I’ve mentioned before, Joshua recently left Taiwan after finishing his work on Lonely Planet’s newest Taiwan edition. Joshua has spent the last few months traveling through Belize, where he has been doing research for Lonely Planet Belize. He has been blogging about his adventures at Snarky Tofu for many years, which is where I first discovered this talented writer. His stories never fail to delight me. His next assignment is Singapore. Way to go Joshua! Taiwan misses you!