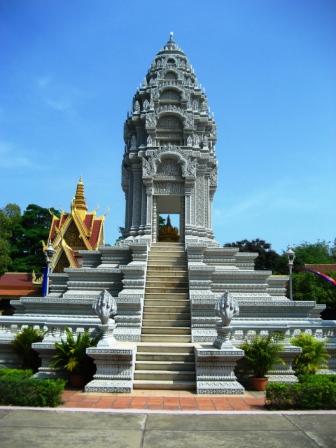 A monument situated on the palace grounds.

Just a short walk from the lively river-side promenade of Sisowath Quay in the heart of Phnom Penh stands the lovely Royal Palace, or Preah Barom Reachea Vaeng Chaktomuk as the Khmers know it.

The palace was built in 1866 and has been occupied by the kings of Cambodia ever since. The Palace was not occupied during the period of time when the Khmer Rouge reigned terror over the country.

As a palace should be, its grandeur and splendor spring from well-maintained lawns, gardens and the building complexes. It contrasts sharply with the rest of the city, which is still recovering from the brutal reign of the Khmer Rouge in the 1970’s.

The grounds are divided into three buildings.

The Throne Hall (the Sacred Seat of Justice) is still used today for religious and royal ceremonies such as weddings and coronations. 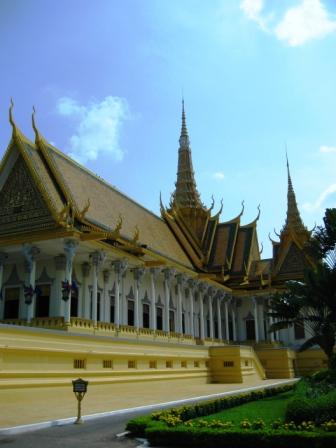 The Silver Pagoda holds a number a jeweled and highly prized national treasures and artifacts. The pagoda has been inlaid with over 5000 silver tiles, while parts of the outside of the building have been remodeled in Italian marble. The complex houses a magnificent Emerald Buddha made of baccarat crystal. Unfortunately, we were not allowed to bring our cameras in, despite having to pay to bring them onto the complex. However, the Silver Pagoda is truly a unique experience. It really is a beautiful building.

Chan Chhaya Pavilion, also known as the Moonlight Pavilion, is an open-air pavilion used as a stage for traditional Khmer-style dancing. It is easily seen from outside the palace walls and serves as a landmark in the area.

How To Get There

Just off Sithowath Quay at Sothearos Blvd. between Street 240 & 184 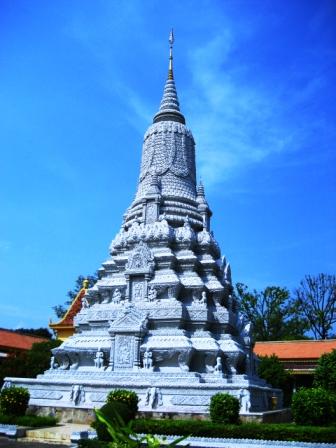 3 thoughts on “The Royal Palace of Phnom Penh, Cambodia”