After three days of scrambling over the ruins of Angkor’s ancient temples we set off on the next leg of our journey through Cambodia.

We decided to continue our journey through Cambodia by land, despite having a rather rough entry into the country at the Aranyaprathet/Poipet border crossing. Land borders always make the best travel stories. Too often, people take the easy route by flying and in the process, they miss so much of the countries they are traveling through. When Moira suggested we rent a car for the next leg of our journey I leaped at the chance. We felt we would get a real sense of Cambodia by traveling this way and we couldn’t have asked for a better way to see this amazing country. 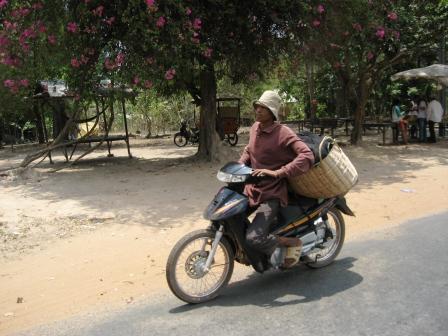 We departed for Phnom Penh on a sweltering April afternoon by car, arranged for us by our friends at the Peace of Angkor in Siem Reap. As luck would have it, everyone seemed to be traveling that day. We saw the strangest sights as we traversed across the country.

Just as we were leaving Siem Reap we noticed an inordinate amount of motorcycles on the road with livestock tied to the back end. We were leaving just as the farmers were bringing their wares to the local market. In addition to drunken pigs strapped upside-down on the back of motorcycles, we also saw bikes going by covered in strung chickens.

There were loads of traveling caravans full to the brim with journeyers, some of them sitting in the back of pick-up trucks and on the roof of their car or van. I can’t imagine what it must be like to travel like this. Consistent daily temperatures in the 30s must make this a hellish ride along with all the cloying dust from the roads.

As we headed further out into the countryside, we noticed living conditions becoming more and more rustic.

Naked children played on the red, dusty, dirt roads. They seemed oblivious to the danger of speeding cars passing close by. I saw kids leading cattle along the side of the road with a simple halter and lead. Others were pedaling around on ancient bicycles which were too big for them by several years. 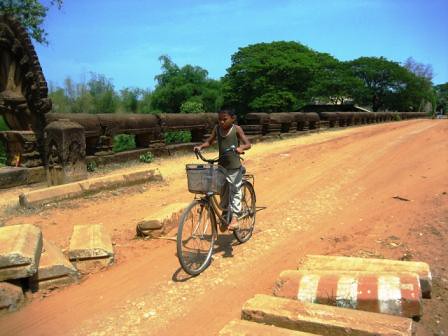 Many of the homes didn’t have any electric power. Some boasted a haystack or two out front. Others were little more than a lean-to. A few boasted colorful paint jobs. Livestock roams freely on the roads and around the yards.

We reached Phnom Penh late in the afternoon. Our journey had taken us a bit more than five hours. Our driver drove us to the newly paved riverside promenade of Sisowath Quay, where we have opted to stay for a few days.

The promenade boasts a lovely view of the Mekong. Phnom Penh just begs to be explored. We stayed at the Riverstar Hotel at 18 Sisowath Quay under a recommendation from Lonely Planet and a travel acquaintance. We felt $20 a night for a room was a little expensive, but the rooms were clean although the building itself was shabby and old. However, we have nothing to compare it to and we’ve definitely stayed in worse places. I would give it a rating of 2.5 out of 5. In terms of location, we couldn’t have asked for a better place. We enjoyed strolling along the promenade in the evenings before heading to bed.

Early the next morning, we stepped out onto a promenade full of every type of transportation available. And of course, the strangest gas station I’ve ever seen was open for business in the wee hours of the morning. We were ready to begin a new adventure in the city of Phnom Penh, but I’ll save that tale for another day.