For those of you who know me, you know I love art. Today I’d like to introduce my readers to a form of art that I have been collecting for many years – introducing the kokeshi dolls of Japan!

One of the greatest joys I have found on my travels is being able to explore various art forms in countries around the world.

I fell in love with Kokeshi dolls while traveling through Japan in 2007 and have been collecting them ever since. (Yes, these photos are part of my growing collection.)

These dolls were originally made as toys for children of farmers in Northern Honshu about 150 years ago. Since then, Kokeshi dolls have developed into a modern craft as the countryside developed culturally. As the northern hot spring regions in Japan were developed, Kokeshi were produced as souvenirs. 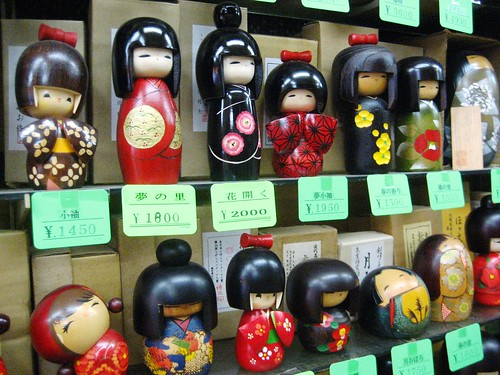 Kokeshi dolls are made from wood and are generally cylindrical in shape. Most Kokeshi dolls that I’ve found are around 30cm tall, although I have some beautiful kokeshi that are quite tall and very old.

Most of them are limbless. The dolls vary from region to region, which makes them highly collectible. Most are hand-painted in traditional patterns or kimonos. Their painted faces often feature many facial expressions from happiness to sorrow and grief. I have dolls that have facial features that have been applied with a single stroke of paint and others that are more fully painted.

In particular, I love hand-carved Kokeshi that are made on a lathe from cherry wood or dogwood. When I find one of these, I know it’s a real doll and that every part of it has been lovingly crafted from taking the wood from a tree to the final product. These dolls are getting harder to find though, as many souvenir shops now sell mass produced dolls.

I would love to get my hands on an original and traditional kokeshi from the Tōhoku region, which is where they were first discovered. This region, in particular, has authentic kokeshi that are specific to their region-specific heritage. These dolls first appeared in the Tōhoku region of northeastern Japan in the Nineteenth century toward the end of the Edo period [1603 – 1868 CE].

They were originally an ancient folk craft from hot spring mountain villages from prefectures that make up Tōhoku; Aomori, Akita, Iwate, Miyagi, Yamagata, and Fukushima, which all have a heritage of traditional kokeshi making.

Since these dolls were originally made as toys for farmer’s children, their design was meant to be simple. They were often give as gifts to parents with a new child. The child’s name was painted on the back of the body of the doll or on the base.

My collection started from our travels in Fukushima. The first one I bought is markedly different to the rest of my collection. This doll is longer and slimmer than other dolls in my collection. She was made in a region specific to this area and is an older style of doll. She’s also a granny! The only granny in my collection. If you look closely at my Pinterest photos, you can see her in the middle with the long body and blue accents at her waist.

Today, Kokeshi dolls are widely recognized as one of the traditional folk arts of Japan.

6 thoughts on “An Ancient Tradition: Kokeshi Dolls of Japan”