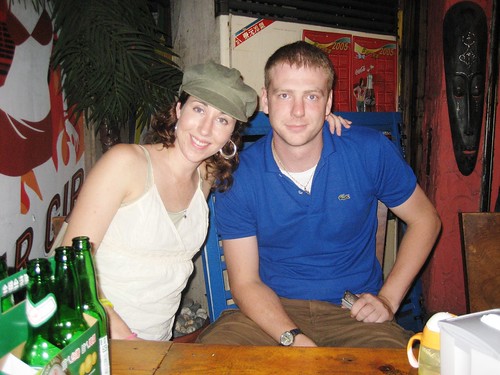 We’re back from a lovely long weekend in Kenting. This was our first journey to Kenting National Park in Southern Taiwan. We met up with some friends from work on Saturday afternoon at the High Speed Rail Station in Banciao. Our tickets cost us $1460 NT each.

We traveled just over 300 km in 90 minutes to reach Zuoying from Banciao. By regular train, this journey would have been close to five hours. We were pretty impressive with our super speedy journey. I wish all our journeys could be this easy and comfortable.

From the Zuoying Train Station in Khaohsiung, we made our way by mini-van through lightning and heavy rain to Kenting National Park. We enjoyed a late meal at a Thai restaurant and headed out into the busy streets to take in the sights before the next downpour. 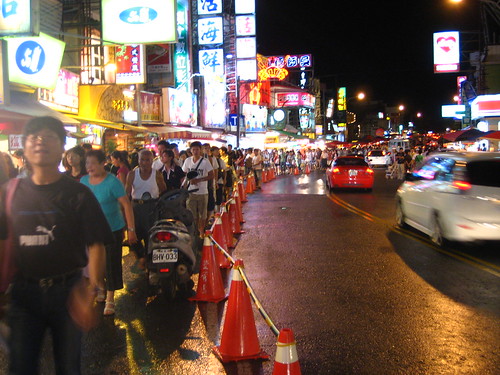 As luck would have it, we had about an hour of sightseeing before the rain dashed our hopes of exploring for the rest of the evening. We ended up hiding out in a bar for a few hours before heading up into the mountains to spend a night in a mountain cabin with a terrific view of the water. We played with some firecrackers for awhile and drank a few beers before heading to bed.

While John and I were quite pleased with our spartan but clean furnishings, the rest of our friends couldn’t stand the bugs and geckos. We cleared out of our mountain cabin early the next morning.

Our first activity of the day began at the go-carting racetracks just outside of Kenting. We had a choice of six or seven tracks. This was a first for me. Go-carting is too expensive in Canada. In Kenting it’s ridiculously cheap. $100 NT buys 20 laps. What a blast! I discovered I have a tinge of race car driving in my blood and was a little too aggressive on the track. 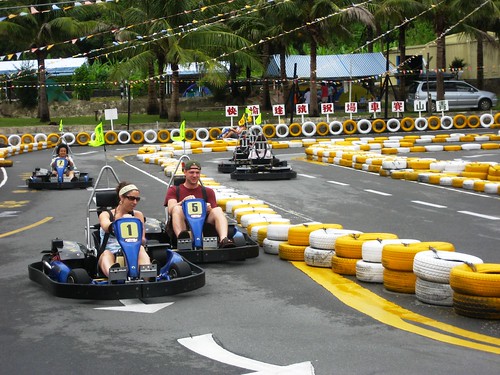 In the lead and hugging that curb!

After go-carting, we searched for a new hotel and managed to find a gorgeous little place overlooking the beach. Once we settled into our new digs, we hit the beach for a little R&R. Despite the bad weather, we really enjoyed our time at the beach. The rocky coastline allows for tons of different water sports.

That evening, we had a hard time choosing a restaurant for dinner. There are so many great places to eat! We finally settled on a cute little restaurant called Amy’s Kitchen. We had dessert at Big Tom’s Ice Cream Bar and marveled over their specially patented super-duper massage spoon. This swanky massage spoon is supposed to give better taste, speed up your metabolism and keep you fit. Here I am with my spoon. I didn’t notice any special lingering side effects but it sure was good for a laugh. 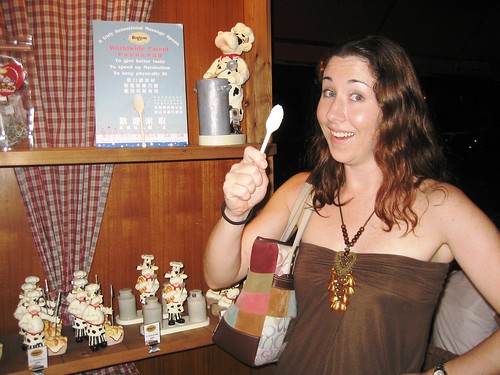