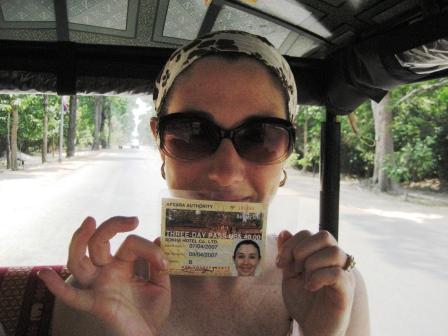 With my three day pass to Angkor Wat.

It’s almost impossible to post pictures of Angkor Wat. There are millions of images of Angkor available on the web and none of them really do it any justice. Angkor is indescribable…but I’m going to give it a try.

The best part of the day to visit is definitely early morning. By 9am, we were roasting in the heat, so we got up at 5am each morning and took a tuk-tuk to Angkor Wat to catch the sunrise and to get scrambling over ruins before the crowds arrived. We were never able to get a great sunrise picture. The sun never visibly rose. The heat of the hot season kept the entire area blanketed under pale lilac skies and cloud cover.

Our first morning at Angkor involved a short stop at the front gates to get our three day passes. It felt like stepping into another world once we passed the front gates. The entire Angkor Park is a testament to sheer magnificence and mind-boggling mystery. Built to withstand the weight of time, the natural elements and the ravages of war, Angkor Wat is one of man’s most curious and spectacular accomplishments. 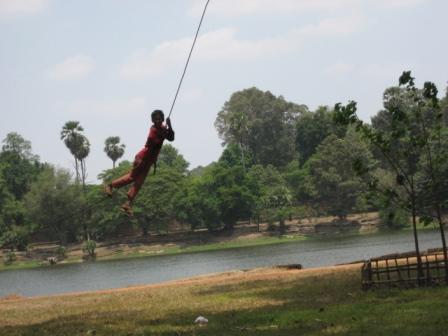 A young boy swinging on a rope at 6am just outside of Angkor Wat.

I couldn’t help but imagine life as it was back in the 1oth century when the temples and cities surrounding the mighty Ton le Sap were nearing the pinnacle of their earliest achievements. One is overwhelmed with awe at the grandiosity of these early architectural feats of wonder. I dream of long parades of worshippers moving slowly along the banks of the causeways leading up to each flamboyantly rich construction. I can practically hear the sound of hushed reverence when entering the main hall of the monastery. There are higher powers here. The air seems charged with energy from ancient centuries of utter devotion. Every carving, every surface in this place is charged with cultural symbolism and rich significance.

READ:  The Hidden Faces of Cambodia 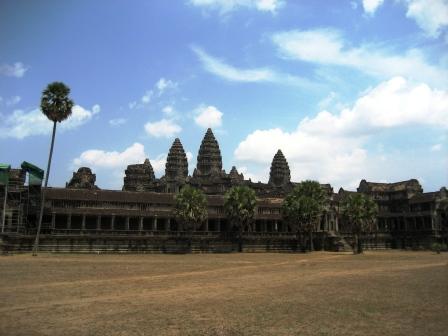 Angkor Wat will be enjoyed for generations to come. We were here to show our respect to architects of old. I hold immense respect for these people of the past. I wonder now more than ever what life was like back then. 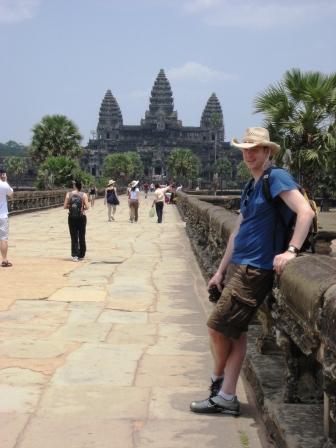 The obligatory travel shot. John in front of Angkor Wat. Mine didn’t turn out nearly as nice as his. 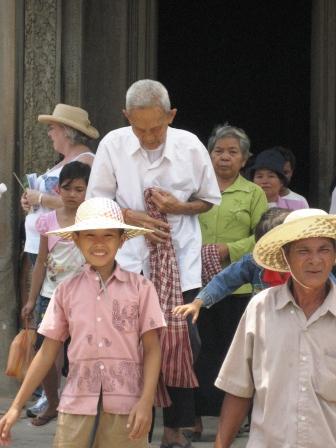 Visitors coming out the main entrance and heading back to town for lunch. The ruins were deserted after everyone left and we were free to explore the mysteries of Angkor on our own. Despite the shimmering heat, we had most of the ruins to ourselves for two hours.

This guest blog is by Ava Apollo. When she's not writing for MSW, she's blogging about adventure travel at bemytravelmuse.com, with a...

Passports with Purpose Fundraiser: Help Build a School in Cambodia

Christmas is a season for giving and you can make a difference today! Travel bloggers around the world are hosting giveaways in support...

9 thoughts on “Reflections of Angkor”