Thailand Photo Journal: The Grand Palace of the King 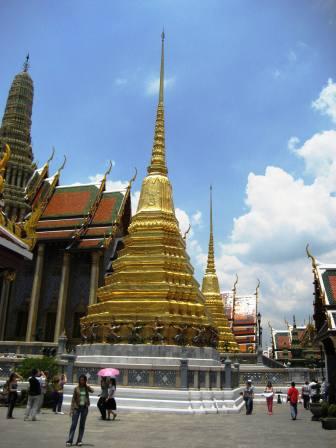 Stepping into the grounds of the Grand Palace in Bangkok is like stepping into another realm. Strange and beautiful mythical creatures and demons seem to jump from every corner. The air sparkles and shimmers with heat, humidity and fragrant incense. Every surface is encrusted with jewels and mosaic inlay. Treasures of indescribable nature are housed on these grounds, including the legendary Emerald Buddha, which finds shelter in this immense complex. Millions of worshippers and visitors from far away lands make the pilgrimage to this fabled palace to pay their respects and say their prayers. 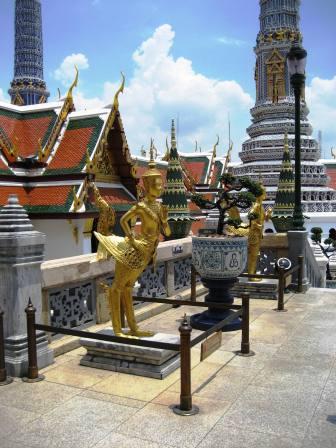 Bronze image of a half-human and half-deer in front of the Royal Pantheon.

The Grand Palace grounds are so complex and intricate that it’s best to hire a private tour guide to show you around for a few hours. We spent the better part of a day at the Grand Palace. We started our tour by hiring a private guide for 100 Baht for a few hours. We found ourselves with an elderly gentleman by the name of Daeng. He immediately put us at ease with all his silly jokes and was an absolute fountain of information. He gave us facts and figures. He told his fables and stories and was quick to point out intricate and small details that we would have missed otherwise. We tried to trick him up with some hard questions and he sailed through everything with ease. We were mightily impressed and after finishing our tour, we had to admit he had done a fine job. We gave him a hefty tip and continued on our own. 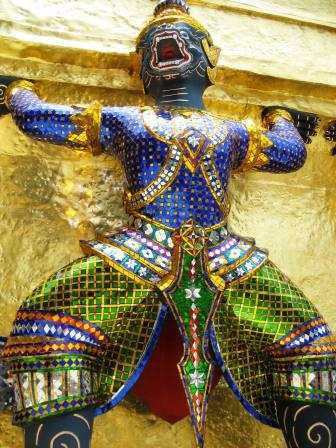 The Grand Palace of the King was built in 1782 and features more than two centuries of history and splendor. In addition to being a royal house of the monarchy, the Palace complex also houses the Temple of the Emerald Buddha (Wat Phra Kaew) and several government offices. The Grand Palace complex and the enclosed Temple of the Emerald Buddha are architectural delights which are guaranteed to dazzle even the most hardened of travelers. Gleaming gold, shimmering green and orange tiles and gold tipped spires draw the eyes upward. Stupas and pillars are richly inlaid with colorful bits of mosaic tiles. The riot of glistening colors all pay homage to the Emerald Buddha and the monarchy. 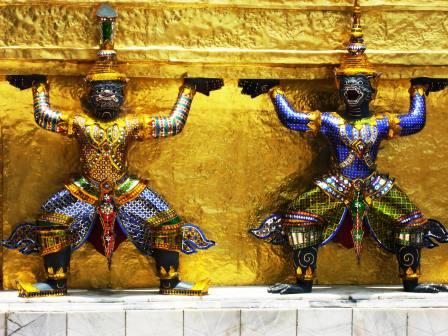 Demon and monkey caryatides of one of the two gilt stupas.

This monument was inlaid with colorful mosaic tile and gilded paint in honor of Kings Rama I, II and III. 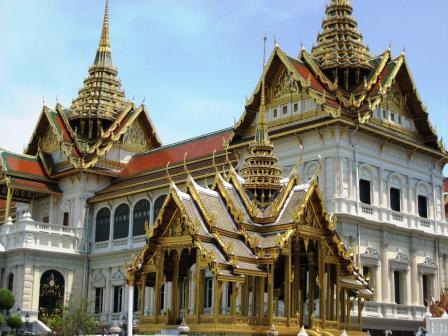 The Palace Complex is built on 94.5 hectares with more than 100 buildings. Today, these buildings are only used for ceremonies. The royal family lives in northern part of city. 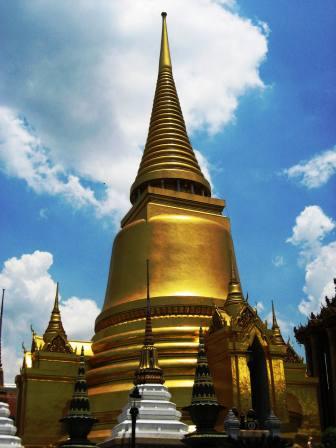 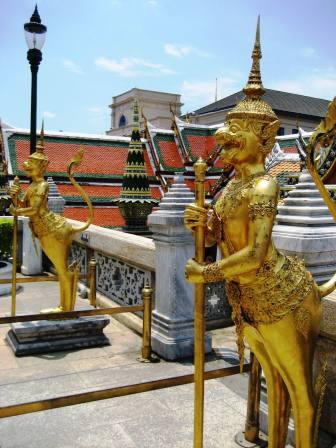 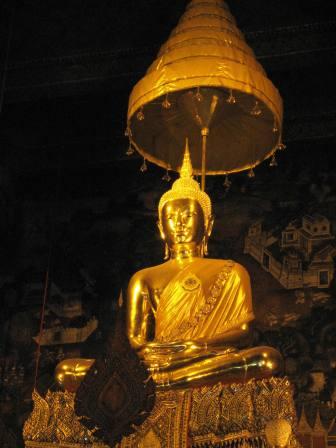 The 75cm Emerald Buddha sits on a high platform in a richly decorated bòt. It s guarded by mythical giants called yaksha. The Buddha is always dressed in different robes for each season. It was discovered in 1434 A.D. when lightning struck a stupa in Changrai in Northern Thailand. A Buddha statue was found inside and was brought to an abbot’s residence. Shortly after, the stucco on the nose flaked off to reveal its green surface. Interestingly enough, the Emerald Buddha isn’t made of emerald. It’s thought to be jade. People flocked from all over the country to worship the beautiful statue.

This photo is one of my favorites. Can you guess what it’s for? Back in the day, elephants were used as a primary means of getting around. This was where the elephant’s were ‘parked.’

Admission: 200 baht to see the Temple and Grand Palace

A 2 hour guided tour is available for 100 baht

Samabe Bali Suites and Villas: A Luxury All Inclusive Resort in Bali

Travel blogging is hard work and there often isn’t a huge financial payoff for the amount of time and energy that gets poured into...

Going All Inclusive at The Grand Mirage in Nusa Dua, Bali

Bali has really captured a special spot in our hearts. Our love affair with this beautiful Indonesian island started back in February 2006...

We all have trouble deciding where to go when we have a holiday, but seek no more. Spending your holidays in Thailand is an ideal family...

5 thoughts on “Thailand Photo Journal: The Grand Palace of the King”