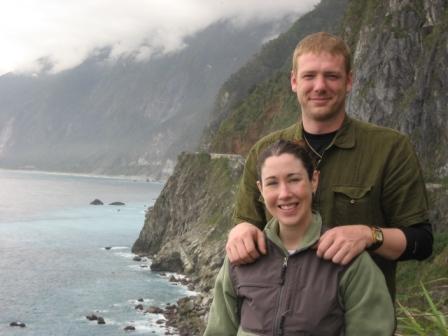 John and I stopped to take a break and enjoy Taiwan’s scenic eastern coastline. Actually, we were so entranced with the sights, we probably stopped at least a dozen times that day, despite the windy and rainy weather that persevered over the two days it took for us to drive.

The Su-Hua Highway on Taiwan’s Eastern Coastline is a dramatic drive that everyone should experience several times in Taiwan. It’s also one of the most scenic highways in the world. I left a piece of my heart on that highway and now truly understand why people say Taiwan will touch your heart. The whole coastline is lined with odd rock formations, towering mountains and cliffs, rocky bottoms and crashing waves. After leaving Toroko Gorge, we arrived at a place where mountains literally meet the sea. Chingshui Cliffs are a testament to nature’s awesome beauty and power. These sheer rock walls plunge straight down into the sea from over a thousand meters high.

I especially loved seeing all the fishmermen out. What brave souls they are, to tackle these rocky shores for a fresh catch everyday. It spattered rain and the winds blew hard, yet we saw people on the rocky shores throughout the day. Some were walking the sea platforms, others were reeling in large catches, and still others were picking their way among the rocks with shoes in hand.

There are lots of nearly deserted beaches along the coastline. Most of them are rocky, but some of them boast fine sand as well. We stopped at this one for half an hour to walk the beach and search for smooth beach pebbles to take home for souvenirs.

We traveled from Taroko Gorge to Fulong that day. We were on the bike for 8 hours and arrived in Fulong shortly before 6pm. We couldn’t find our hostel, and when we stopped to ask for directions at another hostel, we were invited in to look at their rooms. They pointed us in the direction of another hostel (also owned by them) and we ended up looking at six or seven rooms before we found the hostel we’d booked at.

We also checked out the luxurious looking Fulong Beach Resort Hotel. Phone 886 02 2499 2381. Prices start at $4800 a night. There are also plenty of villas here for rent. We will definitely consider staying here for a treat this summer.

Hostels are interesting in Fulong. They all offer exactly the same thing but vary in price. The hostel we booked ourselves into was charging $1800NT for the night. It was the most expensive and when we asked why, we were told the room was more because it had a better mattress. “An extra $800NT for a better mattress?” I asked increduously. It seems so. Since we already knew that all Taiwanese mattresses are rock hard and not up to Western standards, we decided we’d save the $800NT and went to a cheaper hostel across the street. That night, we ate a quick meal of instant noodles and fell asleep on our rock hard mattress with dreams of cliffs, mountains, sea and sky dancing in our heads. 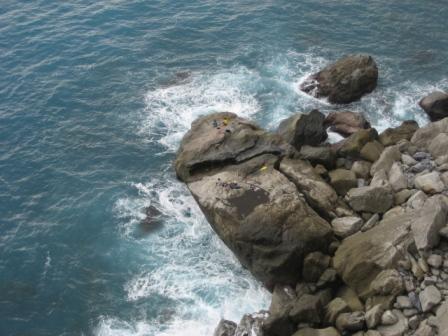 There’s fishermen on them thar rocks below.

6 thoughts on “Taiwan Travel Journal : Notes on The East Coast”