My Several Worlds needs some light-heartedness after my previous post.   So, now I’m back on track again…sorta.

As I’ve mentioned before, some of the best Taiwanese food we’ve sampled here can be found at local food stands and carts, which are in every nook, cranny, back alley and corner of Taiwan.  Taiwanese street food is great and provides good quality dining for low costs.  It’s quick, easy and fits in with our busy lifestyles.

When I first moved to Asia, I didn’t really enjoy Chinese sausage that much, despite the hoards of people who enjoy it here.  I found it too sticky and sweet for my tastes.  Occasionally, I would indulge in some dried smoked sausage (làcháng ??) while in Northern China, but for the most part, I left it alone.  Since moving to Taiwan, my opinion has changed somewhat.

Lately, we’ve discovered the joys of eating Taiwanese pork sausage.  Taiwanese sausage differs from Chinese sausage because it’s not dried, it isn’t as fatty and it tastes a little sweeter.  We’ve stopped at several sausage stands over the past month to sample these local treats, which are often made by local butchers and sold at the markets.  It isn’t available outside of Taiwan, which makes it extra special. 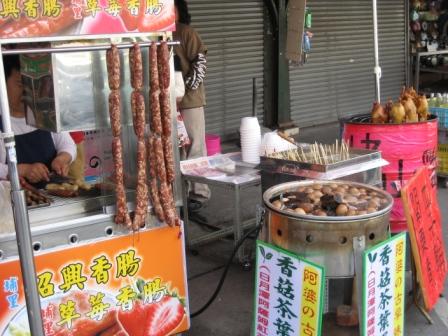 Sausage photos of the month?  Hmm…a strange subject, but then again, some of the food here in Taiwan is strange.  Personally, I love the variety. 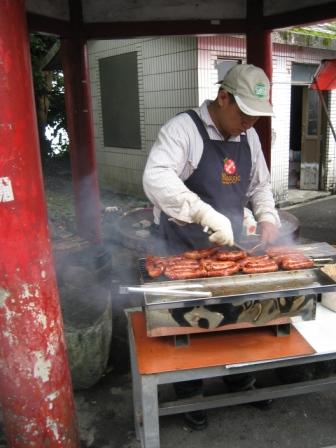 We stopped for a break at an observation platform while traveling along the Su-Hua Highway last month and noticed a  large group of people crowded around a cart, so we lined up too.  The vendor was pleased to tell us a little bit about his product while we waited.

In addition to making his own pork sausages, he drives his sausage cart to an observation platform next to the Huide Trail for a few hours every day to provide light snacks for tourists passing through.  On a really good day, he can expect to bring in $1200NT.  On a bad day, he barely clears $300NT.  On average, his sausage sales at Huide Trail bring him an extra $10,000NT a month.

His sausages turned out to be the best snack of the day!  We enjoyed our sausages while looking out over Taiwan’s magnificent eastern coastline.  When we returned for another, he had sold out.  Sadly, he had no more sausage for us, but we learned that sometimes it’s worth jumping in a huge line just to see what all the fuss is about.

7 thoughts on “Gotta Luv That Sausage”