Our first view of Tianshiang, deep in the heart of Taroko Gorge National Park

We arrived in the heart of Toroko Gorge after a butt-numbing drive along narrow mountain roads and through rock blasted tunnels. Most of the roads from the Kuan Yuan Sea of Clouds on through to Tianshiang were a winding, twisting mess. I can still taste the bitter fear lodged in the back of my throat as we whizzed by sheer drop-offs thousands of feet high.  At times, I couldn’t even look down because I was afraid I’d see piles of broken cars and scooters in the depths below. Surely people had lost their lives here, driving along this lone mountain highway? 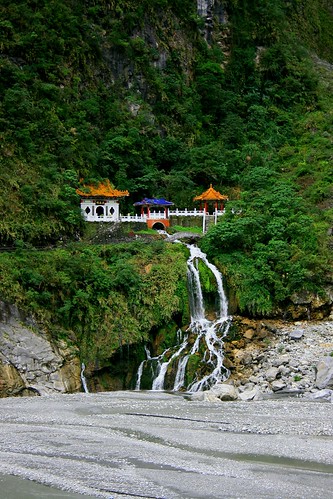 There were times when I wished we were in the comfort and relative safety of a car. But, then I’d remind myself that we were on level with everything that nature was throwing at us.  I willed my thigh muscles to unclench and relax a bit, and for awhile, I did. Then we’d hit another steep drop off and I’d look up at the towering marble rock face and the fear would grip me once more.  By the time we arrived in Tianshiang, I had to be pried off the bike. 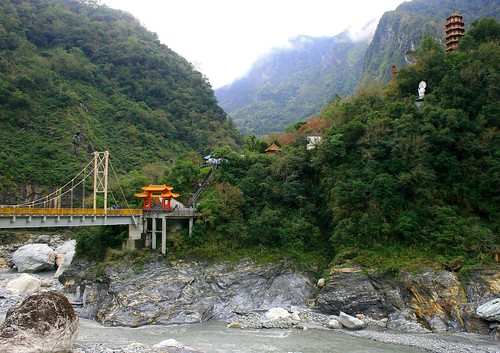 The first thing to be seen when arriving in Tianshiang is the pagoda and temple, located on a hill across the river.

For those of you who aren’t familiar with Taiwan’s most beloved and well-known tourist attraction, Taroko Gorge is a marble walled canyon that stretches for 19 kilometers through Hualien. Taroko is serene, immense, pure, noble, and majestically superb.

I’m wracking my brain for adjectives that are less used to describe this place and nothing comes to mind that will do it justice.

It’s a place you have to see for yourself.  Nothing can prepare you it.  It’s an experience you’ll never forget. 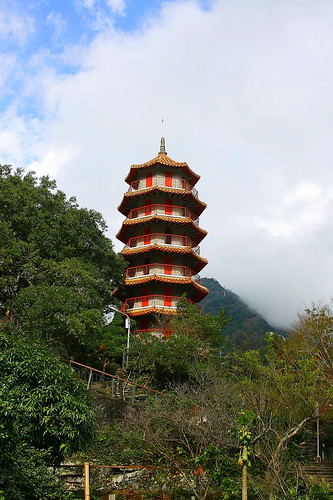 We arrived in Tianshiang by late afternoon and spent a few minutes trying to locate our hostel. We had booked rooms at the Catholic Youth Hostel for $700NT a night.  It was pretty cheap compared to what we paid elsewhere. It’s also listed in Lonely Planet as being the best deal in Taiwan.

The youth hostel is the cheapest place in Taroko, but it’s also the strangest looking hostel I’ve laid eyes on to date. It looks like it was thrown together in a helluva hurry and is a mix of odd and mismatched rooms connected by fire escape stairs which have been painted in vermillion. Our clean and very basic room was on the upper outdoor level.  John was several inches too big and could only stand in the room when he slouched. It was tastefully decorated in burnt orange and wood with satin curtains in a lovely shade of lavender. We slept on tiny wooden cots and rock hard pillows.  We didn’t care though. We were so tired, we would have slept anywhere!

As far as accommodations are concerned, there aren’t a lot to choose from in Tianshiang. We were very very surprised to see how shabby the Grand Formosa looks, despite the warning in our trusty Lonely Planet. It’s in desperate need of a face-lift!  Despite its exterior, it’s lovely inside and after seeing our own accommodations, we were quite tempted to part with $8000NT to enjoy a good night’s sleep. We ended up settling on a nice buffet meal and returned to our tiny little room with some beers and a deck of cards to while away the evening.

We didn’t waste any time in bed the next morning and had the bike packed by 9am. Our journey through Taroko was quick. We didn’t stop to take advantage of the hiking trails because our goal on this trip was to drive the entire length of the Central Cross-Island Highway within a time frame of five days. We have every intention of returning sometime this summer to take in the sites on foot.

There are loads of trails around the gorge.  Most of these trails have been used for ages and are the traditional trails used by the Atayal people, Taiwan’s second-largest tribe. We were a little sad that we weren’t able to take the time to explore places like Swallow’s Grotto, which is a series of cliffs so tall that sunlight only reaches the bottom of the gorge at noon.

Instead, we drove at a leisurely pace through the gorge. In some places, the rock cliffs were so high that we couldn’t see the sky. A thick mist of clouds hung over the tops of the mountains like ethereal spirits from another realm. All along the way, we saw huge chunks and boulders of marble everywhere. I think I could drive that road every single day and never get tired of it. The best sight of the day was seeing a guy taking in the sites on his skateboard. We passed him so quickly that I didn’t get a chance to snap a photo, but it seemed a brilliant way to take in Taroko in all its splendid beauty.

1 thought on “Taroko Gorge in Taiwan: The Jewel of Taiwan’s National Park System”