We left Ching Jing early on the morning of the 19th of February. We had just completed the southern fork of Taiwan’s Central Cross Island Highway, which took us over Hehuan Mountain, down through Wushe and on to Sun Moon Lake. This time, we intended to cross back over Hehuan Mountain around noon, in order to follow the eastern route through Taroko Gorge and on to the east coast.

The Taiwanese believe that no visit to Taiwan is complete until you’ve made a trip along this road. Now I understand why. The scenery changes endlessly from lush valleys full of palm trees, to alpine forests, snow-capped mountains, steep cliffs, rocky streams, hot springs, rivers, lakes and sea.

How can anyone not be enamored with this beautiful island?

The highway was completed in 1960. John and I marveled at how this road was made and could scarcely believe that it was only four years in the making. The road is cut precariously into and along mountain sides. It weaves and turns so much that I lost all sense of direction. We would make a sharp turn and end up driving back the way we came. We drove through tunnels that had been roughly blasted out of rock. Thousands of people struggled to make this road and hundreds died or were injured while doing so.

The drive up the mountain was gorgeous and we were happy to see what we had missed under the cover of darkness two nights before. We were traveling up the highest road in Taiwan on a 150cc motorcycle, easily hauling close to four hundred pounds of flesh and belongings. Despite the warmth of the day when we started out, the bike engine soon started to whine from the strain of climbing ever upwards and higher into the cold mountain air. Eventually, we were driving above the clouds through the Hehuanshan Forest Recreation Area at over 3400 meters. 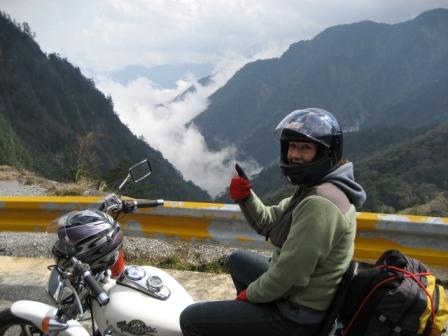 We stopped to snap a photo of the dense valley of clouds below us.  Neither one of us realized that in a few short hours, we’d be driving through it.

It was bone-chilling cold, but I couldn’t help but gaze in wonder at the surroundings. We passed below lofty peaks and towering rocks. We drove through mist, clouds and alpine forests of chinese juniper, nanmu trees, pine and conifers. It was so coldly, wonderfully beautiful. Trees literally reach to the clouds and heavens here. I’ve never seen anything like it before in my life.

We only spent a few minutes on Wuling Peak. It was too cold and we could barely see three feet in front of us. We ended up stopping at Hehuan Lodge a few minutes later to warm up with some tea before continuing down out of the mountains. Eventually, we stopped to take off our gloves, hats and scarves and gazed for a while at the beautiful valley of clouds that hung just below us. Then we continued on until we hit Chinma Tunnel and the beginning of the old Hehuan Trail system, which brought us to the entrance of Toroko Gorge.

We stopped at a rest station to read about the local flora and fauna and then continued riding in the warm sun for half an hour before the trail took us across the mountain and out of the sunlight. As soon as we crossed over to the other side, it felt like we were passing over into another world.

The old Hehuan Trail system is like something out of the movies. The air grew moist and misty.  Everything was covered with a heavy green moss and the lush vegetation seemed to overrun everything. Trees seemed to creep up on us out of the mist. It was deadly quiet and eerie.

Then it started to rain and the roads grew slick and wet. I barely relaxed for the entire two hours it took to drive. I would’ve loved to snap some pictures, but the rain prevented us from doing everything but continuing on the course we were on. The road continued to twist and turn like a dragon’s back and we went with it. Sometimes I had to close my eyes in fear as we came dangerously close to the side of the road. Everywhere we looked were warning signs for falling rocks and debris. I was terrified and yet I’ve never felt more alive. I felt so small compared to the awesome power of nature.

If you look closely, you can see the road is literally carved out of the mountainside.

Tianshiang was a most welcome sight after another six hour bike ride. I think both of us were on sensory overload. We had seen so much in three days that we were barely able to register our surroundings. I was vaguely aware of being nestled in on all sides by jutting green mountains with a blanket of mist and clouds hanging far above our heads. Our only priority was getting some warm food and a good night’s sleep so we could enjoy our drive the next day, as we knew the best was yet to come.

3 thoughts on “The Central Cross Island Highway in Taiwan”