We couldn’t have asked for a nicer day to explore  Sun Moon Lake and the area surrounding it.

We arrived around 11am and stopped for awhile to admire the boats on the water near the harbor.

Sun Moon Lake is nestled amongst mountains and I can easily understand why it is such a popular tourist destination in Taiwan. We were especially surprised that there was no admission charge to the lake. We had been told to expect one. In fact, our day at Sun Moon Lake was the cheapest day of our whole journey. We were admitted to all sightseeing attractions free of charge. I was mightily impressed.

Kuanghua Island, now known as Lalu Island is in the center of Sun Moon Lake.

It was nice to get off the bike and stretch our legs a bit, but we were soon surrounded by a group of people all asking about the bike and inquiring about our travels. So we hopped back on the bike. It took us about an hour to travel the road around Sun Moon Lake, a manmade lake that was built in 1964. There used to be two lakes, the Sun and the Moon, before the Japanese built a hydro-electric dam and raised the water level.

We drove around to the other side of the lake and stopped at Hsuangchang Temple to look out across the lake. In particular, we were looking for Lalu Island, which is located in the center of the lake.  Lalu Island is a rather unique place that isn’t open to the public. It is a sacred place to the Shao, the aboriginal tribe that once flourished in the area and made their home on the island.  Lalu Island was once a large island, but when the water was raised, the island disappeared under the water and sadly, the Shao were forced to move from their sacred homeland. Today, only the tip of this once mystical place is visible.

Once inside the temple grounds, I noticed a group of carved animal stools. I quickly made the connection and located all twelve of them, one for each animal of the Chinese zodiac. I made sure that we had our pictures taken on our representative animals. (I’m a tiger and John is a rooster.) We also made sure we had our pictures taken on the pig as well. It is the Year of the Pig, after all. We spent about forty minutes here, but I wish we’d had more time to spend here as the temple grounds are immaculately kept. Apparently, the temple holds some of Asia’s most sacred Buddhist relics.  This temple was named after a Chinese Buddhist scholar by the name of, you guessed it, Hsuan Tsang. 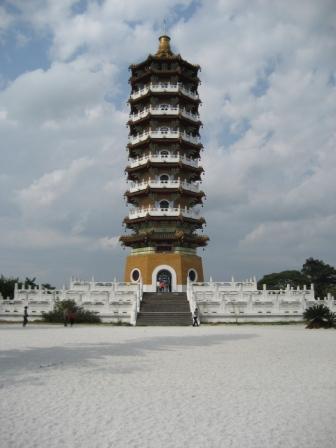 The Pagoda of Filial Virtue was a must-see on our list of things to do at Sun Moon Lake.

It was built by Chiang Kai-Shek in memory of his mother. The pagoda is on Mt. Sabalan, which is 954 meters in height.  The pagoda itself was built 46 meters high in order to meet an elevation of 1000 meters. We really wanted to see the lake from the highest viewpoint available. Tsen Pagoda provided the perfect viewpoint. We were able to drive the bike up most of the way, but we had to climb the last 570 meters on foot to get to the pagoda. The trail leading up to the pagoda was cool and shaded, which was nice because it was a bit of a climb. It’s gorgeous, though. There are lots of trees, flowers and ferns on the way up and it’s very quiet and green. When we got to the top, the entire area was covered in blinding white pebbles. The pagoda seems larger than 46 meters and the white pebbles made all the colors jump out. 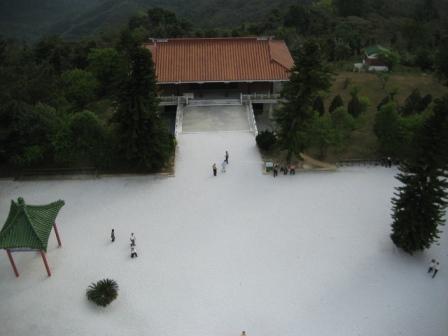 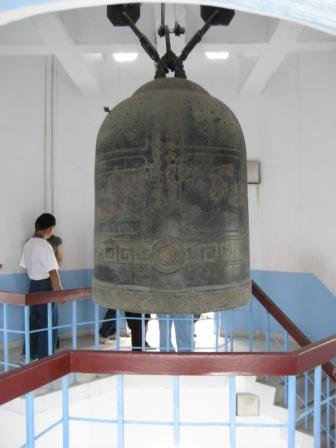 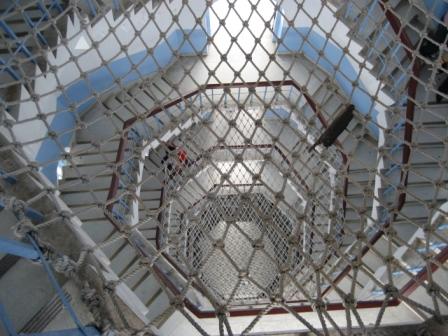 An interesting view of the netted staircase in the pagoda.  I also noticed this netting in a couple of places in Toroko Gorge as well. 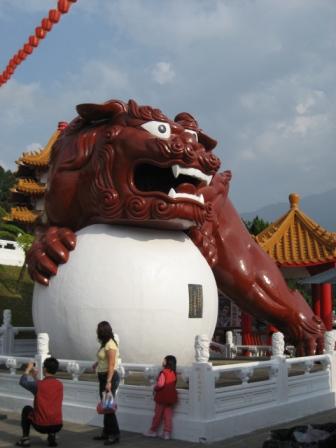 My lovely lion guardians again!  I’m always pleased to these mythical creatures. This one and its mate stand guard over Wenwu Temple. They are the largest in Taiwan. 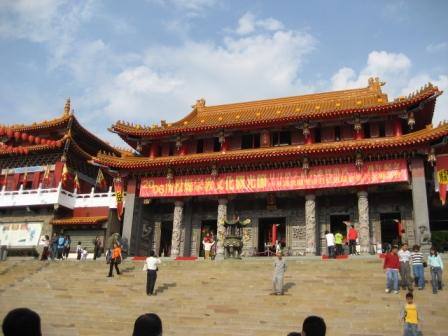 Wenwu Temple is a Taoist temple dedicated to Confucious and Kuan Kung, the red-faced god of war.  It’s a temple of martial and literary arts.

This beautiful historical stairway is located across from the entrance to Wen Wu Temple. Originally, visitors had to take a boat and climb 366 stairs to make the pilgrimage to Wenwu Temple. If you look closely, you can see that these bells are hung on wrought-iron ladders. Each ladder represents a year of birth.

You can buy a set of these blessing wind bells in Wen wu Temple. Write your prayer on the wind catching paper and then hang your bell on the approprate age ladder. The wind will send your prayers to the saints and gods of the temple. 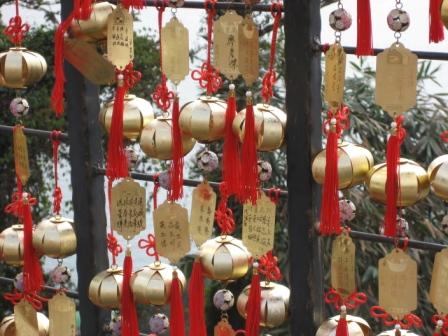 Prayers on the wind.

I’m a little sad that we only had the day to explore Sun Moon Lake. We only just got our toes wet on this trip. We had a chance to take in the sights, but we really didn’t have enough time to properly explore as much as I would have liked to. I can’t complain though because John has already promised to come back with me.

I’ve got something to look forward to next year.