Taiwan Travel Photo Journal – Day 1 – A Walk in the Clouds 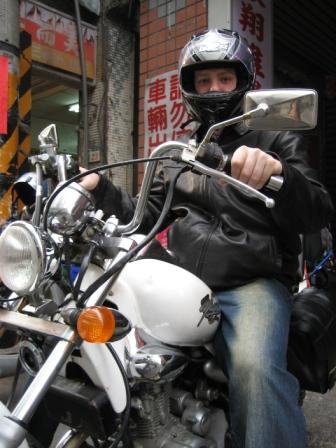 We left Shu-lin City at 8am on the 17th of February. As you can see, John was ready to roll. Both of us were filled with excitement as we headed out of the city towards Sansia and Dasi. It was a gorgeous day for riding and we didn’t make our first first pit stop until we arrived in the tiny village of Luofu which wasn’t even on our map! I actually made John pull over because I wanted to look at all the gorgeous flowers along the side of the road. 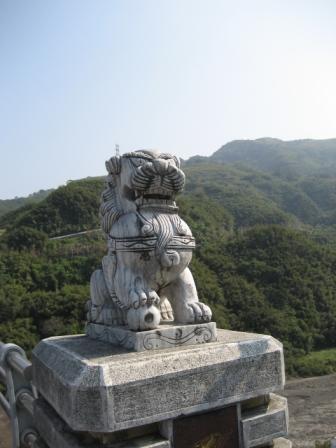 This friendly little Fu Dog also beckoned to me. These Imperial Guardian Lions are quite common throughout Taiwan, China and the rest of Asia and I still can’t resist stopping to take a look at them. They are generally found guarding temples, palaces, government homes and tombs, but nowadays you can find them pretty much everywhere. This one along with its mate were guarding the entrance onto a bridge. Fu Dogs generally come in pairs. The male holds a globe under its right paw and is thought to guard the structure, while the female usually holds a cub under her right paw and protects the people within. I love them and think they make a charming addition to any home.

Taiwan blooms. I saw these smiling beauties everywhere during our travels. Flowers never fail to fill my heart with joy. 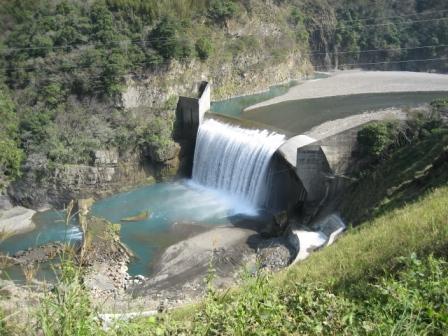 We drove up into the mountains and felt the sun warm our skin. It was simply a gorgeous day to be outside and neither one of us wanted the day to end. We had the road to ourselves and very rarely passed other vehicles for the first four hours of our journey. Occasionally we’d see a truck load of folks go by and they would wave and shout happily at us. People seem much friendlier outside the city of Taipei.

The Shimen Reservoir Scenic Area is a virtual treasure trove of rushing streams and rivers, huge tree forests, quaint little bridges and hot springs. We stopped to admire and gaze in wonderment every forty-five minutes or so. We knew we’d need plenty of breaks in order to complete a full day of riding and were more than happy to oblige whenever we fancied. 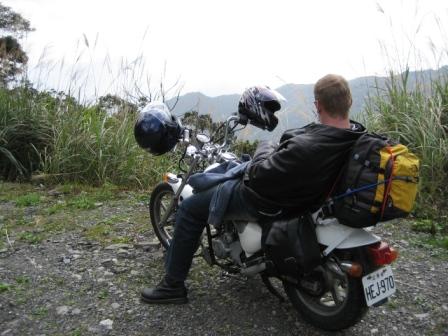 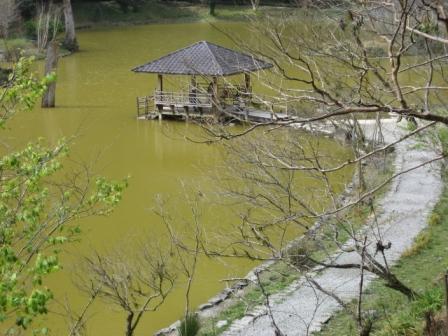 We found this quiet little mountain retreat high up in the mountains somewhere near Szji.

Eventually, we were so high up in the mountains I was able to watch a giant hawk tracking its prey. It swooped and soared on the wind and then found a perch on a lone tree high on the mountainside. Taiwan is teeming with National Parks and I was astounded at the variety of flora and fauna that we saw while driving that first day. I felt a little bad for John because he had to do the driving and wasn’t able to sit back and enjoy the passing scenery. Eventually, we reached a quiet mountain retreat high up in the mountains. We met a few other bikers who had stopped along the way for a quick break. 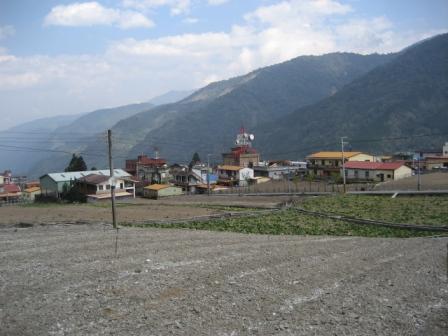 After five hours of riding, we stopped for a bowl of noodles in the mountain village of Nanshan around 2pm. Both of us were starting to feel the effects of being on the bike for so long and we still weren’t sure how far we had to go before we reached Puli. We saw huge patches of mountain cabbage and the scenery could have been pretty if it weren’t for the miles of rubber hosing used for irrigation and the heaps of trash strewn down the mountainside.

We proceeded on through Lishan and then I lost track of all the names of the villages we passed. It seemed as though each one was named after some sort of ‘shan’ (mountain) or ‘feng’ (wind). The air steadily grew colder the higher we climbed and by 4pm we were really starting to get worried about finding a place to stop for the night. We had seriously underestimated the distance we needed to travel to Puli and were no where near our destination. We stopped at a local police station high in the mountains to warm up and found out that Puli was still three or four hours away. We had no other choice but to push through to Ching Jing and try to find m there.

READ:  Great quotes and some advice when traveling through Cambodia

We proceeded up Hehuan Mountain, one of the highest mountains in Taiwan, and never realised we would need to travel up and over its 3275m peak at Wuling! Let me remind you, we were on a 150cc motorcycle with packed saddlebags and a heavy backpack. We weren’t able to go any faster than 20km an hour. I prayed we’d be able to flag someone down if we couldn’t make it. When we saw ice, we knew we were in trouble. We were up over the clouds and had no visibility. Temperatures were freezing. We were scared and tired after driving for seven hours. I was terrified we were going to drive off the road and over the edge of the mountain. Our visors were up and our faces were covered with frost when John finally got us down. I could have cried with relief. I have never been so scared in my life.

Once we were out of the mountain pass, we were happy to see that we could continue our journey to Ching Jing with an hour of daylight left. We stopped to take a look at the magnificent view and look at the rubble of a recent landslide. We hugged with happiness at being alive and admired the strange cloud formations below before continuing on to Ching Jing. We stopped for several breaks within that last hour and finally arrived at a tea house in Ching Jing where the kind owners pumping our freezing bodies full of piping hot jasmine tea and called us all kinds of crazy. We found a quiet little B&B and the owners came out to greet us. Within minutes, they had us set up in a cheery rustic room with a giant bed. Then they prepared an amazing traditional Chinese meal for us. I had the longest shower of my life and we were asleep by 8pm exhausted from traveling over 250km in 10 hours.