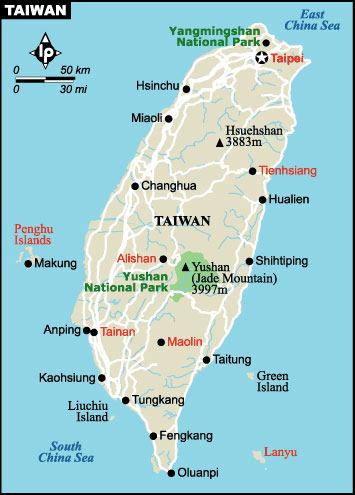 We’re finally on vacation and we started it off tonight on a double date with Anna and Druvha. We enjoyed a great meal at a Japanese restuarant in Banciao and headed to the bowling alley for a few games before packing it in for an early night. On our way home, we stopped off at Asia Helmets to buy some brand-new full frontal helmets for our five day excursion around the fair isle of Taiwan by motorbike.

So far, the route planning hasn’t caused any problems, at least, not for me. We’re going to drive to Nantou to spend a few days exploring Sun Moon Lake. Then we’re heading across country to Hualien on the east coast to see Toroko Gorge. We’re spending another two days in Yilan before heading home to Taipei. John has taken care of the route details. I’ve been in charge of finding hostels.

We were only able to locate a few hostels with rooms.I’m not sure what the quality will be like. Hotels have been booked solid for months.  I made our reservations a few weeks ago and we phoned again last night to confirm again. Everything is set, except for one little snag.  The owner of our hostel in Hualien wanted us to mail him the money for our rooms today! It’s Friday and we check in on Monday. I didn’t mail the money because it sounded a little fishy to me and because the money wouldn’t arrive before us anyways. Now I’m just praying that we have a place to sleep on Monday night after being on the bike for six hours.

Packing has also been a bit of an issue as we really have to pack light. Our saddlebags are small and we can only fit 5 kilos on the luggage rack. My stuff isn’t a problem, but John’s is. One pair of his pants is the same size as all the clothes I’ve packed for the trip! So far, we’ve managed to pack the basics (undies and socks), an extra pair of pants, a cotton undershirt, and an extra long-sleeved cotton top, a T-shirt, a swimsuit for the hot springs, a pack towel, a hat, sunglasses, a first-aid kit and a few toiletries. Plus we’ve got a camera, my journal, some playing cards, a book for each of us, and of course, plastic bags, duct tape, bungees and ties.