Lunar New Year and the Art of Giving in Taiwan

Lunar New Year is coming and the flurry of activity and excitement  in Taiwan that precedes the biggest Asian holiday of the year is staggering.  This year, the New Year falls on February 18th.

Lunar New Year is always on the first day of the first month of the lunar calendar. The holiday is also referred to as Chinese New Year, Spring Festival or ‘chun jie’, which is what I referred to it as in China.

Streets, storefronts and homes are blossoming in the lucky color red, which is believed to bring good luck and success.

Red diamond shaped ‘fu‘ banners are being hung upside-down in doorways and around the house to welcome the New Year and symbolize happiness and luck.

I’ve also seen images of peach and plum blossoms, narcissus, bamboo, chrysanthemums, lotus and kumquat plants, all of which are thought to bring luck, prosperity and longevity. 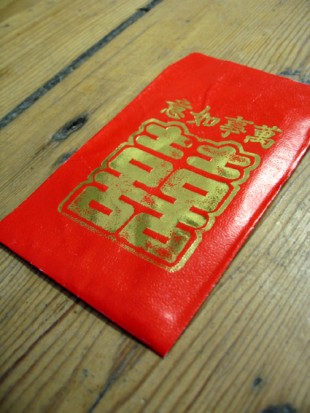 Last week, I asked one of my students to tell me a legend or story about Chinese New Year.

After some careful thought, he told me the ancient story of ‘nian,’ a man-eating monster who silently crept into homes and stole children away.  People eventually discovered that the monster was scared of loud noises and the color red, so firecrackers were set off, houses were decorated in red and people dressed in red to keep the monster away.  ‘Guonian‘ means ‘passover the nian’ and they have been used as New Year’s customs ever since.  It’s a scary story, but rather charming in its own way.

My students are particularly excited about spending time with family and receiving ‘hong bao,’ also known as red envelopes. Generally these are given to children and young singles by seniors and married couples.

Red envelopes always contain money for the New Year. The amount usually varies between a few dollars and several hundred. Money is always given in even numbers and, I was told today, usually has an eight in the total sum. Eight is considered a lucky number in China because it sounds like the word ‘fa’, which means ‘prosper’ or ‘wealth.’

Red envelopes are a Lunar New Year tradition, but are also given during special family occasions like weddings. They are usually covered with lucky symbols for good fortune. Red envelopes can also be given to friends and as a bonus for good work. They are an excellent way of gauging the importance and strength of a social relationship.

READ:  Through the Dragon's Eye

I received my first hong bao last week from the family of a little girl I tutor once a week. Her parents gave me a lucky red envelope and I also received one from her aunt, both containing a substantial amount of money incorporating the lucky number eight in the total.

When I talked to my Taiwanese friends about this gift, they were surprised that the family had given me so much and indicated that they must think a great deal of me to be so generous.

Today, I returned the favor by presenting the family with some traditional gifts of fruit, cookies and tea. They, in turn, have asked John and I to join their family for dinner over the holidays.  This is truly an honor and will be a first for me in Taiwan.

Double Trouble! Might as well feature both Emma Do