Lately, one of my favorite past times in Taiwan has been visiting local Taoist temples, which can be found in almost every nook and cranny. I rode my bike to the main Taoist temple here in Shu-lin to take some photographs of the magnificent artwork featured on every available surface within the compound. I am literally entranced by these temples and spent hours today wandering around admiring the multi-colored hues of mythical creatures and local deities. It’s like looking at a story book in real life. Each day, I’ve devoted more and more time to getting to know all the mythical faces, creatures and sacred objects that are the essense of Taoism. I’m completely and utterly captivated. 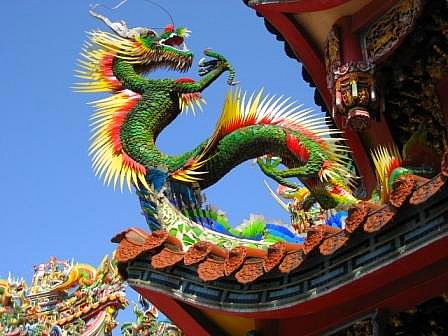 All of them are special and unique and lately, I’ve been making a real effort to seek out these wonderful places of worship just to learn the stories that each one tells. It has inspired me to do more research into the wonderful world of Taiwanese folktales and legends. In addition to being places of devotion, temples in Taiwan are magnificent displays of art. There are sculptures, paintings, lanterns, statues and ceramics encompassing one breathtaking and unique space. These majestic works of art are primarily for guiding worshippers on the path towards spiritual enlightenment, but anyone can go to experience these most unusual and defining works of art in Taiwan.

These magnificent dragons encircle a flaming pearl. Dragons are revered as gods throughout China and Taiwan. You can find dragon images almost everywhere you look. Dragons represent cosmic energy, as well as imperial wisdom, which is why they are often used to represent the Emperor. There are several enchanting stories about dragons and pearls. Sometimes the pearl is depicted as the moon. It is thought that dragons are obsessed with the moon because they believe it is a giant pearl. Several stories tell of dragons going insane from trying to remove the moon from the night sky. The pearl is also thought to represent a dragon’s wisdom, hence the term, ‘pearls of wisdom’. If you’d like to learn more about dragon mythology, this website has some wonderful stories.

This is just one of the local deities that can be found at the entrance of one of the local temples here in Shu-lin City on Bao-An Jie. I counted eight in total. Perhaps they are the Eight Immortals? I don’t really know enough about this legend to make an educated guess. What I do know is that each temple has its own special gods and guardians that provide protection to the area in question.

I came across a lovely hand-carved stone peacock on the back of one of the walls. It isn’t immediately discernible to the public eye unless you are specifically looking for it. Then I started to notice peacocks and the image of the phoenix everywhere.  Peacocks represent dignity and beauty. They are often associated with grand ladies. The dowager Empress of China, Tzu-Hsi, was a fervent admirer of peacocks.

The symbolism and stories associated with these temples are simple and romantic. They offer a wonderful glimpse into the heart of Taiwanese culture and religion. These temples are just one of many things that make Taiwan truly special.

8 thoughts on “Taoist Symbolism in Taiwan”