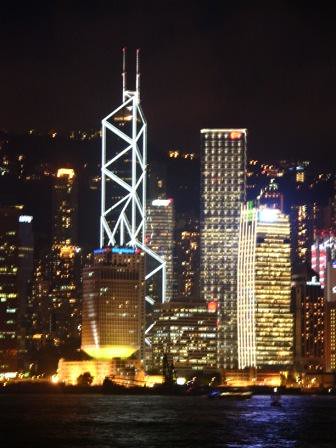 Hong Kong is in a class all on its own. We traveled there this summer and honestly, I’ve never been to another city like it. After spending three years in China and having recently moved to Taiwan, I knew I would be ready for the constant bombardment of all things Chinese – the lights, the noise and pollution, the crowds of people and unfamiliar food. What I wasn’t prepared for was the duality of both worlds co-existing in this big, beautiful city. It really is a pulsating blend of East meets West.

Victoria Harbour, by day or night, is simply marvelous. I could go there every day and never get tired of the view of Hong Kong Island from the promenade. This, folks, is where people come to capture Hong Kong’s incandescent skyline. It’s a superb place to people-watch. Locals, expats and visitors all gather here to find their own special niche in this unique place. Even with hundreds of other admirers, I still got the feeling that we were on our own. We had a wonderful time strolling the promenade and looking at all the gorgeous boats and watercraft in the water. The magical hour here is 8pm, when an eye-dazzling light show starts. For a few minutes, the flashing multi-colored skyline breaks the sky into a million pieces. The light show is currently the largest of its kind in the world.

more
READ:  For My Grandmother,

Referred to by some as the Oriental Pearl of Asia, Hong Kong perfectly mixes ancient Chinese cultures with a modern and westernized...