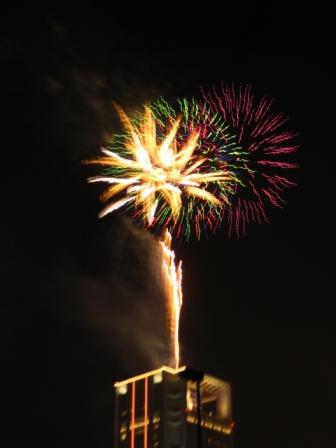 New Year’s Eve 2007 in Taipei was something special this year. We couldn’t help feeling the energy and a sense of excitement as we made our way onto downtown streets loaded with happy party-goers. Everyone was eagerly awaiting the final moments of 2006.

With crowd numbers swelling to almost 500,000 strong this year, traffic literally ground to a halt as we made our way on foot to the corners of Renai and Guangfu Streets in downtown Taipei. The free outdoor rock concert sponsored by Taipei City Government was already swinging into full gear with Jolin, the reigning Mandopop princess of Taiwan, when we arrived shortly before 11pm.

The final moments of 2006 were counted down by musical talents Jolin and Mayday.  Mayor Hau Lung Bin and Taipei City officials also joined the countdown.  The crowd went wild as the first three minutes of 2007 were ushered in with the bang and boom of over 10,000 firecrackers at a massive pyrotechnic firework display at Taipei 101. The world’s tallest building looked like it had caught fire as fireworks spewed from every corner and crevice.  It was enchanting.

Shortly after, the surrounding downtown buildings set off their own firecracker displays as the rock concert resumed and Mayday took the stage. Traffic had literally ground to a halt as we made our way out of the area. Buses and cars were stranded in the middle of intersections and halted for ages as hoards of people flooded into the streets.  The only things moving in the streets of Taipei were those on foot and on scooter. We were literally swept along with the crowds and remained on foot for most of the evening. It was an amazing night out and an unforgettable way to start 2007.

Spread the love
READ:  The Sanyi Woodcarving Festival in Taiwan